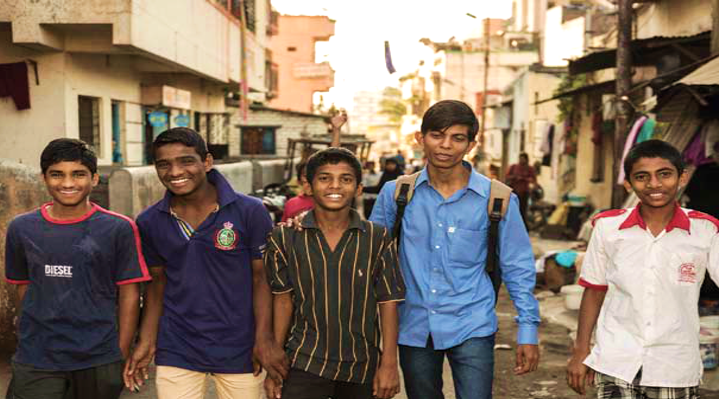 If you are lucky enough to have a genuine dialogue with a young boy, say the authors, you will notice that a young man is a gold mine of dreams, aspirations and wisdom. The Equal Community Foundation (ECF), based in the Indian city of Pune, has been that lucky—engaging with more than 4450 such young and bright minds for the past seven years. They found that working on gender equality issues with adolescent boys between 13 and 17 is both exciting and challenging.

In India, it is essential to understand the complexity of social dynamics impressed upon a child, even before s/he is born. It is no surprise then that traditions and customs, both social and religious, often take precedence over every other form of social thought. This presents a unique dilemma, often placing women in an unaccountably vulnerable situation. Beginning with the reality of child marriage, underage mothers experience additional social limitations imposed on women and girls. Almost every form of gender discrimination is inextricably woven into Indian society’s social fabric. By the time they reach adolescence, young girls and boys have witnessed so much gender discrimination that they have not just “normalized” it, but also, inevitably, internalized it. But being young also offers an opportunity to question and challenge the way youth are expected see their world.

Engaging men and boys to consider gender equality is critical as it produces positive changes in attitudes, perceptions, and behaviors. Yet it fosters a unique two-pronged dilemma: How do we ensure that we are actually transforming attitudes and behaviors of men and boys to make them gender equitable? How do we ensure that we aren’t reinforcing the power dynamic of an already empowered group by providing them with more opportunities and social skills?

The Equal Community Foundation aims to give men and boys the opportunity to become gender equitable. To that end, ECF develops gender-transformative programs for boys, amassing convincing evidence that demonstrates why these programs are important, and providing an effective solution to the problem of violence and discrimination against women and girls. We do our work in partnership with different organizations that work on a range of gender discrimination issues such as human trafficking.

Action for Equality: Addressing Inequality at the Roots

Since 2009, ECF has implemented Action for Equality, a gender-transformative education program, in 20 low-income communities across Pune, a metropolitan city in western India. What do we aim for? To ensure that women and girls are free from gender-based violence and feel safe even from the threat of such violence in the communities in which we work. To do that, we mobilize adolescent boys to identify harmful gender norms and to take action to promote gender equality in their homes, schools, colleges and communities through a three-step yearlong program: Foundation Program, Action Program and Leadership Program. Program mentors are trained to create safe environments in which adolescent boys feel supported to learn and debate about these issues in their community. Through dialogue with their peers and mentors, boys go through a process of self-reflection of their own attitudes and actions regarding gender and become agents of change in their communities.

“When I think of how far I’ve come, I’m amazed. I used to be one of those boys in a group who stand on the chowk (street corner) using swear words. And the way I used to look at girls… whistling, singing songs when they passed by, they used to ignore me as they walked by because I was known as the Chhapri and Tapori (hooligan) boy in my neighborhood. I thought it was normal. However, I started questioning my attitude and behavior when I joined Action for Equality. After being a part of the program for more than a year, I organized gender awareness plays in my neighborhood. Today, I have an identity of my own there. While I was once considered a vaya gelela porga (good for nothing boy), today, people ask me about events and share their experiences and problems with me. Above all I feel trust.”

Eighteen-year-old Manoj Rathore had a question: If women had rights on paper, when would these rights translate into reality? Even though every Indian has the right to education, one out of five Indian girls drops out of school because education is not considered “necessary” for her.

“I observed a seven year old girl in my community didn’t go to school, but her brother did,” Manoj noted. “In the Action for Equality Program, I learned that every person has the right to education. So why not her?” asked Manoj, a leadership program participant. He was determined to stand up for the little girl’s rights. “I approached her mother and asked her why she wasn’t sending her daughter to school.” The mother, who worked as a housekeeper in Manoj’s neighborhood, said her daughter “was more of a help to her at work than in school,” Manoj said. He began talking to the mother. “I tried to have a dialogue to persuade her to send her daughter to school.” And he did. Not once. Not twice. But every day for several weeks.

“After a month, her mother finally agreed to send her to school. I was overjoyed by the news!” Not content with only enrolling the girl in school, Manoj also checks on her progress every day. Young men like Manoj, standing up for women’s rights, have the potential to be long-term allies in the fight to end violence and discrimination against women. One day, young men like Manoj may no longer be unique but the norm.

Does Our Approach Work?

We have evidence that our approach is working and boys are changing and challenging themselves, their peers’ and families’ inequitable customs. Here are a few findings from three cycles of intervention, which represent one year (2015–16) of program implementation in 20 low-income communities in Pune:

Despite our success, working with boys on gender equality with the transformative approach remains challenging. One of the greatest challenges lies in unraveling the knot of harmful gender attitudes and norms so deeply woven into the fabric of society. Existing gender norms are so deep rooted that even when participants are able to identify them and motivated to take action, they face backlash from their family and friends. The process to create more awareness in the community, to gather support from the community to challenge existing gender norms, takes time. We have learned that creating enabling environments is key to gather support for the boys. We also focus on equipping them with skills to overcome backlash.

At the grassroots level, gender equality is not a priority. Community members usually don’t see how gender programs meet their aspirations for education, job training, a good job. That each of these issues is tied to gender discrimination often goes unnoticed by community members unaware of the connections. As a consequence, convincing boys and their parents to encourage participation is a constant challenge. Program mentors face the ongoing challenge of enrolling boys in the program; they meet it by highlighting program benefits to the parents, describing positive behavioral changes they can expect to see in their sons. Engaging parents directly has more often than not turned the situation around.

How do you retain a young man’s enthusiasm for a 15-week program? And how do you keep doing it over the course of a year? While the age group we work with—13-to-17- year-olds—is a fertile age to influence attitudes and behavior, challenges include keeping their attention and interest. Both the content of sessions and how we engage them are essential to sustaining interest. Sessions are activity based and participatory. We constantly update our curriculum, tools, and mentors’ facilitation skills. Most importantly, we have learned to create the safe space young males need but do not have access to—a space where they can express themselves without the fear of being judged, somewhere they can share their personal stories and struggles.

Have we had a long-term impact in dismantling patriarchal and other harmful social norms? Results are inconclusive to date. We employ robust monitoring and evaluation processes integrated into our programs, and indicators and replicable tools to trace change. For nearly two years we have used a self-developed monitoring and evaluation framework to collect evidence of changes in knowledge, attitudes, behaviors and actions. We are committed to continuing to collect data and to documenting stories of change from the grassroots. We will continue to share our findings and contribute to further developing gender-transformative programs and approaches.

As Mahadevi, a participant’s mother, said: “If we can train young men to respect women, there is hope yet.”

Danit Shaham is program director for Action for Equality at its Equal Community Foundation (ECF), where she coordinates performance and quality for the program.

Anjana Goswami is program and team development manager at ECF, responsible for developing the Action for Equality program.

Rucha Satoor is communications associate at ECF, responsible for stories from the communities ECF works with to reach larger audiences. For more, go to www.ecf.org.in or write: rucha.satoor@ecf.org.in.

A Message from the MenEngage Alliance Global Secretariat