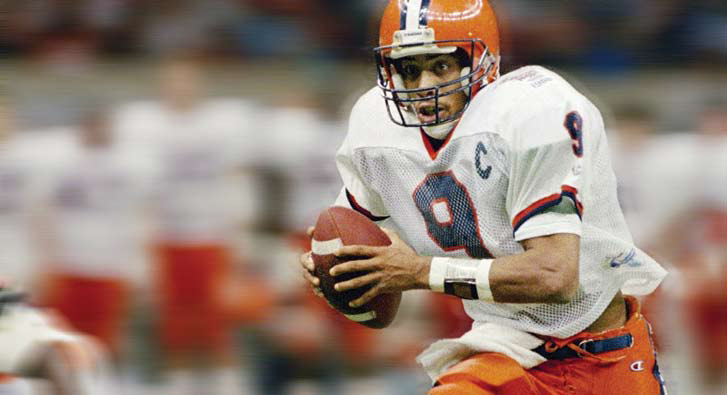 It’s unlikely that Don McPherson, an All–American college quarterback who also played for the Philadelphia Eagles and Houston Oilers in the NFL and in the Canadian Football League, knew that his shining athletic career would merely be the prelude to his most impressive act of leadership—his life’s work helping men and boys find the courage and skills to become healthier and more well-rounded human beings. He’s been working to transform manhood and masculinity for the past three decades.

Jackson Katz met Don in 1994 when he arrived at Northeastern University’s Center for the Study of Sport in Society in Boston. “Don had been hired to co-direct another program at the Center,” recalled Katz, the writer-activist and Voice Male advisory board member. “We began just talking at the office and sometimes after work. I was then running the Mentors in Violence Prevention (MVP) program that I’d started the year before. It was the first large-scale gender violence prevention program in college athletics. Don had attended some presentations and workshops that Byron Hurt (like Don, a former college quarterback) and I conducted. I think I could see from those first times talking with Don about feminism—and masculinities and the intersections of race and gender—that he was exceptionally thoughtful, curious, and open about all of these issues.

“I was especially impressed because of his background,” Katz said. “Before he arrived at the Center he was clearly committed to using sport as a vehicle for working with young people on social issues. But in those early days I had no idea he would become such a passionate and committed activist-educator on the issues of men’s violence against women and others related to masculinity and violence.”

What follows is an excerpt from Don’s new book, You Throw Like a Girl: The Blind Spot of Masculinity.

The Socialization of Boys

When I first began this work, shortly after retiring from football at age twenty-nine, I probed my life for lessons that instilled in me what it means to be a man. None of what I found was positive or affirming. What I unearthed was shaming language, bravado, and stoic posturing. That’s when I arrived at the quintessential insult to boys: “You throw like a girl.” It succinctly illustrates the foundation of men’s violence against women: the belief that girls and women are “less than” and the unspoken suppression of boys’ emotional wholeness.

The more I asked the question, “What does it mean to be a man?” the more salient and important that insult became in confronting misogyny and sexism’s direct link to violence against women. In fact, it led to a deeper, inescapable truth that we do not raise boys to be men, we raise them not to be women—or gay men.

In examining this profound truth over recent decades, I am troubled to have found that we raise boys expecting them to devalue girls; it’s an absolute requirement of being male. Eventually, “You throw like a girl” became more than a framework for my lectures and led to critical follow-up questions: How do we raise boys to be whole men without degrading our daughters in the process? How do we change the narrative about what it means to be a man? How do we get men to understand that being a “real man” and a “whole man” are not mutually exclusive identities? 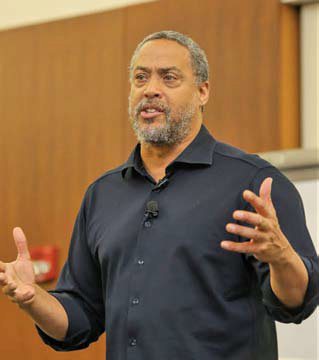 To truly be accountable to women and confront the core elements of misogyny and sexism, men must relinquish the mythical intent of chivalry—the protection of women.

It is important to note that I write as a cisgender heterosexual man aimed at reaching other cis heterosexual men. This focus is not meant to exclude nonconforming individuals but to identify and examine the trenchant dogma of masculinity that leads to men’s violence against women, and the impact this narrow understanding of masculinity has on the healthy development of boys.

Throughout this book I use the word “masculinity,” even though it is too often used inaccurately as a monolithic term for the characteristics of men. More broadly, “masculinities” account for the differences between and among men, yet we must acknowledge that we do not deliberately nurture boys as whole beings who are impacted by and possess a wide array of gendered qualities. Instead, we give them rigid commands and demand they conform to a strict set of behaviors and beliefs, which comprise what I call the mandate, performance, promise and lie of masculinity. Together, these four tenets, which I explore in this book, constitute the dogma of masculinity—the expectations of male behavior and how it can earn for men the privileges of a patriarchal culture. Men are expected to categorically accept this privilege without understanding how or why it’s achieved. How do men understand privilege they have not earned? If male privilege comes at the expense of women, is it truly privilege (and does it belong to men?) or is it more accurately defined as oppression?

I’ve realized the key to drawing men into a sustained dialogue lies in adopting a more aspirational approach to discussing masculinity. We need to be for positive outcomes, not simply against bad things that have occurred.

There are many negative terms to describe masculinity (“privileged,” “hegemonic,” “toxic,” “violent”) as well as ways to address it. (We must “redefine manhood,” “confront toxic masculinity,” “challenge patriarchy and male privilege.”) None of these constructions are positive and they only condemn the fundamental way in which men’s identity is formed and lived. Furthermore, this language might only exacerbate men’s defensiveness on gender issues. 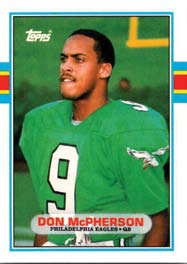 I believe we need to engage men in a new set of terms that are aspirational and more accurately representative of the wholeness of men. Our approach needs to be deliberate and intentional. We can no longer allow good guys to be defined by the nobility of emotional abstinence or those who do not consciously harm others. We must be aspirational and courageous as we raise future generations of boys to be emotionally whole and fully actualized men. If we do this honestly and courageously, we will find the depths of our humanity: vulnerability, fear, insecurity, and love. We will discover that we care deeply, fear viscerally, and love irrationally. But we will also see very clearly how we deliberately and systematically stifle this truth simply to uphold something we have never truly acknowledged or questioned: how masculinity is governed by the dogma of patriarchy.

Although understanding masculinity has increasingly become a part of the work to end men’s violence against women, it continues to lack the priority I believe is necessary for sustainable cultural change. That work is informed and directed by the experiences of women who have survived men’s violence and those who advocate for all women and their rights to safety and equity. Men are enlisted by women with a set of priorities strictly aimed at eradicating the culture and behaviors of men that harm women’s lives. Underlying this strategy is an appeal to men’s sense of duty and protection of women. I refer to this as “protective patriarchy”: a noble sense of male identity that comes from our prescribed roles as protectors and providers.

As men working in the “prevention” field, we often refer to our role as “allies” to women who need to remain accountable to women. We are allies because our charge is defined by the experience of women and it is at the behest and beseeching of women. Therefore, our role is in support of their work and their perspective. While we ultimately endeavor to engage men, this dynamic, in many ways, distances us from men. Since men don’t voluntarily come to this discussion, there is an inherent loss of accountability to and solidarity with them. Male “allies” are challenged to remain steadfast and unwavering in the protection and advancement of women’s lives and rights while finding solidarity in a cultural environment in which those rights are regularly violated. This is where accountability to women can cloud men’s authenticity: sensing the urgent imperative to confront violence, we seize upon the rare moments to engage men but ignore their complexity. We want men to use their protective “instincts” while ignoring the fact that protective patriarchy is not instinctual but rather a product of a set of learned behaviors that narrowly define masculinity. To sincerely and authentically engage men, we must have an honest conversation about masculinity.

Most men will quickly and readily agree that violence against women is wrong and that something should be done to stop it. Some men will only assume such a stance to appear politically correct or to offer up a predictable, vigilante-style bravado. Other men are truly sincere and act out of a sense of deep caring or hurt from having witnessed firsthand some form of violence against a loved one. However, what men do not always want to deal with is a solution that demands scrutiny of their own behavior and privilege, even in the context of doing what they know is right. So when the topic turns from the problem they can “see” in others to the problem they ignore in themselves, they become rigid and reticent.

In other words, when they have to be accountable to themselves as opposed to chivalrous to women, men feel incriminated. The pushback is immediate. This is the blind spot of masculinity: the defense of narrowly defined masculinity that keeps us from exploring and living a more whole, complete version of ourselves. How do we move beyond the protective patriarchy that brings them to the discussion to a more fulfilling conversation about the wholeness of masculinity?

To authentically and truthfully process this question, we must first consider the way in which men are taught to care for girls and women. In other words, to truly be accountable to women and confront the core elements of misogyny and sexism, we must relinquish the mythical intent of chivalry—the protection of women. This would strip away the notion that women need the violent, obstinate, and overbearing qualities of male power and privilege for their protection and purpose. We must do this not because women implore us to do so, but because we truly care about the healthy wholeness of boys and men.

The approach must focus on helping men become better men. In most life endeavors, we work and train to attain excellence, not just success in the moment; in sports and academics, we work toward excellence, not the prevention of failure. Moreover, we do not train for victory by a discernible margin but by mastery of a discipline or performance. We must apply the same vigor for excellence when considering the ideology of masculinity.

That is why I believe there must be a “pivot,” a shift in the conversation from what women have asked men to do and toward a more trenchant, robust, and sustained conversation among men about the aspirational and essential values of masculinity. This must occur devoid of assertions of culpability for violence against women and focus intensely and intently on nurturing purposeful, healthy, and whole masculinity.

We should be asking more what boys and men can become and asking less about what they should or shouldn’t do.

Excerpted from You Throw Like a Girl: The Blind Spot of Masculinity, Akashic Books © 2019. Used by permission.

You Throw Like a Girl is the latest title in Dave Zirin’s Edge of Sports imprint. Addressing issues across a range of sports at both the professional and nonprofessional/collegiate level, Edge of Sports aims to articulate the daily collision between sports and politics, giving cutting-edge writers the opportunity to fully explore their areas of expertise in book form. 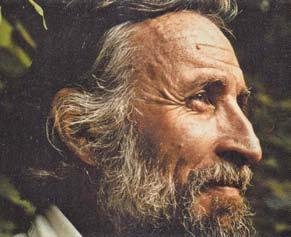 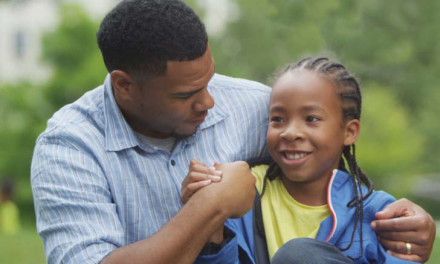