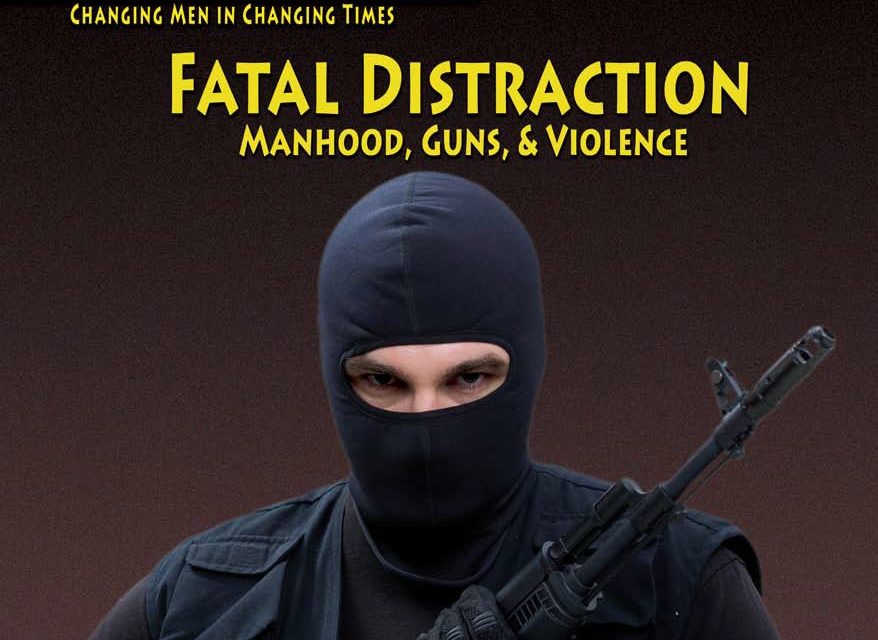 The Winter 2013 edition includes a special 16 page section that argues it’s masculinity, more than guns, videos, or mental illness that should be at the center of the national conversation about violence.

A FAREWELL TO ARMS: A SPECIAL SECTION ON MEN AND VIOLENCE AFTER SANDY HOOK

Allan Johnson
Fatal Distraction: Manhood, Guns, and Violence
As I write this, it’s been only a few weeks since the mass murder of children and teachers in Newtown, Connecticut, less than 50 miles from my home. I have grandchildren of the same age as the children who were killed. So, I’m finding it especially difficult to listen to the latest national conversation about gun violence, because, like all the others, it’s being conducted in a way that guarantees that such violence will continue.

Cliff Leek and Michael Kimmel
Suicide-by-Mass-Murder
If your only sources were Facebook and Fox, tabloids and TV, you’d likely think that guns, mental illness, and violent media were the only things worth talking about to explain the horrific massacre at Sandy Creek Elementary School. Of course, any rational approach to this problem would indicate that these three factors are important.

Phap Luu
Letter to Adam Lanza
Let me start by saying that I wish for you to find peace. It would be easy just to call you a monster and condemn you for evermore, but I don’t think that would help either of us. Given what you have done, I realize that peace may not be easy to find. In a fit of rage, delusion, and fear—yes, above all else, I think, fear—you thought that killing was a way out. It was clearly a powerful emotion that drove you from your mother’s dead body to massacre children and staff of Sandy Hook School and to turn the gun in the end on yourself. You decided that the game was over.

Rob Okun
Moving Beyond Men’s Killing Fields
In the wake of Adam Lanza’s murderous rampage, men in particular must not stay silent. There’s an epidemic in “man culture” we can ill afford to neglect, ceding center stage to the narrow gun control debate.
It’s encouraging there’s momentum in Congress to enact new gun laws. Let’s not miss the opportunity, though, to enlarge the national conversation about better regulating guns—including ammunition—to emphasize both how we raise boys and how we address the mental health crisis facing many men.

Jackson Katz
Media: It’s About Manhood More Than Guns or Mental Illness
Many of us whose work touches on the subject of masculinity and violence have long been frustrated by the failure of mainstream media—and much of progressive media and the blogosphere as well—to confront the gender issues at the heart of so many violent rampages like the one that occurred on December 14 last year in Newtown, Connecticut.

Robin Morgan
The Longest, Darkest Night of the Year
The day before the Sandy Hook mass murders, a man in China attacked 28 kindergarten students and three adults, stabbing them with a knife. Though wounded and traumatized, none died. In Newtown, Connecticut, the gunshot murders totaled 27 people—20 of them children, most as young as age six. (And the murderer then committed suicide.)

Frederick Marx
Yearning for Rites of Passage in a World with Too Few Mentors
What would you do if someone told you your son would never become a man? That your nephew would never experience maturity? That your cousin or grandson would never feel from the inside the beating heart of what it really means to be an adult male? Well, it’s happening right now, in our country, today.

From the Editor
Dancing on Our Tears
Only after we had huddled under the canopy over Sherry’s and Cedric’s grave did the rain begin to fall. It was a dark Friday night. Sixty of us, holding candles in our gloved hands, stood silently in the cemetery as Yoko Kato, a woman in her sixties with silver bangs framing a kind face, thanked us for coming. It was the 20th anniversary of her daughter, and grandson’s murders. Sherry, a 23-year-old mother, and Cedric, her 18-month-old son, had been stabbed multiple times by the toddler’s father, on January 11, 1993.

Boys to Men
The Feminine Gaze of Adolescent Boys
Teaching at an all-boys high school provides a unique window into the lives of adolescents. You are invited to participate in a culture with a language and moral code all its own. I was reminded of this recently when one of my seniors jokingly accused me of “swagger jacking,” the urban term for the act of trying to steal someone else’s popularity. It speaks to how young men constantly work to ensure that they are acting in the “right” way, following the bro code. In a school setting, this proves especially true when young men find themselves competing for the attention of female adults who serve as a pseudo-psychological experiment of sorts. They can gaze upon women in a school setting as a limited substitute for their own mother or as an ideal image of what they desire in an intimate relationship. A woman who is physically attractive and more intelligent than a student is simultaneously a threat and an object of desire to young men. In short, there is a fine line drawn in the sand between “being a babe” and “acting like a bitch.”

Overcoming Violence
Men: Which Side Are You On?
The last two weeks have provided an opportunity of re-narrating the sordid history of rape and rape trials in India. To me personally the only way to understand this sexual violence is that this is a war declared on women to achieve a range of effects that include masculine supremacy, communal revenge, caste subjugation, and even which territories are deemed part of India.

Overcoming Violence
Challenging Misogyny in India
Misogyny is so deeply rooted in India’s collective psychology that even the president’s son—Parliament member Abhijit Mukherjee—could entangle himself with a remark against women protesting gang rape.

Men & Creativity
Men Opening to Their Creative Selves
“Sad is a man who is asked for a story/and can’t come up with one,” begins Li-Young Lee’s poem, “A Story,” which describes the pain of a man who can’t respond to his five-year-old son’s request for a story. The poem evokes poignantly the emotional bind in which most of us as men find ourselves. The world has changed enough to demand a different masculine involvement. And yet, a great majority of men fall silent in the face of this demand, unable to recognize the tools we have at our disposal to respond.

Women’s Voices
Men: Join Women to End Violence
My husband said those words to me one day about 20 years ago, when the news was full of stories of females being raped—from young girls to old women. Rape was actually being used as a form of warfare from the Balkans to the Sudan, when the world began to acknowledge that the violation of women had indeed always been a bad side effect of male aggression—from grassroots revolutionary movements to wide-scale military invasions and occupations. We only need to look at the Democratic Republic of Congo to see how brutal rape as weapon of war has become.