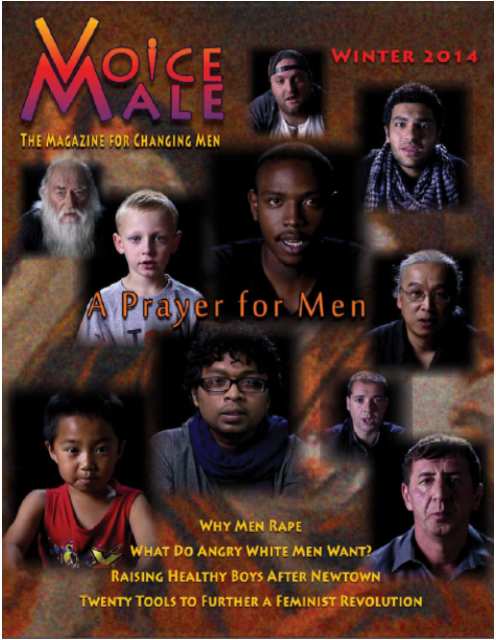 FEATURES
Joystick Warriors: Can Violent Gamers Find Peace?
Jackson Katz
Since the release of the blockbuster war-themed video game Call of Duty: Ghosts, the news media has been abuzz with reports of its aweinspiring realism and predictions about its reaching the dizzying sales heights of Grand Theft Auto V. (It couldn’t.) There has been nowhere near as much attention paid to growing concerns about the astonishing levels of interactive violence found in wildly popular shooter games like these, and what effect, if any, playing them has on young men’s and women’s belief systems—and psyches.

How Feminism Hurts Men
Micah J. Murray
Not long ago somebody on Facebook told me that feminism elevates women at the expense of men and that its agenda to validate women emasculates us guys.
He was right.
For men, the rise of feminism has relegated us to second-class status. Inequality and discrimination have become part of our everyday lives.
Because of feminism, men can no longer walk down the street without fear of being catcalled, harassed, or even sexually assaulted by women. When he is assaulted, the man is blamed—the way he dressed he was “asking for it.”

What Does the Men’s Rights Movement Really Want?
Michael Kimmel
One of the enduring legacies of the 2012 presidential election was the demise of the American male voter as a dominant force on the political landscape. The evening Barack Obama was reelected, a distressed Bill O’Reilly lamented that he no longer lived in “a traditional America anymore.” His voice was part of a chorus bellowing its grief over talk radio airwaves, the traditional bastion of angry white men. Why were they so angry? Voice Male contributing editor and sociologist Michael Kimmel, who has long been recognized for his study of men andmasculinity, spent hundreds of hours with angry white men—from men’s rights activists to white supremacists— in pursuit of an answer.

Twenty Tools for Men to Further a Feminist Revolution
Chris Crass
For all men who believe in social justice and who want healthy and beautiful lives for our loved ones—and who areworking for positive change in the world—it is time for us to commit or recommit to making feminism central in our lives, values, and actions, writes Chris Crass, a California-based activist and author of Towards Collective Liberation. Crass begins his “Twenty Tools for Men to Further a Feminist Revolution” by quoting feminist scholar bell hooks: “When women and men understand that working to eradicate patriarchal domination is a struggle rooted in the longing to make a world where everyone can live fully and freely, then we know our work to be a gesture of love…Let us draw upon that love to heighten our awareness, deepen our compassion, intensify our courage, and strengthen our commitment.” It is in that spirit that Crass issued his call for men “in the millions to take courageous action in our society to further feminist revolution.”

Too Many White Men Still Clueless At The Top
Charlotte and Harriet Childress
We recently collected signatures outside our local public library for a ballot initiative supporting samesex marriage. Of the hundreds of people we talked to, most were supportive, or at the least polite. There were, however, about a dozen people who argued with us or condemned us—and every dissenter was a tall white male, older than 50, with no recognizable disability.
While the majority of white males have rejected traditional top-of-a-hierarchy roles, when we look at the leadership of those who are stuck, most likely we find a white male. White male privilege is a universal concept that most people now understand.

Man Prayer
Eve Ensler
May I be a man.
Whose confidence comes from the depth of my giving.
Who understands that vulnerability is my greatest strength.
Who creates space rather than dominates it.
Who appreciates listening more than knowing.

Raising Healthy Boys and Helping At-Risk Men After Newton
Rob Okun
Is our country so psychically numb that news of another “school shooting” barely registers? The day before the first anniversary of the gut-wrenching Newtown massacre, an 18-year-old male shot another student and then killed himself as a sheriff’s deputy closed in on him, foiling his plans to use a backpack full of weapons and ammunition on students and staff at a Colorado high school. The young woman died four days later. And, early in the new year more shootings occured in Albuquerque, New Mexico, West Lafayette, Indiana, and Philadelphia.

Women Are Not Guys
Allan G. Johnson
When a society is organized around the idea that one group of people is inherently better than another, it goes without saying that injustice and unnecessary suffering will be the main result, with patriarchy and male privilege being the oldest living example.
Gender inequality is everywhere, from who cleans the house and takes care of the kids to politics, work, religion, and science, to the epidemic of men’s violence against women in the military and everywhere else.
I’ve been paying attention to this for a long time, and have noticed some strange things about how it works. Perhaps the strangest is how systems of privilege manage to keep going while at the same time being based on complete fictions about who we are.

My Cuban Revolution
Ethan Corey
Although the distance between Cuba and the United States is less than 100 miles, step off the plane in Havana and you have entered another world. Flashy ads, new cars, new technology, and all the latest styles are absent from the landscape. You are surrounded by public art displays, political billboards, old American clunkers rolling tentatively down the street, people talking on hand-me-down phones and wearing used clothing. American excess replaced with Cuban thrift.

From the Editor
Profeminist Men and “The Great Turning”
I’ve long believed that those of us committed to social change—whether achieving gender justice, restoring a threatened democracy, or healing an endangered planet—have greatest success when we accentuate the positive. The bad news seems to take care of itself. At the same time, every day there are committed people around the world advancing a counternarrative—promoting what David Korten years ago dubbed “the great turning.” I’m not suggesting we ignore bad news—Steubenville and Sandy Hook, for example, make that impossible. Still, the media (Voice Male included) have a responsibility to strike a balance and for the most part good news is too often still under the radar.

Books
Home Front Heroes
The horse opera and soap opera, then, embody two of the most important American traditions, the frontier and the hometown. But the two traditions are split rather than fused. They show radical separation between business and society, between action and feeling, office and home, between men and women, which is so characteristic of industrial man. These divisions cannot be mended until their fullest extent is perceived. —Marshall McLuhan,
The Mechanical Bride, 1951 From a half century ago when Marshall McLuhan first published The Mechanical Bride until today, depictions of the male hero in American popular culture have followed a winding road. It has included a number of detours along the way including the hysterical glorification of American manhood in the 1950s, the dark cynicism of post-Vietnam/post-Watergate America in the 1970s, and the reactionary recuperation of victory during the Reagan era. The common theme of these widely disparate texts is determining a man’s true responsibility to society, his family and himself: in other words, an attempt to answer that American command of “what a man’s gotta do.”

Poetry
Petals And Blood
Stories, Dharma, and Poems of Ecstasy, Awakening & Annihilation
Dance, when you’re broken open.
Dance, if you’ve torn the bandage off.
Dance in the middle of fighting. Dance in your blood.
Dance, when you’re perfectly free.
—Rumi

Notes From Survivors
Why It Matters
Randy Ellison