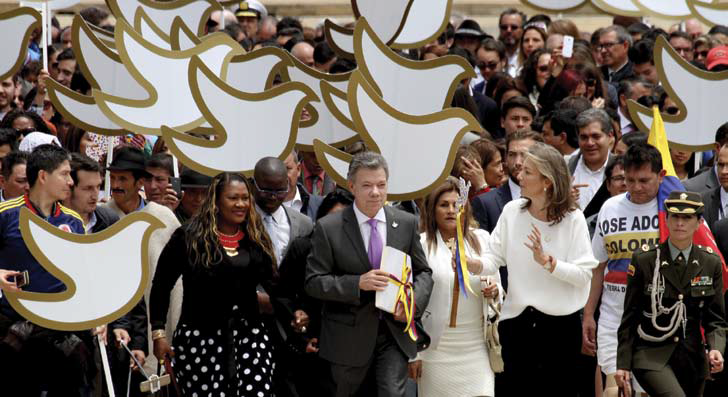 What is the first memory you have about living in a country at war? Every time I asked this question to my fellow Colombians, there is always a long pause. Then, memories begin to emerge, as if pieces of a chess game are being placed on the board. The magnitude and scope of decades of conflict have affected each of us in different, profound ways, shaping how we experience and understand the world. Sadly, the conflict has become the primary fabric that threads our stories together as a nation.

Today, this question is more relevant than ever. On August 24, the Colombian government and the leftist Revolutionary Armed Forces of Colombia (FARC) signed a peace agreement, a remarkable achievement in the face of a bloody and brutal conflict. After 60 years of war, with more than eight million victims recorded on the government’s official register, 260,000 dead, and the highest number of internally displaced people in the world.

My first memory of war was in August 1989. The television in my grandmother’s house brought the news. Luis Carlos Galán, a progressive presidential candidate, had been assassinated while delivering a speech. My mom and aunts started to cry. My grandma remained in silence, letting the words of the news broadcaster sink in. I was seven years old. But by that time, I already had been warned that “boys (and men) don’t cry” so I didn’t. I swallowed my tears. I displayed this trait—my brand of a “new masculinity”—as a peacock proudly displays its feathers.

More than a quarter century later, as I write these words in my home in Boston, I still feel the bitter taste of war. For the past 11 years, living a self-imposed exile, I have reflected critically about the way in which the protracted Colombian conflict has shaped me as a person, and especially as a man.

Historically, Colombia has led Latin America with the highest levels of inequality, and continues to be plagued by poverty and with scant public services offered by the state. Throughout the vast geography of my country, where roads end and there is no electricity or water, these are the places armed actors wielded their greatest power. They have imposed a notion that men have power because they are willing and ready to use violence. For those men, masculinity and violence are perceived as two wings of the same bird.

The last significant attempt at peace in Colombia with FARC took place in 1985, under an agreement that opened the door for several leftist armed forces—led by the FARC—to participate in politics under the Patriotic Union Party. When more than 3,500 party members were systematically assassinated, it was clear that the agreement had been a colossal failure. As such, the new agreement signed in August marks a country trying, again, to redeem itself from the demons of its past.

In previous decades, armed right-wing paramilitary groups, leftist guerrilla groups, drug lords and shady politicians emerged to challenge power, each vying to advance their own agenda. In the 1990s, the paramilitary groups grew larger in power and influence, creating dark alliances with politicians and state forces fighting FARC. It became very hard to differentiate the weeds from the garden.

On the surface, I was one of those Colombians who navigated the 1980s, ’90s and early 2000s in relatively safe waters. Because I was an only child, I was exempt from mandatory military service. I have never held a gun. My family was not affected by kidnappings, extortions or landmines. The internal war did not displace me and it did not take the lives of any of my relatives or friends. I had the unearned benefit of experiencing the conflict from the comfortable seat of privilege in a country where war was both the rule and the ruler.

However, those years left an indelible imprint on me. I became wary, suspicious of others, defensive. The ongoing experiences of violence stole my ability to trust and empathize. Day by day, I lost the ability to see my fellow Colombians as fully human. I became hardened to the growing number of people asking for money at traffic lights. I got used to the stories of killings and blood in remote areas of a vast geography. War slowly dehumanized me. Only distance and the passage of time have allowed me to regain, little by little, an urgency to rekindle my sense of empathy, to invite kindness to grow stronger within me.

In 2005, when I was a senior in college, then-president Alvaro Uribe led a massive paramilitary demobilization campaign, and stepped up the military offensive against the FARC. Uribe tried to polarize the FARC and to focus the public’s attention on a single choice: you were either with the government or against it. (This might sound familiar to many Americans who faced a similar situation during the Bush years.) However, the Colombian people’s trust in the Uribe government plummeted in the wake of the 2008 falsos-positivos scandal, which uncovered the extrajudicial killing of more than 3,000 poor young men by state forces.

In 2010, Uribe left office, leaving behind a horrific record of human rights violations and a powerful precedent: the means are less important than the end result.

It should come as no surprise that because we were living in a perpetual state of war, Colombian men came to see violence as a common instrument in their survival toolbox. Perpetrating violence was seen as valid; its use justified to prove your manhood. It included killing, torture and extreme violence by state forces, guerrilla and paramilitary groups and criminal bands, as well as “normalized” day-to-day violence—cat-calling, violence against women, and discrimination against LGTBI communities. It also manifested in subtle yet powerful ways: emasculating boys and men by insulting each other, comparing other boys and men to women or gay men. It usually worked.

Violence has become central to our understanding of what it means to be a man. It manifests in fist fights on the playground and the soccer field. It erupts on highways and city boulevards where men’s road rage is a constant menace. It is part of what it is expected of us as men to be men; no one wants to be the guy who lets others take advantage of him. Men are not necessarily inherently violent, but we have normalized violence to the point that we no longer notice its presence as part of our landscape.

The notion of what it means to be a man in Colombia has been linked to the ability to survive, to take advantage of any opportunity, even if it means bending the rules. We glorify avispados, clever, quick-witted individuals. We glorify men who find ways to take advantage of others, sometimes as drug dealers, sometimes as businessmen or politicians. We love those who make “justice” their own cause using their fists, their bullets or their words. But we also hate them. We despise them. These men represent the worst in us. Their individuality prevails over the collective and the costs of their actions are imposed on all of us. They take lives; they destroy dreams; and they foster more violence.

Our traditional notion of masculinity is also linked to our ability to protect ourselves and others. In Colombia, every 13 minutes a woman is a victim of violence. Physical, verbal and psychological violence manifests in multiple, yet telling ways. We raise men to be tough and in control; they are not expected to change diapers, clean bathrooms or care for their children. We see as normal that men openly express their feelings only when alcohol is involved. What does this mean? That intoxicating your body is an acceptable way to detoxify your soul? We tend to be more accepting of violence than “weakness” without realizing that violence is its ultimate expression.

Class is central in Latin America and Colombia is no exception. For men, this means experiencing strong social pressure to be financially successful, to provide for your family. In a war economy, the means are less important than the objectives. As a result, money flows from drugs, illegal industries, corruption, and kickbacks on state contracts. Illegal resources comingle with legal ones, and ethical lines become blurry. In such a context of rampant inequality—exacerbated by armed conflict—social mobility is rarely achieved. Men are left behind, feeling the pressure to fulfill a model of masculinity impossible to reach in a society where “anything goes” has become a national mantra.

These factors contribute to the prototypical Colombian man. However, these characteristics are not exclusive to my country. They can be found in Central America as well, where countries also have been greatly affected by ongoing violence. Resourcefulness does not come only out of deprivation—it becomes a way of life in countries where the rule of law is weak and exerting force is the modus operandi to impose your will. Women and gender minorities tend to be the victims of a hypermachismo culture. Men, including young men, are seen as the menace. It is becoming clear that in many cases, the manly thing to do is to not act out traditional masculinity and possibly die, but to leave, to head north, to begin again.

In 2010, a new opportunity emerged for Colombia with the election of current president Juan Manuel Santos. Once a loyal squire of President Uribe, Santos decided to give peace a chance and engaged in peace talks with FARC. After four years of intense negotiations in Cuba, the Colombian government and the guerrilla group reached a final agreement. Uribe, a man known for his inclinations to militaristic options to achieve peace, is the main opponent of the agreement.

Colombians had the last word, voting to reject the agreement in a plebiscite held on October 2. With only 37 percent of potential voters participating, by a razor thin margin—50.2 to 49.8 percent—the agreement was rejected. Now Colombia is confronted with a sobering, uncertain new reality. For the moment, anyway, it appears voters are reluctant to give peace a chance.

Beyond the vote, men have a key role to play in the wonderful, complex process of building peace in Colombia. It will not be easy. It demands that we have an open, sincere conversation about who we are as men, that we rethink what notions and traits of manhood we need to foster, and the traits we need to eradicate. In building peace, the end result is as important as the process, as it is in becoming a man. Each of us can start today, right now, by transforming ourselves and giving peace a chance, one man at a time.

Sebastián Molano is the founder of Defying Gender Roles, an online advocacy initiative that seeks to challenge openly harmful gender roles and norms in our societies. He has over 10 years of working experience in Latin America and the Caribbean engaging on humanitarian issues, implementing development projects, and advising on international policy. His work has focused on gender issues, elections, and international development projects. Currently, Sebastián works as a gender justice consultant and program manager for Oxfam America. He has extensive experience working with organizations including Promundo-US, the Organization of American States (OAS), Catholic Relief Services (CRS), Value for Women (V4W), and the Pan American Development Foundation (PADF). Sebastián writes in English and Spanish on topics related to gender and masculinity. You can follow him @Juansemolano @Defygenderoles.

A Brutal Truth Every Black Man Needs to Hear About Masculinity