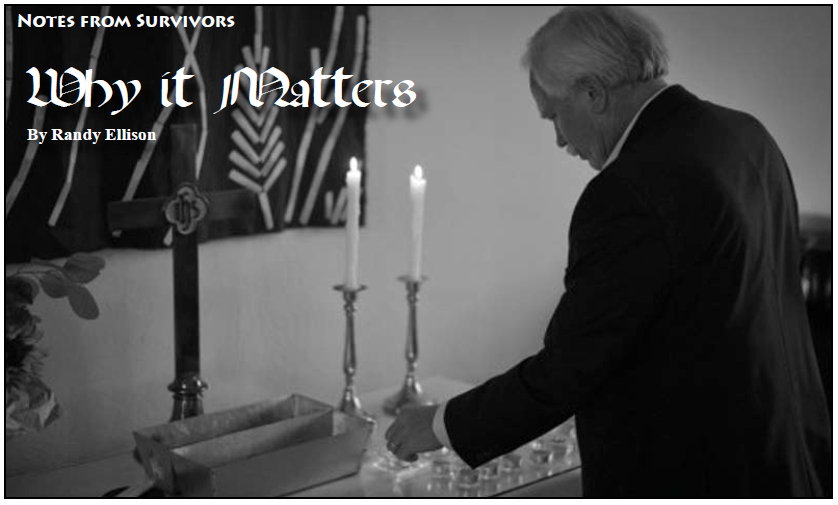 Why does it matter 40 years later that my minister abused me? Well, for one thing, when we live in denial of a major childhood trauma our reality is distorted. Before we share our story, all we can do is hold it inside our bodies. That means we carry it in our mind, stomach, liver, intestines— every cell in our body. And let’s not forget these stories of abuse have poison in them. You may have heard the expression before that not speaking our truth is like drinking poison and expecting the other person to die. In reality we are holding a mouthful of poison, which becomes more and more toxic over time. Healing can only begin when we find our voice and spit it out.

Because I had never spoken of what happened to me, every decision I made in life was in response to the trauma I had suffered as a child. In theory I was a survivor, but as long as I held on to the toxic stress of child abuse, I was acting and reacting like a victim to nearly everything that came my way in life. It was not a choice I made, it was programmed into my brain to respond to people and situations as a potential threat. I was always on guard, wary of everyone, quick to write people off.

I just heard from a 71-year-old man who said he hopes he has not waited too long to tell his story. It is never too late to tell your story! And, the person it will matter to most is you! That was true for me when I began therapy at age 57 and it will be true for that man at 71. My quality of life had suffered immeasurably, and I was just plain tired. I realized I had to want my fully liberated life back more than hiding out in the perceived safety of keeping the secret—with the poison and the pain—locked inside.

I wanted more out of life than just being a survivor; I wanted to thrive. I wanted to feel again. I wanted to have a real live relationship with another human being. I wanted to be able to love and be loved, touch and be touched. All of these things sound so very basic and yet I had given them up in order to keep my secret.

Finding a sense of justice mattered to me as well. Justice has a different meaning to every survivor, and for me reporting my abuser became important. I felt it was imperative to notify all the places he had been a minister so they could look for others he might also have abused. In the process my faith community became aware of what had happened in their building and they had the opportunity—and the responsibility—to discuss what steps they were going to take. The church did not embrace my report with open arms. I had to persist to get their attention and support; over time it did finally come. Without survivors telling our stories there can be no hope of change.

Telling your story matters more than you can imagine. Besides giving you new life and new life to those you love, it will give people you have never met the strength to share their story. And the more we share our stories, the more we heal. And the more we heal the more our families and communities heal. Imagine a world without child abuse and one filled with healthy adults. That’s how much it matters.

Speaker, writer, and author of Boys Don’t Tell: Ending the Silence of Abuse, Randy Ellison is a child sexual abuse victim’s advocate and activist. A member of the Oregon Attorney Ge n e r a l ’s S e x u a l Assault Task Force, he is former board president of OAASIS, Oregon Abuse Advocates and Survivors in Service. Randy recently received the Diane Sandler Award for his work in education, awareness, and prevention of sexual violence in Southern Oregon. Photos from The Bristlecone Project: Portraits and Biographies of Male Survivors of Childhood Sexual Abuse, https://1in6.org/men/bristlecone/.