One in three women globally experience violence in their lifetime. If gender-based violence were a disease, it would be the largest epidemic in history; 650 million women worldwide have suffered the consequences of child, early, and forced marriage worldwide. That’s the entire population of the US twice over! (https://girlsnotbrides.org/where-does-it-happen/)

The scale of human rights violations against women is unspeakably vast. Yet it’s something we must speak about, especially as men, and especially now. With an occupant in the White House who has openly bragged about sexual assault, alongside a worldwide increase in femicide, the gender power imbalance is at a breaking point.

Gender inequality touches each of our lives. Addressing the societal, political, and economic structures that disadvantage half our population is a moral imperative. The solution—upholding women’s rights—has enormous benefits for everyone. I see feminist philanthropy as perhaps the most effective strategy for addressing some of the most challenging political and economic problems that confront both men and women today.

Randomized studies of programs that improve women’s access to economic opportunities suggest that such programs can lead to investment returns of $7 for every $1 invested. As the World Bank has put it, “Gender equality is smart economics.” The compounded returns from investing in women manifest in politics as well. When women are included in peace processes, a peace agreement is 35 per cent more likely to last at least 15 years, according to the International Peace Institute. Higher levels of women in parliament reduce the risks of civil war.

Here’s an example. The Global Fund for Women gave a $10,000 grant to Leymah Gbowee and her organization Women in Peace Network in Liberia in 2001. At the time Liberia was in the middle of a bloody civil war that raged for 14 years.

Women in Peace used the grant money—and risked their lives—to bus hundreds of women into Accra, Ghana, where they staged a sit-in for peace at a hotel where political talks were under way. They established an interreligious movement of Christians and Muslims bringing women’s political power to the door— literally—of the high-level negotiations. The women linked arms and blocked the meeting doors where peace talks had stalled, refusing to leave until the peace accord was signed and finalized and the civil war was over.

“For her efforts in the non-violent struggle for the safety of women and for women’s rights to full participation in peacebuilding work,” Leymah Gbowee was one of three women awarded the 2011 Nobel Peace Prize. She said that it would have been “impossible for us to achieve what we achieved in Liberia had it not been for the fact that we had support both financially and morally” by a small grant from the Global Fund for Women. That seed investment yielded incredible returns in brokering peace for a whole country.

Let’s take another pressing issue: the climate crisis. Women farmers account for up to 70 per cent of all food production in developing countries and are at the forefront of climate resilience efforts. According to the United Nations, women are leading efforts to conserve and care for forests, helping to mitigate the carbon dioxide emissions caused by deforestation. The fight against climate disruption and for the survival of all on our planet, like so many other battles for progress—healthy societies and robust economies—intersects with the rights of women.

It is because women are so perversely underfunded that the investment in their full participation in society has enormous yields. Despite some recent headline-commanding investments in gender equality funding from Canada, the EU, and others, women’s rights are woefully underfunded comparative to the need. (https://matchinternational.org/equality-fund/)

Further and problematically, only one percent of genderfocused aid goes to women’s organizations. In this case, it’s not just what we fund, but how we fund it.

Giving money to large institutions (in which men dominate in leadership positions) to decide how to best benefit women is not a model for true change. Conversely, funding women directly to lead the change they seek—not targeting them as beneficiaries—begins to unwind the power dynamics that disadvantage women in the first place.

To end poverty, reduce conflict, promote global health, and decrease climate disruption—invest in women throughout the world now, and invest in them directly. It is the best way to get the world we want—a world where we all have more equal access to opportunities benefits everyone. We should all start working toward that goal today. We don’t have any more time to spare.

Peter Schattner has worked in a range of scientific fields from molecular biology to theoretical physics. Author of Sex, Love and DNA: What Molecular Biology Teaches Us About Being Human, he encourages men to join him in supporting women’s rights through the Men’s Challenge, which matches donations to the Global Fund for Women (https: globalfundforwomen.org/challenge). This commentary first appeared in Alliance Magazine. 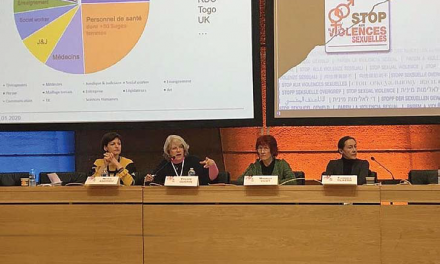