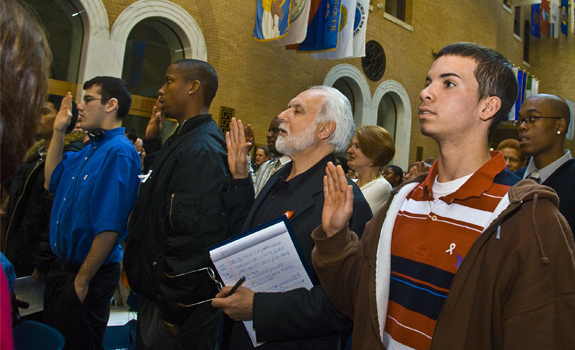 TAKING THE PLEDGE: Men participating in White Ribbon Day pledge “to be part of the solution in ending violence against women.” The commemoration is held each March at the Massachusetts statehouse in Boston. VOICE MALE editor Rob Okun is in the center (with notepad).

WHAT ABOUT THE MEN WHO ARE TRYING TO DO THE RIGHT THING?

That was the thought I had the other day after hearing what was intended as an innocuous joke. “If you took a vote on which is the better gender,” a female friend said, “men would come in second.”

The wry smile that crossed my face quickly faded. Society is so often poised to castigate men that even those working to transform manhood and old school, conventional masculine culture are mostly invisible.

A gathering at the Massachusetts statehouse in Boston on March 7th sought to change that.

As they have for the past five years, several hundred men—“peace ambassadors” from across Massachusetts—gathered for a public event highlighting men’s commitment to preventing violence against women.

As part of Massachusetts White Ribbon Day, those who came together were advocates for a world where all men, older and younger, men are part of the work of ending sexual abuse and domestic violence. Speakers representing a range of masculinities shared a common message: men have a role to play in preventing violence against women.

The White Ribbon campaign began in Canada in response to the Dec. 6, 1989, mass murder at l’École Polytechnique in Montréal. A man stormed into the college, murdered 14 women and then shot himself.  Commemorated as Canada’s National Day of Remembrance and Action on Violence Against Women, in the past 23 years it has grown into an international campaign with activities at various times of the year in dozens of countries around the world.

The gathering is both a commemoration and a call to men to redouble our efforts in addressing the domestic and sexual violence crisis plaguing society.

The Baystate campaign is coordinated by Jane Doe, Inc., the Massachusetts coalition against sexual assault and domestic violence whose members include domestic violence organizations and rape crisis centers across the Commonwealth.

Male ambassadors are a key part of Jane Doe’s strategy to encourage more men to work to prevent violence against women.

“The vast majority of men want to do the right thing, to speak up and speak out against the minority of men who perpetrate violence,” said Craig Norberg-Bohm, who coordinates Jane Doe’s men’s initiative. “As men wake up to the injustice that women face, they become enthusiastic about becoming involved.”

Norberg-Bohm said they chose International Women’s Day because it is a particularly good time for men to recognize a missing component in the violence equation society is trying to solve.

On one side are well-meaning men like White Ribbon Day ambassadors; on the other are men acting abusively. In between, and missing from the equation, are bystanders; the overwhelming majority of men who are neither peace ambassadors nor agents of violence.

They hold the answer to what kind of manhood society will embrace.

If they stand silently by, the abusers will mistakenly believe they are condoning their violence, and the ambassadors of peace will think they don’t care.

The truth is, all men need to recognize that violence against women—whether a domestic violence murder in New York or a gang rape in New Delhi—is not a women’s issue but a community issue. It is high time for bystanders to leave the sidelines and take a stand so their sons won’t have to ask, “Dad, what are you waiting for?”

At the Boston statehouse all the men in the room, including high school and college students, stood to recite the White Ribbon pledge promising “to be part of the solution in ending violence against women.”

The pledge is a starting point—a spark for discussions in service clubs, houses of worship, classrooms and locker rooms. Positive actions will hopefully spring from those conversations in such forms as school campaigns promoting respect and faith communities inviting anti-violence speakers to the Sabbath pulpit.

White Ribbon Day commemorations remind us of the efforts some men are making to reshape masculinity. Still, we cannot wish away the damaging impact of conventional expressions of masculinity; that too many men exert power and control over others, often the women in their lives, as a way to mask their insecurity with life’s challenges.

As more men question what it means to be a man, it’s a good opportunity to also consider what they wish for their sons, grandsons and brothers. Are we nearing the day when we define manhood by a male’s capacity to be compassionate and nurturing as well as strong and decisive? I hope so.

Voice Male editor Rob Okun can be reached at rob@voicemalemagazine.org 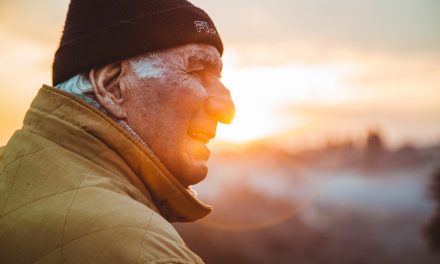