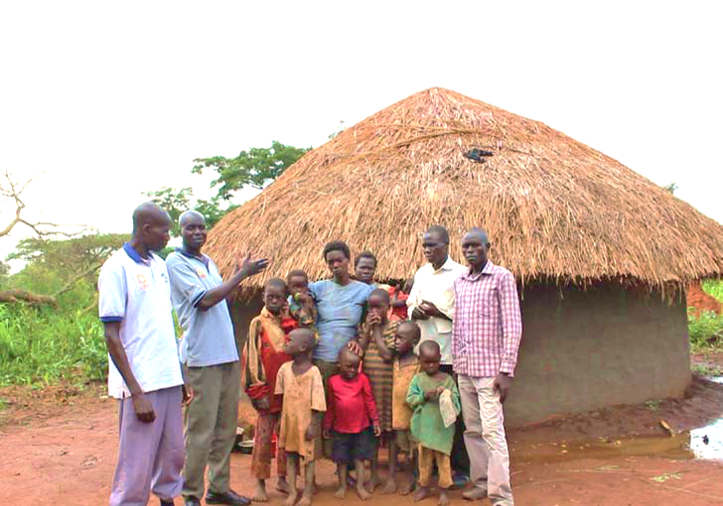 Ojok Mark, 31 years old, spent his early life in a displaced persons camp in the Gulu District of Uganda. With limited mobility and scant opportunity to work, he and other young men resorted to drinking. To compound matters, he got a woman pregnant and started a family while young. When he started his family, he thought that they “belonged” to him; that his wife should do everything for him. After harvesting their crops, he would sell them without telling his wife and spend the money drinking and buying gifts for another woman. “I had all the power to sell anything in the house whenever I wanted, without even asking anyone,” Ojok admits.

“I used to think that sending children to school was a waste of resources,” he says. Family planning was something he never wanted to hear about. “Each time my wife would talk about going for family planning services, I would just be rude and cruel to her.” He threatened to leave her if she continued to bring the topic up. At the time he was drinking heavily, and the family was living in poverty.

One day, a man named Oloya Ben asked Ojok to attend a meeting. “I agreed quickly because I knew they were going to give us a little money after the meeting which I could use to buy alcohol… When I reached the place, I found some men calling themselves Coo Makwiri (Role Model Men), talking about gender based violence, alcohol, etc. They said that it is important for men to accompany their wives to the health center. I left when I realized they weren’t going to give us any money…”

Oloya Ben, who had invited him to the meeting, followed up, asking Ojok to go to another meeting, but Ojok refused. He asked again and again Ojok refused. The man was persistent and Ojok finally agreed. The Role Model Man talked about family planning, alcohol and its effects, gender-based violence and parenting. Hesitant about his wife using family planning methods, after several conversations with Oloya Ben he agreed to go to the health center with his wife for family planning.

“The hardest thing was the alcohol: it took me time to start reducing my level of drinking. It wasn’t easy at first to tell my friends that I drank with, and most times, I would find myself going back to them. But with the effort put out by Oloya Ben, I slowly left the drinking group and even the other woman that I was dating.” He started regularly going with his wife to the health center for family planning. “We agreed together when to have our next child… my children are healthy and have completed their immunizations… My wife has time to participate in other community activities with other women. I am able to pay school fees for my children, provide for their basic needs.”

Ojok is a changed man. He can discuss plans for the family with his wife and they jointly decide how to make the best use of the crops they harvested and the income they earn from selling them. His wife is very proud of him now, and she has testified to other women how her life has changed and how she is enjoying her home because of how Role Model Men helped her husband and saved their marriage. @@@

Engaging Men and Boys in Uganda

Ojok is a beneficiary of the work of CARE International, the global confederation of 14 members working together to fight poverty in 94 countries. CARE sees gender equality as fundamental to achieving social justice and reducing poverty. It is the area in which the organization sees the most pressing need for social change. CARE’s experience in Northern Uganda demonstrates that achieving real and lasting progress toward gender equality requires proactive work with men and boys alongside work with women and girls.

Working with Men as Clients

CARE Uganda recognizes that men are also suffering from psychosocial distress and gender inequality. Conforming to the image of the “ideal man” according to Ugandan gender norms—e.g. being the sole decision-maker and provider in the household, dealing with peer pressure to drink and dominate women, and coping with insecurity or trauma without showing any sign of vulnerability or accepting any help—results in a lot of stress for men. In addition, men who do not conform to gender norms experience discrimination and violence themselves. Men are socialized to not acknowledge pain and to believe that talking about personal problems is a sign of weakness. As a result, men who experience violence rarely discuss their problems with others, contributing to depression and even suicide.

Targeted men can benefit from various psychosocial support services. At one level, men in dialogue groups often engage in peer-to-peer support, encouraging one another to open up and share personal problems. At another level, some men have social support needs that require referral to external social support mechanisms—which may be facilitated by the Role Model Men or their supervisors.

CARE found that initially Role Model Men found it difficult to implement gender equality work. Men feared negative reactions from family, peers and others in society. Many fears were true. Some wives were unsupportive and suspicious. Within the community, there were fears that Role Model Men wanted to erase the local culture or that they intended to make other men’s wives fall in love with them. Others felt jealous of the men’s improved livelihoods. Role Model Men also shared that some local leaders felt threatened by the work, fearing that they would lose their income through settling quarrels or gender-based violence cases, or not wanting existing cultural practices to be changed.

Positive changes eventually started to take place. Wives better understood their husbands, appreciated their support, and became proud of them. Many Role Model Men saw improvements in their family relationships and livelihoods. As a result, some community members now come to them for advice; community appreciation is growing, as is cooperation with local leaders.

“Before he became a Role Model Man, he used to come home very late,” says Akello Doreen, a wife of a Role Model Man, “but nowadays he comes home early. Every evening he sets a camp fire and has the children sit around it as he tells them stories and teaches them how to live a better life.”

“People look at me and think, ‘It is never too late to change.’ Just a couple of years ago I was an unpredictable, violent drunk, feared by my wife and children. Looking back, I think much of my frustration came from having been a child soldier. I have seen and done things that can never be forgiven. One day, after a fight with a neighbor, I realized that my life was a mess and I decided to change. When CARE’s Role Model Men program started, I was chosen because of my background and ability to change. I was trained in understanding the effects of gender-based violence, ways of preventing it and looking at sexual and reproductive health. My life has improved and I am very grateful for that. My family is thriving and my story has been an inspiration for the entire community. People come here for advice. I counsel couples in family life and planning and I always try to set a good example.”

Ojok Robert, 41, says, “I would wake up early in the morning and go to the drinking joints. I used to sell most of our food to drink and I never listened to my wife. When I went [to another town] to work in a sugarcane plantation, I continued beating my wife and I would even fight with my neighbors.

“One day, I met a Role Model Man. He advised me to reduce my level of drinking and to stop beating my wife. He started visiting me regularly and at times he would come with other Role Model Men. He continued advising me. After interacting with him and other Role Model Men several times, I started to reflect and realize that what I was doing was very wrong. I started reducing the amount I was drinking. It was tough… I also started to learn to stop using violence. I learned how to deal with anger differently, to identify when it was coming up and take it out in different ways. After some time, I stopped drinking completely and got saved. I became closer to my wife and we started planting tomatoes together on a large scale… Right now we are so happy because we plan for our family together, there is understanding between us. I respect her now. Deep in her heart, however [I wonder], will she ever really forgive me?”

To Be a Man