I was running. The Arts Against Abuse event was going smoothly. The messaging was strong, the crowd engaged and activated by the cause and there was the right mixture of indignation and determination for change in both performers and those attending.

While the majority of high-profile silence breakers—and the #MeToo movement in general—has had a largely Western focus, its effects have reached every continent. For a small country, Swaziland carries the weight of some big statistics. HIV and TB prevalence remain the world’s highest per capita, levels of intimate partner violence, including sexual violence, are alarmingly high and economic instability continually threatens family structures and livelihoods. 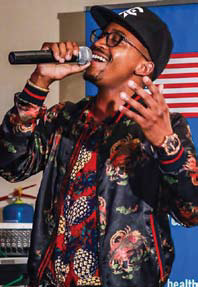 Popular Swazi artist Sands is a strong supporter of the Arts Against Abuse campaign.

In response, Kwakha Indvodza (Building a Man), with support from the U.S. Embassy in Swaziland, unwaveringly challenges genderbased violence, especially sexual violence against women and girls. Since 2015, Kwakha Indvodza and the U.S. Embassy have hosted an annual Arts Against Abuse campaign, using the arts to provide young people a platform with which to engage in issues of gender inequality and violence against women and girls. Last year’s four-month campaign included campus events at Swaziland’s tertiary institutions, a public Walk a Mile in Her Shoes march and, as has become tradition, a mixedarts exhibition.

I was running—almost absent-mindedly— to the advocate or artist onstage, thinking about what happens next, about the lighting, sound, audience reaction, not about the speaker. So I was caught unawares, blindsided by the enormity, pervasiveness and global nature of men’s abuse of power over women. The Hon. Lisa Peterson, U.S. ambassador to Swaziland, stood on stage about to give what I thought would be a politicized vote of thanks. Instead, she said:

As Swazi activists and citizens fight against gender-based violence, I think it is important to note that the United States is going through its own significant moment of calling out gender-based violence and sexual harassment. Developments in the U.S. prompted Time magazine to name as its 2017 Person of the Year ‘The Silence Breakers,’ the women who stepped forward to shed light on sexual harassment and abuse.

“People may hear of these experiences and say to themselves that these acts are really not so bad because I was not physically injured, raped, or even killed—all of which are outcomes routinely reported in the Swazi press. The problem is that actions such as flashing or groping grow out of, and reinforce, notions that women do not require the same degree of respect as men and that a woman’s body is there for anyone to enjoy, in any manner they wish—regardless of the wishes of the woman herself. 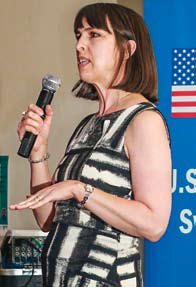 “These smaller acts create the environment for the larger headline-grabbers of physical abuse, rape, and murder to occur. And they are all rooted in a fundamentally unequal status for women…”

My staff and I, seasoned advocates whose skins are thick from regularly hearing such horror stories, stopped cold. It was not so much what was said, but who had said it —the U.S. ambassador. In her story, as elsewhere in media, politics and business, there is now a head-on confrontation with the visible and invisible power structures that allow men to dominate and abuse and promote a belief that women should accept domination and abuse. It is no different in southern Africa than in North America.

We need to contextualize the act of speaking against predatory behavior into our particular, already burdened part of the world. We need to do this not only to prevent the view that #MeToo is a Western phenomenon, but also to prevent its global stagnation, to avoid the inevitable patriarchal backlash which is already beginning. But most of all, we need our own #MeToo movement to reject the view that this simply is our reality. Abuse and violence have become so normalized in the region that many believe it is an expectation rather than the inexcusable exception. We desperately need to strengthen legislation that protects women and girls from sexual violence and harassment.

We need our own southern African #MeToo revolution. Now.

Tom Churchyard is founder and executive director of Kwakha Indvodza (Building a Man). He can be contacted at tom [at] kwakhaindvodza.com. 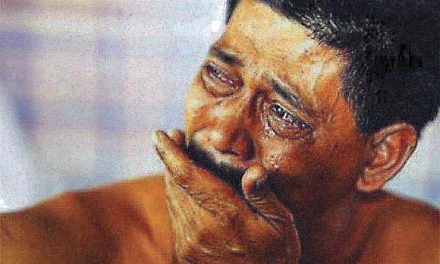