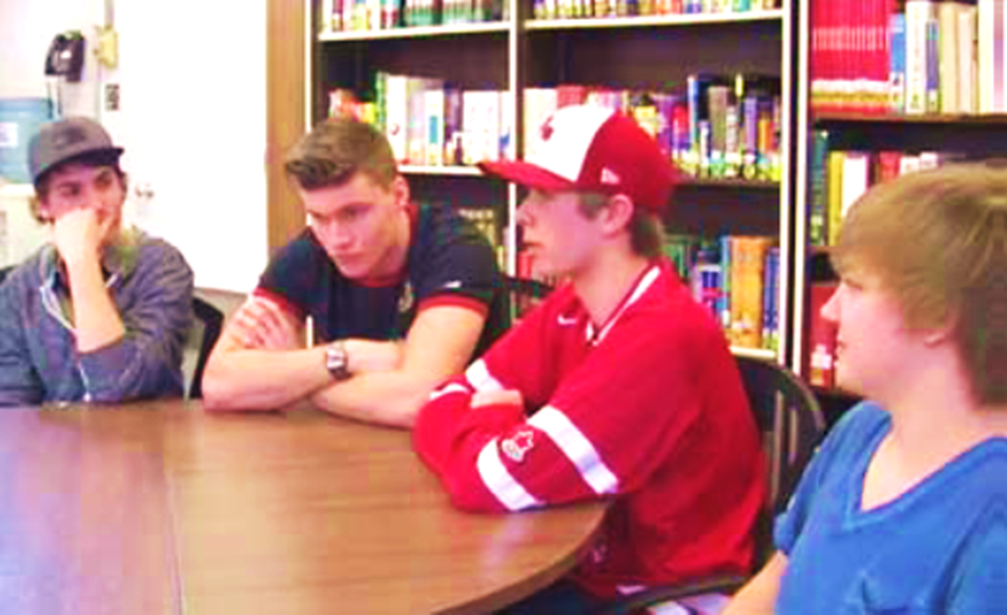 Every Thursday at Georges P. Vanier Junior High School, a dozen adolescent boys assemble in an unused classroom. They gather around a large table, doing their best to ignore the girl power posters and sparkles that cover the walls. After all, they’re there to talk about what it means to be a man.

Middle school health classes usually have a segment on sex education, which for most adults conjures awkward memories of studying the female anatomy and putting a condom on a banana. Wise-Guyz, a nonprofit based in Calgary, Alberta, is working to broaden what “sex ed” can teach youth — specifically, boys between the ages of 13 and 15. Their participants instead talk about weighty issues like masculinity and the hypersexualized portrayal of women in media.

When these teens first gathered in October 2014, there was a lot of nervous laughter. Comments and questions were sometimes couched in bravado or sarcasm. Program creator Blake Spence used the first few weeks, as he does each year, for the boys to get to know each other and, in his words, “create a safe space.” Before long, the giggling gave way to critical discussion.

“We laugh with each other and we’re always joking around about stuff,” said Will, a current participant. “But when things need to be serious, they’re serious. We have a little rule: What happens in Wise- Guyz stays in WiseGuyz — so whatever happens in there, we always have to keep it to ourselves.”

WiseGuyz is built on four modules, which take from October to May to complete. Instead of focusing only on the physical basics of sex, participants talk about human rights, sexual health, gender, and healthy relationships. Within those broad topics is plenty of conversation around pornography, consent, homophobia, sexual violence, and emotional abuse.

WiseGuyz is part of a nascent trend toward programs that go beyond physiology to often overlooked issues, like how to have a healthy relationship and how culture shapes our ideas around sex. It was developed five years ago, when staff at the Calgary Sexual Health Centre noticed that the rate of teen pregnancies was going down but sexually transmitted infections (STIs) among teen boys were rising.

Boys, research revealed, were more likely to engage in high-risk behavior and less likely to protect themselves.

The center enlisted Blake Spence to create a program for boys to address this. Spence was already the Centre’s community education coordinator and he’d also worked there in its peer education program.

But perhaps most important, he’d been a 14-year-old boy — confused, eager for information, and wishing he’d had a mentor-type program. Discussions on sex education are polarized on both sides of the 49th parallel that divides Canada from the United States. Nicole Cushman, executive director with Answer, a New Jersey–based nonprofit that trains school- and community-based sex educators (answer.rutgers.edu/), said that the vast majority of people in the U.S. are generally supportive of sex education. “All the public polling done on this topic shows time and time again that large majorities — whether we poll parents, or teens, or voters — really do think it’s important that sex education is taught,” she said. “And they believe that it should cover a wide range of topics.”

Prior to 2010, however, federal funding in the U.S. was available just to abstinenceonly programs, said Leslie Kantor, a vice president at Planned Parenthood Federation of America. In 2010, the Obama administration announced a shift to evidencebased approaches to pregnancy prevention, which reduced the funding for abstinence-only programs.

The result, said Cushman, is “a patchwork of [sex ed] policies and programs across the country.” Right now, she said, 22 states and Washington, D.C., mandate sex education. Only 13 of those actually require that the curriculum be medically accurate. Quite a few states have no sex education policy whatsoever.

No U.S. sex ed program takes the expansive view that Wise-Guyz promotes. Nicole Haberland, a senior associate with Population Council, has been studying sex education programs around the world. The value of a program like WiseGuyz, Haberland believes, is its adherence to examining gender and power. “While a number of other sectors have come to realize the importance of gender norms and power in relationships, the sex ed field has been slower in North America to come to it and acknowledge it,” she said.

Part of the problem is that, while it’s relatively easy to track the hard data — reduced teen pregnancies, fewer STIs, delayed initiation of sex — it’s more difficult to track the consequences of softer skills such as communicating better and accepting people who are different. “Most of the indicators that have been used to measure effectiveness [of sex ed programs] don’t really look at the context of the relationship,” said Haberland. “Women in relationships of unequal power are more likely to have STIs and HIV, and more likely to be experiencing intimate partner violence.” In other words, addressing gender inequality will likely affect sexual health.

Each 90-minute session at WiseGuyz opens with what Spence calls “check-in,” which is a chance for the boys to talk about themselves and what’s going on. Check-in, said Spence, “can take a long time. Some of them really take advantage of that time to talk about some of the issues or the struggles they’re having.”

The safe space that Spence cultivates is crucial to the program’s success. Haberland offered the following criteria for productive sessions: “Answering difficult questions, making sure your classroom is a safe space for LGTBQ teens so that they don’t feel harassed or bullied, and ensuring that the curriculum feels relevant to their needs.”

Also essential is a high-quality facilitator. The best ones, said Spence, are able to connect with participants and talk about touchy subjects without prejudgment or moral expectation.

For instance, a boy in WiseGuyz recently brought up his same-sex curiosity. “That’s huge,” said Spence. “These are 14- or 15-year-old Voices of Youth boys and none of them have ever talked about that before. To have someone feel safe enough…is a big deal.”

Martin Poirier, a former principal at Georges P. Vanier Junior High, credits the program for making the school a safer place. “We were one of the first [junior high] schools in Alberta to have a Gay-Straight Alliance,” he said. “We could do that because kids could be respectful — and that’s a direct impact of WiseGuyz.

They were educated to have that respect for diversity.” He pointed to another incident a few years ago when a girl had “racy” photographs being distributed via social media. “One of the kids in WiseGuyz brought it to our attention so we could intervene and stop the cycle,” he said. “The boys said ‘Hey, that’s not right.’ [WiseGuyz] changed the culture at the school.”

When Will now hears his friends use sexist or homophobic slurs, he routinely calls them out. “It’s kind of a cool way to, you know, clean up our school,” he said. For Will, that meant cleaning up his own act first. He confessed that he was a “casual homophobe” before the module where they learned about homosexuality and the power of language. “That was a big subject,” he says.

“Talking about using the word ‘gay’ and casually making fun of it.” Now, he would never use that word. “I watch myself,” he said. “And with guys in my group, we’ve all stopped.”

Kier, a former participant now in grade 11, said that module had a big impact on him too. “When I went in, I would use the word ‘gay’ as a joke,” he said. “But I don’t do that anymore after hearing what Blake had to talk about…. It has helped me to be more accepting.”

To Spence, these outcomes are standard. “We tell them that it might not directly impact you if people talk in sexist, homophobic, or transphobic ways,” said Spence. “But [by virtue of being young men], you have an opportunity to shift those conversations.”

WiseGuyz has made efforts to track its impact. Since its inception in 2010, 370 boys have participated in the program. A recent 12-page analysis notes that “the program has had a significant positive influence on teen boys’ perceptions, attitudes, and beliefs with respect to sexual health, masculinity, and homosexuality.”

But perhaps more persuasive than the self-collected data is the fact that the program has grown from three to six schools in Calgary. Plans are under way to move it into high schools next fall — with WiseGuyz alumni at the helm. Spence routinely fields requests to export his program to the United States, and more recently to South Africa. “Ideally we’d love to be able to scale and take our model and spread it…everywhere,” he said. Funds for the time-intensive program, however, are limited.

He’s also aware that the success of WiseGuyz relies heavily on the leader, and that training leaders can be a lengthy process. “It’s who’s facilitating the curriculum and what their lens is and how they connect with their participants and how do they create that safe space,” he said, “because that’s what needs to happen for the curriculum to resonate and have an impact.”

Even if the WiseGuyz organization grows at a slow pace, its fundamental approach is rapidly scaling. “There are some terrific programs in the United States coming down the pike that are referred to as gender transformative programs, or at least gender aware programs,” said Kantor of Planned Parenthood. Spence agreed. “There’s a shift happening and it’s exciting to know that my team is not working alone, that other people are engaging in this work.” Programming about healthy relationships, communication skills, body image, self-esteem, gender, and culture should not be controversial, said Cushman of Answer.

“There’s a lot of misperception… that it’s more of a lightning rod issue than it really is,” she said. “These are universal values.” It’s a lesson that Will has taken to heart. “I’ve been in a relationship before and it didn’t last long because I guess I was disrespectful. I think that before [WiseGuyz] I was definitely very sexist. And now, you know, I view women as people and not, like, objects.”

Leslie Garrett is an author and journalist who has also written for O, The Oprah Magazine, CS Monitor, The Globe & Mail, and Salon among other publications. She is also author of The Virtuous Consumer. A version of this article originally appeared in Bright (https://medium.com/bright/sex-ed-thatturns-boys-into-men-ede65ca6e263). To read more work like this, visit their site. 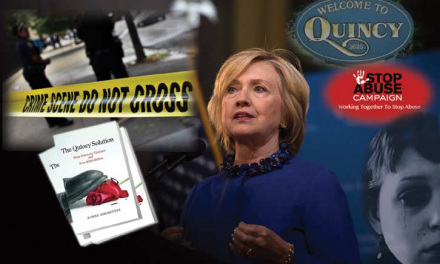