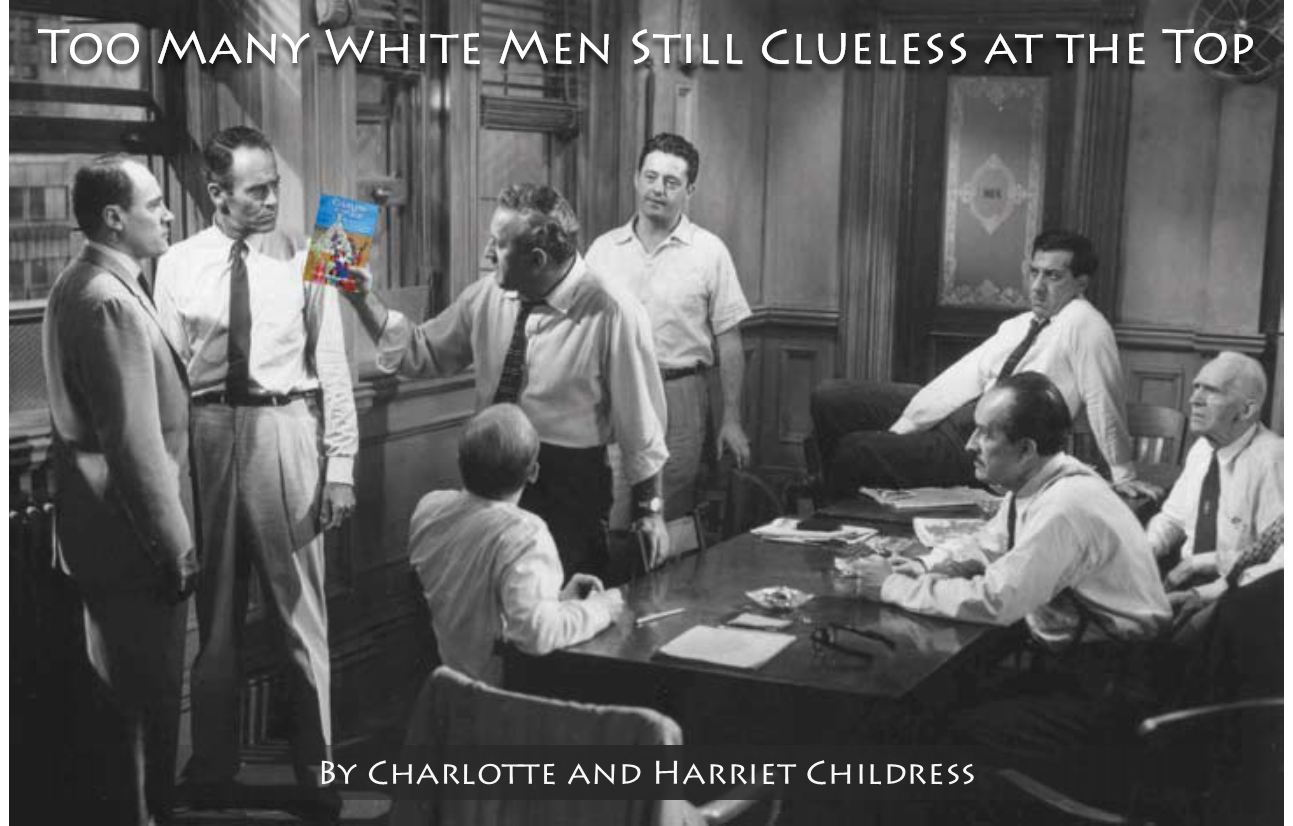 We recently collected signatures outside our local public library for a ballot initiative supporting samesex marriage. Of the hundreds of people we talked to, most were supportive, or at the least polite. There were, however, about a dozen people who argued with us or condemned us—and every dissenter was a tall white male, older than 50, with no recognizable disability.

While the majority of white males have rejected traditional top-of-a-hierarchy roles, when we look at the leadership of those who are stuck, most likely we find a white male. White male privilege is a universal concept that most people now understand.

Political cartoonists consistently use images of tall white men when they want to convey a character who is perched on top—a politician, Wall Street executive, abusive boss, homophobe, sexual harasser, etc. We affectionately say this particular breed of white males is afflicted with PMS, a condition of being Pale, Male, and Stale.

For centuries, white males have had the responsibility to hold up our traditional system of hierarchies, and have provided groups other than white males clear reasons to band together and push for equality. But now, this white male role is becoming obsolete. With the success of weakening the sexual orientation hierarchy, the country is well on its way to achieving significant rights for every major group in the country. There is now a critical mass of people who realize that those who insist on remaining clueless at the top are not capable of leading the nation.

We still, however, need white males with PMS. They have a vital role to play at this point in the country’s progression. Their job is to showcase the problems with top-of-thehierarchy attitudes and behaviors in ways that are too obvious to overlook. The role of people who want equality is to make sure that these white males perform their job.

Mahatma Gandhi and Martin Luther King, Jr., showed that given enough rope, people who are vehement about holding on to outdated support of injustice will expose themselves in unacceptable ways.

Reverend Fred L. Shuttlesworth, civil rights leader in Birmingham, pushed against segregationist and police ommissioner Bull Connor for years. Shuttlesworth sensed that Connor’s harsh attitudes would become his downfall, and predicted that when the civil rights movement had gained a critical amount of support, Connor would do something significant to further the cause of equality. Connor did not disappoint. He ordered Birmingham police officers and firemen to use dogs and high-pressure water hoses against demonstrators. Images of the resulting mayhem appeared on television and in newspapers throughout the country and helped to shift public opinion in favor of national civil rights legislation.

We do not have to create political movements the size of those led by Gandhi and King to get hierarchy builders to act out. The strategy works on a smaller scale.

Unlike others who have been scrutinized their entire lives, white males are not used to being singled out and discussed as members of a group. Those who are clinging tightly to old ways predictably protest and resort to classic control tactics when anyone tries to hold them accountable. These consistent responses—such as blaming, name-calling, intimidation, rhetoric, and threats—create opportunities to showcase attitudes that are unacceptable to others. We published an op-ed in the March 31, 2013, edition of the Washington Post that suggested that the nation hold white males accountable for their contributions to gun violence (see Summer 2013 issue). We used hierarchy theory—role reversals, language patterning, and attribute mapping—that expose people who are building hierarchies.

The article ignited a nationwide firestorm. The op-ed went online the Friday night before publication, and by noon the next morning, the comment counter had already maxed out at 5,000. Comments continued to be posted every few seconds for days. We were the subject of Rush Limbaugh’s “Morning Diatribe,” a Fox News report, and were covered on more than 300 websites. Our op-ed pushed against thousands of incredulous white males who countered with attacks. The attacks were so vicious a Washington Post editor wrote a follow-up editorial describing them as vile, racist, and sexist. Many other commenters found these white males to be grossly inappropriate, said their responses proved the points in our oped were correct, and observed that the rants consistently avoided addressing the issues presented in the article.

After the Wall Street Journal misled readers by reporting that our research on hierarchies was funded by the National Science Foundation (NSF), TeaParty.org urged followers both to launch an email campaign and to protest in person at NSF headquarters. If they did demonstrate, imagine how ridiculous those Tea Partiers must have looked to NSF officials since the agency never funded our work.

Back Them into a Corner

A second technique creates a situation that leaves those on the top no other option than to either back out or expose their true motives—a move very likely to prove unpopular. The strategy is to go along with their stated rhetoric, but then substitute a scenario based on the assumption that the top is really promoting fairness. This step disallows any power or privilege those on top assume to be theirs. If they are indeed promoting hierarchies, they cannot disagree with the substitution without exposing an offensive position. Let us explain.

Creationists, for example, want their biblical creation story to be taught alongside evolution. They use a claim of fairness and inclusion to try to garner support, but the possibility exists that there are those among their ranks trying to build a hierarchy which outs their own religion on top. If creationists support the inclusion of
all creation stories equally, then their claim of “alternative explanations” is correct. If they accept only the Christian story, then the creationists are using strategies typical of people who build hierarchies: people at
the top assume everyone wants and needs to be like them, and true intentions hide behind rhetoric and rationalizations. When a biology instructor at a local college wanted to include creationism in
curriculum materials, we used hierarchy theory to expose his motives. Instead of objecting frontally, Harriet sent an email to fellow faculty suggesting that they also include the creation stories of local indigenous
groups. Another faculty member who is Native emailed the group that he could provide the creation stories of many regional tribes. That was the end of discussion, and creationism was never mentioned again. 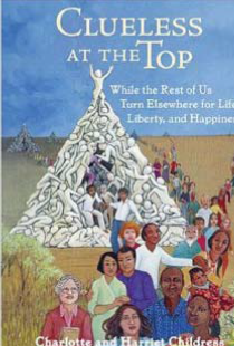 Hierarchies vs. Fairness and Equality

A third strategy is to keep the conversation on the frame of “Hierarchies Versus Fairness and Equality.” Discussions of individual issues, differences of opinion, or moral arguments can quickly sidetrack the conversation into conservative rhetoric. By keeping the subject on hierarchies, people who care about equality and fairness create a powerful advantage because hierarchies are easiest to see and understand when viewed from the bottom. So-called “lower” people (and those who listen to them and understand hierarchies) know they have to adjust to decisions and policies that are not designed with their desires, perspectives, and needs in mind.

On the other hand, people with PMS symptoms do not “see” hierarchies because they were born into and/or continue to emulate higher groups who make rules that reflect the desires, perspectives, and needs of those on top. They have little incentive to question the system they create. This blind spot produces opinions and actions that appear to others as clueless, insensitive, out-of-date, and cruel.

Anyone can choose to ignore inequality, but, as we observed at our local library, the most likely are those who have lived their lives on the top of major hierarchies in the United States—people who are white, male, wealthy, heterosexual, able-bodied, tall, Christian, and speak “standard” English. After our Washington Post article was printed, we were invited to appear as guests on a talk show hosted by a conservative white male. To avoid the confrontation and labeling that sometimes go with such talk show hosts, we uggested—and he agreed ahead of time—that we would discuss hierarchies, our area of expertise.

Right out of the blocks, the host asked a baiting question that followed along the lines of the negative accusations we’d been hearing all week. As we kept on our frame of hierarchies, we found it was easy to elicit some revealing comments from the host: “How can you say that white males are on the top of the country’s hierarchies when we have Barack Obama as president?” And, “We have had Obama as president, and Hillary Clinton and Condoleezza Rice as secretary of state, so this proves that there are no more hierarchies anywhere in the United States.”
We can imagine that, upon reflection, the host would not want the 99% to hear what he blurted out, that hierarchies are extinct. In fact, he took the interview off his website by the end of the day.

The founders of the United States offered the new nation a noble vision, but they also handed down a powerful challenge—a legacy of prominent leaders who are programmed and rewarded to build and maintain hierarchies.
Now that a critical mass is wise to them, these leaders are in for a surprise. When they expose themselves, everyone else will recognize their smoke screens, puffery,doublespeak, and rhetoric for what it is.

Charlotte and Harriet Childress are researchers and consultants on social and political issues. They are the coauthors of Clueless at the Top: While the Rest of Us Turn Elsewhere for Life, Liberty, and Happiness, on outdated hierarchies in American culture. To learn more, go to http://www.cluelessatthetop.com/.