It happened when I was a brunette, but it seems to happen more now that I am a blonde, even though I am blonde only because I’m older — brown hair is hard to maintain after a certain age. Being older should be a protection against this thing, this condition, yet it isn’t. In fact, it seems to be getting worse all the time. I go to the ballpark, wearing a sensible hat to protect my face from the sun. A beer vendor pokes me in the back and then pokes the brim of the hat: “That’s a Preakness hat,” he instructs me, as if I have violated some sacred code of behavior. I post a declarative status on Facebook and a man presumes I am asking for his advice, despite the lack of a question mark. I attend a booksigning after an 18-hour day, in which I have arisen at 5 a.m. to catch a flight and done three different events. When I return to my hotel room, I find a plaintive e-mail from someone who attended the evening talk: “Do you know you don’t look like your author photo? Do you think that’s fair?” 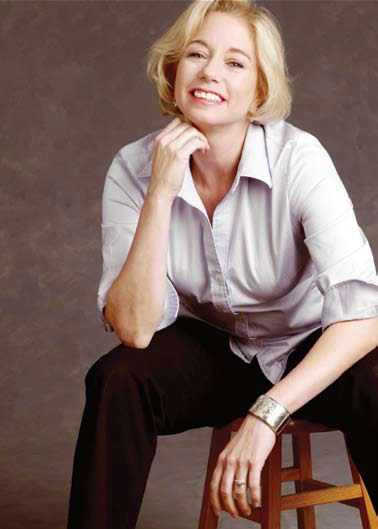 There were only eight people at the signing and I’m pretty sure I know who my correspondent is — and that he didn’t buy one of my books. Is that fair?

Ah, but there I go again. I am the guilty one. Guilty of being Female in Public. My body, my behavior, my posture, my words — they belong to others, who will judge whether they are suitable or not.

I first noticed this phenomenon when I was 39 (still brunette) and unburdening myself in a restaurant to a dear friend who happens to be a man. I guess, from afar, we appeared to be a couple. Toward the end of the meal, an older man walked over and handed my friend a note, then scuttled away. It said something like this: “The average woman speaks 40,000 words a day, the average man only 4,000.” I am unsure of the ratio or the exact numbers, but one was really big and the other was relatively small. I wanted to run after the man and use up a few more of my apportioned words. But such encounters almost always leave me in mode d’escalier, mouth gaping like a fish to the extent that another man will inevitably say: “Hey, close your mouth.”

Once, just once, I had a rejoinder. A man interrupted my writing at a local coffee house to ask how my “little book” was doing. (The same man also recommended a book on menopause to me despite the fact that it was not something I yet required.) Now, as it happens, I have written 20 books, and this particular little book, my twelfth, was the first to hit the New York Times bestseller list. So I told him that.

“Don’t break your arm patting yourself on your back,” his friend said to me.

I have thought a lot — a lot — about why men of my father’s age harbor this strong need to correct/scold/instruct me. It does not feel paternalistic to me, not in the least bit, despite the usual age gap of 30 years or so. It feels hostile, like the first scene in some really bad rom-com. We are meeting cute, I guess, but not being in need of rom and capable of supplying my own com, I am not on board for the rest of the story.

I try to see myself as these men see me, this strange woman so in need of correction/scolding/instruction. I am tall, broad-shouldered, and seemingly confident. I have biceps significant enough that a male colleague once jokingly suggested that it would be a kindness to the men on our writing workshop faculty if I stopped wearing sleeveless tops in the group photos. If you are an 85-year-old widower, I am, in my humble estimation, like a trophy wife. And by trophy wife, I mean I look like someone who can lift you on and off the toilet, should it come to that. Except I am not available for toilet duty and perhaps they discern that? My heart belongs to one man. Only he will have the pleasure of my biceps into old age, although, given that he is a little younger than I am, I probably won’t be much use to him by then.

Of course, the ultimate moment of being Female in Public comes when a woman, deep in thought, is told by a strange man to smile. (And this happens only to women.) Gentlemen, let’s get this straight. There is no part of my body that belongs to you, not even my facial expression. Stop trying to stake out territory there, whether by legislation or verbal imperative. Plus, it never produces the desired effect.

Ah well, it’s not as bad as being called sir, which happens to me almost as frequently. Once, just once, I stood my ground. “I’m a woman,” I said feebly. “Look at me. I’m a woman.” The man just shrugged. I guess I should be grateful he didn’t advise me to smile.

Laura Lippman is creator of the Tess Monaghan detective series. She teaches writing at Goucher College outside of Baltimore, where she lives and works. This column appeared first in Media.com.