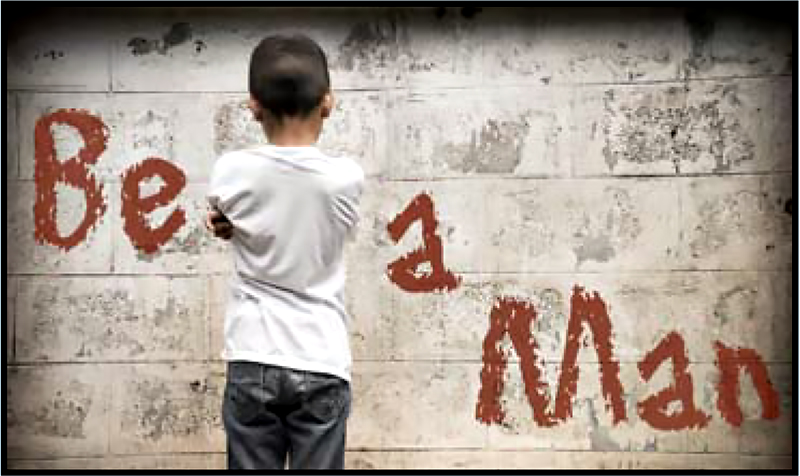 It’s rare that a man makes it through life without being told, at least once, “Be a man.” To Joe Ehrmann, a former NFL defensive lineman, a pastor, and an activist-educator working on the transformation of notions of manhood, those are among the most frightening words a boy can hear. Ehrmann—who played with the Baltimore Colts for much of the 1970s and was a standout lineman at Syracuse University before that—confronted many models of masculinity in his life. But, as with many boys, his first instructor on manhood was his father, who was an amateur boxer. “I think his definition [of manhood]—which was very old in this country—was: ‘Men don’t need. Men don’t want. Men don’t touch. Men don’t feel. If you’re going to be a man in this world, you better learn how to dominate and control people and circumstances.’” Ehrmann grew past those notions, as he describes below.

The three scariest and most confusing words every man hears at some point in his lifetime are “Be a Man!” This cultural mandate carries behavioral demands that include no tears, no emotions, and avoiding—at all cost—acting like a “sissy” or a “mama’s boy.”

These three words—“Be a Man!”—teach boys that to have tender emotions, to share them, show them and name them, are signs of masculine failure. As a culture, we have a biased approach to raising boys, restricting them to a narrowly defined “boys must be boys” mentality. In conditioning young boys to repress the full expression of their humanity, they begin to separate their hearts from their heads, losing touch with their authentic selves, and become trapped in a toxic culture of unhealthy masculinity.

Throughout the course of their development, boys are fed at least three fundamental lies about masculinity. The first lie boys learn by the time they are three or four years old. They learn it on playgrounds, ball fields, and during preschool and kindergarten recess. Boys are taught that their value and worth has something to do with their physical strength and athletic ability. Our culture tends to recognize and reward masculinity according to size, strength, and a mentality that encourages competition, winning, and dominance over other males. The boy who can hit the hanging curve or catch the down and out pass is elevated. Athletic “potential” allows others to see such boys as having more masculine promise. Men who have grown up attempting to define their masculinity by their athletic ability are set up for tremendous failure and frustration in life. Where are boys hearing this fundamental truth: 1) masculinity has nothing to do with athleticism, and 2) being good at sports seldom correlates with the development of character traits that will help them to negotiate life successfully?

By the time they are in junior high boys are indoctrinated into the second lie about masculinity: being a man seems to have a lot to do with sexual conquest. Young, developing boys receive the social message that being a real man means objectifying and/or seducing girls to gratify their physical needs and/or to validate their masculinity. Using other human beings to gratify one’s needs is not the message we want to convey to our sons regarding our daughters.

The third lie imposed on our boys is that masculinity is defined by economic success; as if the measure of a man can come from a job title and a bank account balance rather than from the content of a man’s character. The sad reality in America today is that too many men associate their self-worth with their net worth. We are a society that confuses who people are with what they do and have.

As an activist, I connect these three lies to every social problem we have: boys with guns, girls with babies, violence against girls and women, and immorality in boardrooms. When you see advertisements directed at boys and men, these lies are naturally embedded in the message. Madison Avenue understands that if it can make men feel insecure about their masculinity they can be led to wear certain clothes, drive certain cars, get certain kinds of women—all “possessions” validating the cultural construct of masculinity. Based on these three cultural lies about athleticism, sex and money, who are boys’ role models? (And remember, a role model is someone you model your behavior after.) It’s often the professional athlete. Why? Not because we teach young people to evaluate their character and how they use their fame, but because professional athletes have ability and skill as defined by the distorted concepts of masculinity I’ve described above. They compete against the world and each other—and they win. They have opportunities for sexual conquest and economic success. And their goals are to be the best and to beat out the other guy!

Our challenge is to foster a healthy masculinity that will help guide every young man to understand the truth about what it means to “Be a Man.” We need to help boys become emotionally healthy men while addressing the destructive cultural forces undermining their capacity for well-being and wholeness. And, we need to help men discover their sense of personal responsibility to bring healing and wholeness to wounded masculine souls that will restore the connection of our heads, hearts and spirits.

Joe Ehrmann has been a speaker, author, activist, and coach for more than 35 years, and a player in the National Football League for 10 years. His book, InSideOut Coaching: How Sports Can Transform Lives, explains how to become a transformational coach, changing lives and society by helping to develop healthy men and women. He is also the subject of The New York Times best-selling book Season of Life: A Football Star, a Boy, A Journey to Manhood. He is cofounder, with his wife, Paula, of Coach for America, an organization reframing the social responsibility of sports and coaches. Joe is also cofounder of ShiftWhy, working to redeem interscholastic sports from “winning-at-all-costs” to being education and character based. A tireless activist working to prevent male violence toward women, he is featured in the new documentary film, The Mask You Live In. www. coachforamerica.com.