The Need to Reinvent Father’s Day

In a world where too many fathers and men are angry, hurt, and hurting others, maybe it’s time for a moratorium on conventional Father’s Day gift giving. Maybe some of the millions going to Hallmark and Wal-Mart could be better directed to a fund supporting women’s and children’s safety. 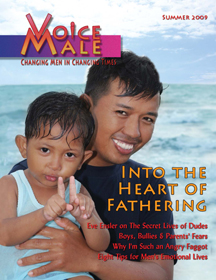 How can we comfortably celebrate Father’s Day in the middle of a domestic violence epidemic? Yes, suffering and celebrating are simultaneous truths in life. But there is an urgency—and opportunity—right now to transform this holiday. Fatherhood has perhaps never been more visible than today, in part because of the current occupant of the White House (and the vice-president, who for many years was a single dad). Let’s seize the moment to transform the day from one of consumerism to one of activism.

Even though it’s a minority of men who perpetrate violence against women, the results are devastating. Think what it could mean if Father’s Day became a time men stepped forward as peacemakers in our families. Grandfathers, sons, brothers, uncles, nephews, cousins, and neighbors could all be involved. There would be plenty of time for suppertime barbeques if we spent Father’s Day advocating on behalf of women’s and girls safety and, as a byproduct, for boys and men’s growth. If we can’t work to achieve peace in our homes how can we expect to end violence between nations?

Scan the headlines and there’s likely to be a story about a guy who’s beaten up his wife or girlfriend. Where I live in western Massachusetts, a man recently beat to death the daughter of friends’ of friends. It knocked the wind out of me. I never get used to it.

Over the years I’ve spoken at rallies in the aftermath of domestic violence murders and it never gets easier. A minority of men are perpetuating a cruel lie that says it’s okay for men to beat the woman they proclaim to love. Outrageous. It’s got to stop.

I know the vast majority of fathers—and men—aren’t violent. Yet there’s a small, vocal element out there promoting a dangerous, tough guy brand of masculinity. If the majority of nonviolent men stand mute, then manhood ends up being defined by screaming dads threatening coaches at Little League games, Rush Limbaugh and his ilk, and untold brooding brothers-in-law restricting contact with your sister. We can’t let that happen. The days of, “Hey, I’m a good guy, I don’t abuse my wife, assault women, or insist her ‘no’ really meant ‘yes'” should long be over. To challenge a twisted definition of masculinity that condones men subjugating women requires leaving the sidelines of silence for the playing fields of action. It’s a cop out to claim this epidemic is a women’s issue. For decades women have been doing the heavy lifting to prevent domestic violence. More men need to join. Now.

To start, we need to take a hard look at the privilege and entitlement we’ve long assumed as our birthright. We have to be willing to ditch the old model of men as king of the castle. There are greater rewards across the moat in the vineyards of equality: an increase in emotional literacy. Closer connections with the women and other men in our lives. Deeper relationships with our children.

Much has been made of President Obama taking his wife on a couple of dates recently. Commentators have been a twitter with how unfair many men felt it was, claiming the president had raised the relationship bar too high. President Obama deserves no extra points for paying attention to his marriage or his children. Sure, he’s modeling how a man and father ought to act but he’d undoubtedly agree that he merits no special pat on the back for doing so.

The idea behind Father’s Day as a time to acknowledge what it takes to raise children—and the precious gift of being a parent—is a wonderful reason to celebrate. But in a world where too many fathers and men are angry, hurt, and hurting others, maybe it’s time for a moratorium on conventional Father’s Day gift giving. Maybe some of the millions going to Hallmark and Wal-Mart could be better directed to a fund supporting women’s and children’s safety, and boys’ and men’s education. Maybe the president and vice-president would be among the first to make
contributions. That would be a stimulus package I could really get behind.

The Transformation of Eliot Spitzer