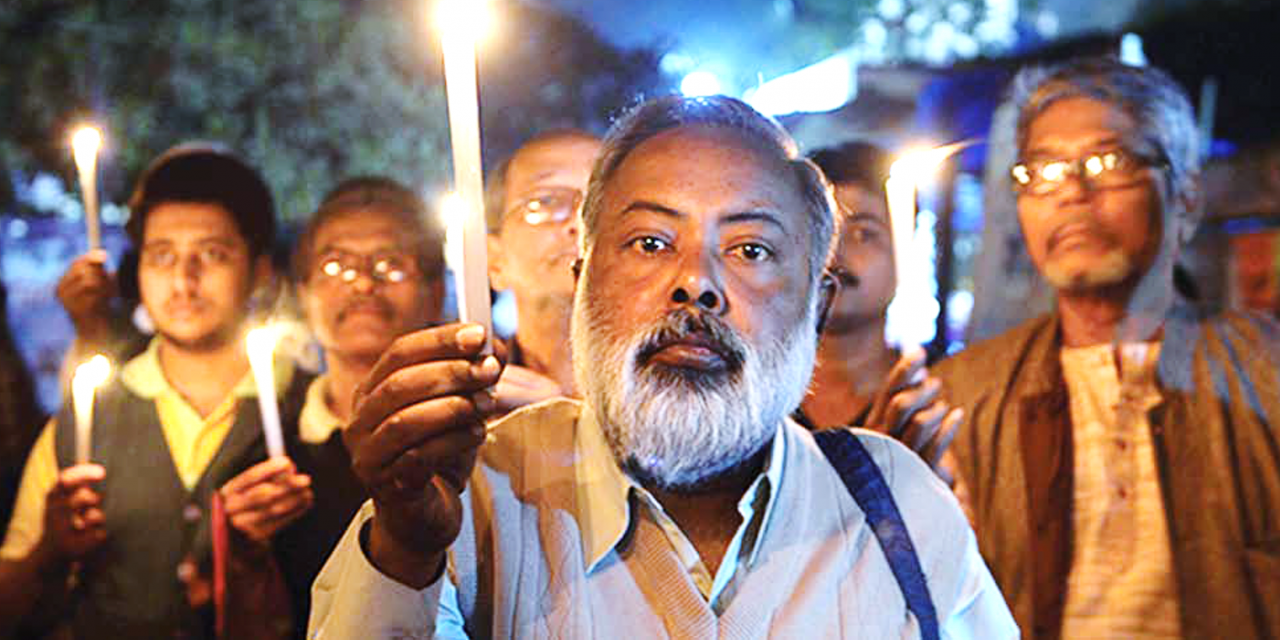 As a young boy growing up in India, I went to an all-boys school. Sports and particularly football and cricket were a major part of our school ethos. Being a slightly bookish boy, I was never very interested in either. I remember one particular day when I was around 14. Our sports instructor was particularly irritated with my lack of interest in playing sports with the other boys. Annoyed, he ran his hand aggressively through my hair, messing up my neatly combed locks. I was very upset. I sensed he did it to show his frustration at my “failure” to live up to his expectations. In the shock of the moment I burst into tears. He immediately told me “boys don’t cry” and walked away. I knew by this final dismissal that I had breached an unwritten code which infuriated him and saddened me. When these invisible codes are accepted unquestioning—when they go unchecked and unchallenged—young men can gain dividends because it works in their favor. For most of my boyhood, I did enjoy privilege owing to my gender. Like this situation with the coach, whenever I did breach the code I was made aware of it.

It is now, in my mid-twenties, living in the United Kingdom and studying gender that I realize how male privilege works at different levels in India. From a young age, boys and girls in that country are treated differently and are assumed to have inherently different qualities. Preference for sons at birth in India—among many countries in the Global South—has led to millions of female infants being killed at birth or killed through malnourishment and neglect. Investigations into the phenomenon of “missing women”—associated with sons having higher social, cultural, and economic status—suggests that this form of privilege has resulted in approximately 60 million women going “missing” in India alone. This bias against girls is an extension of the hidden privileges boys enjoy growing up in the country. Unfortunately such male bias does not end there.

In recent debates sparked around gendered violence in India, many men maintain an entitled position. Male privilege, invisible from birth, allows men and masculinities to proceed unchallenged. Excuses that boys and men are “naturally” more active or mischievous, or “biologically” more sexual and demanding, are repeated. Male behavior is explained away as just innocent “fun and games that sometimes get out of hand.” Such deeply embedded and naturalized assumptions about men and masculinities frame much of the debate about gendered violence in India; it allows Indian masculinities to remain outside the frame of questioning.

This reality became evident to me after the gang rape of Jyoti Singh on a moving bus in New Delhi in December 2012. The horrific incident captured the imagination of the nation; it sparked intense protests for women’s safety across India. What also became clear to me was that the protests were not just about this particular incident.

They were in fact an expression of frustration and anger over many forms of violence and aggression women experience every day. The thrust of the debates—and government policies following the gang rape—centered around “hanging the rapists” or “protecting women.” In the weeks following, the media and politicians kept talking about “helping” women while accepting violence toward them as something that “naturally” happens in India. Although an important silence about gendered violence had been broken in India, the role of men, and the way conventional masculinity is prescribed to Indian men, went unquestioned. 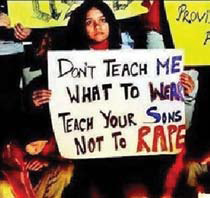 India’s “Don’t Teach Me” Campaign was launched following the rape of Jyoti Singh on a Delhi bus in December 2012.

Men’s invisibility is also clear in the official government responses to gendered violence. For example, India now has fast-track courts, better reporting procedures, more police officers and more stringent punishments for criminals, all attempts to make the country safer for women. However, there are no measures in place to try and stop men from committing violence against women in the first place, let alone any longterm measures to address issues of patriarchal masculinity and male attitudes. Further, the Justice Verma Report, the Indian government’s central response to gendered violence after Jyoti Singh’s rape, accepts the notion that violence against women is about power rather than sex. Although the report has good intentions and a holistic approach, its mandate was only to improve the legal framework for gender justice. No effective steps have been taken at the macro level alone to address the socially embedded nature of Indian masculinities and male privilege.

Interestingly, gender laws in India privilege men. Violence against women is defined as an “assault or criminal force to[wards] a woman with the intent to outrage her modesty,” according to the Indian Penal Code. Such ideas about the kind of beings women are assumed to be suggests that women as the marked gender, embody a “modesty” that is constantly being threatened. They do not spell out, though, that the threat comes from another gender—men. The perpetrators are invisible. In trying to “protect the modesty of women” patriarchal law tries to control women by bestowing (read burdening) “modesty” on them; a “modesty” women are not allowed to claim for themselves. From a sociological perspective, these laws define women as legitimate citizens only when they are “modest.” A woman who chooses to dress the way she wants, walk where and when she pleases is discounted; she cannot be a modest woman. In this context, there are also several assumptions about men and “appropriate masculinity.” In my own experience growing up in India, from childhood to adulthood, I was aware that young boys and men grow up inhabiting their gender identities without realizing—let alone ever being told—that we are also gendered beings. 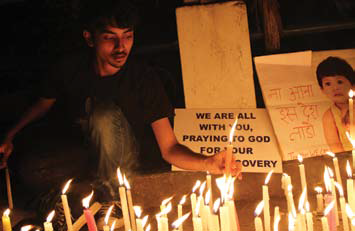 Men and masculinity pass as the norm but women and girls are the “gender” that needs protection, control and discipline. As men we are trained and expected to become “protectors” of and “providers” for our family. We are implicitly, and often explicitly, required to be strong, aggressive and without emotions. Of course not all men or masculinities are the same. Nonetheless, a continuum exists where a preference for sons instills in men ideas of entitlement and responsibility but at the same time frames women and their bodies in particular ways. On this continuum, males “naturally” behave aggressively, are strong-willed, and understand early that boys don’t cry. When this conditioning goes unchallenged, it inevitably cultivates conditions where men “naturally” perpetrate violence against women and other men as a “normal” part of society; it also legitimizes various ideas of “protection.” But who does this violence or why it is socially managed and perpetuated remains obscured, mostly hidden from Indian society’s view.

When I look back to my boyhood days in India, it is important to note that my ideas about masculinity were not forced on me by my sports teacher, my parents, or any specific individuals per se. They were simply part of the way Indian society was organized. As Indian men, we are conditioned into society as gendered beings through a complex web of social relations, obligations and expectations. It is true that men in India are not an internally homogenous group of dominators, but people who experience vulnerability, doubt and anxiety which plays out in complex ways.

However, as with any form of domination, the dominator often remains hidden. With race it is black that is marked; with sexuality it is homosexuality that is the other. Whiteness or heterosexuality—or masculinity—become the norm and as such are invisible. Similarly, the codes and privileges that come with being a man and its corresponding masculinity become invisible too. This was my case; I realized I could pass unnoticed as a boy in school if I played by implicit rules and expectations that were required of me. Problems would arise only if I started to deviate from the prescribed script of Indian manhood.

Addressing male privilege is not always easy because it is both deeply embedded and invisible. Additionally, given that so many individual men overseeing policymaking institutions, corporations and governments in India (not to mention the world over) have much to gain from maintaining male privilege, the task becomes particularly daunting. At the same time, we must not demonize all men. When I think back about the actions of my sports teacher, however badly they affected me at the time, I imagine he was likely following the script he’d been taught. He probably had no language or tools to think about or make sense of my inability to play by the rules. That is not to suggest excusing or condoning harmful male behavior, particularly violence toward women and other men. It is our duty to embrace the complexities and nuances of a gendered society. Trying to understand, and then making visible, men and masculinities at all levels is the crucial next step in ensuring a more holistic understanding of gendered relations in India and around the world.

Shannon Philip is a PhD student in international development at the University of Oxford. His research focuses on Indian masculinities, visual anthropology, gendered relationships and gendered violence. He is conducting ethnographic fieldwork with young Indian men in New Delhi and hopes to contribute to our knowledge about these men. He can be reached at shannon.philip@lmh.ox.ac.uk 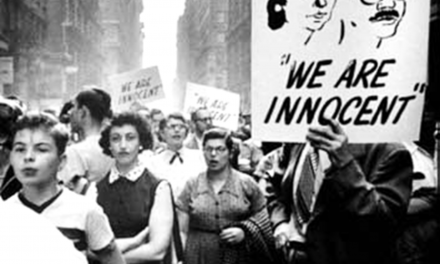