First published in the Guardian on 16th January 2019.

Fearful masculinity harms both men and women. There are better ways of growing up.

What strikes me most is the fragility. Gillette makes an advertisement calling on men to challenge abusive behaviour, and thousands furiously proclaim that they will never use its products again. The American Psychological Association issues new clinical guidelines, advising that a masculinity characterised by dominance, aggression and emotional repression can be harmful to men’s mental health, and the world’s conservative media falls into a collective faint. So much for the strong and silent types.

If “real men”, according to the men’s rights movement, are tough and commanding, why are the exponents of this doctrine so easily discomposed? Why does the slightest challenge to the norms they proclaim – by a razor ad or an academic body they had probably never encountered before – trigger this frenzied testeria?

In thinking about male identities, I’m struck by the inadequacy of the terms we use. The notion that men should be distant, domineering and self-seeking is often described as toxic masculinity, but this serves only to alienate those who might need most help. Its proponents describe their behavioural ideal as traditional masculinity, but conceptions of maleness, like conceptions of the family, have changed radically from century to century. In the furious response to the advertisement and the new guidelines, in the enthusiasm for Jordan Petersonand similar ideologues, what I perceive is a fearful masculinity.

If you are at ease with yourself, you don’t feel the need to call other men cucks. If you are strong, you don’t feel threatened by strong women. In a fascinating article last year, Pankaj Mishra argued that perceived crises of masculinity often accompany anxiety about economic or national decline. Just as humiliation in Vietnam stimulated an appetite for “such cartoon visions of masculinity as Sylvester Stallone and Arnold Schwarzenegger”, 9/11 helped to spread morbid fears about the emasculation of Western powers, and the need to assert a new ideal of manliness. The perceived loss of both political and gender dominance has provoked some men to respond with homophobia, misogyny and a crude attempt to restore male authority.

As the new guidelines reveal, fearful masculinity inflicts tremendous harm on men as well as women. The men who are most exercised about their manliness, a 2011 study suggests, are half as likely to seek preventative healthcare as those who are less anxious about male identity. They are also less willing to request psychotherapy. The American Psychological Association links these attitudes to the much higher rates of suicide among men than among women.

In researching both prostate cancer and loneliness, I discovered the extent to which manly reserve kills. Fears we cannot bring ourselves to name soon grow into terrible secrets. As they grow, they become still harder to share, and therefore to assimilate and endure. Because men have often been unwilling to discuss an issue that threatens their virility as well as their lives, funding for prostate cancer research has lagged behind the money allocated for other malignancies. As with breast cancer, effective treatment requires the breaking of taboos.

In writing about these issues, and in touring the album about beating loneliness I wrote with Ewan McLennan, I discovered that thousands of people seemed to have been waiting for permission to relax their stiff upper lips. In normalising our frightening conditions, in connecting with other people who have been suffering in silence, we find a collective strength we cannot find alone. Those who urge us to shut down, man up and grow a pair push us towards disaster and despair.

One of the many he-men responding to the new guidelines, David French, writing in the National Review, asserts that becoming a “grown man” requires “oppressive” discipline, aggression and risk-taking. But to me, growing up – whether as a man or a woman – means abandoning anger, aggression and the need to dominate. It means learning to talk about fear, loss, joy and love. It means learning both to listen and to share, to name your troubles and engage with other people’s. You need to be strong to admit your weaknesses. In admitting them, you build your strength.

The age-old mistake, that has stunted countless lives, is the assumption that because physical hardship in childhood makes you physically tough, emotional hardship must make you emotionally tough. It does the opposite. It implants a vulnerability that can require a lifetime of love and therapy to repair and that, untreated, leads to an escalating series of destructive behaviours. Emotionally damaged men all too often rip apart their own lives, and those of their partners and children. I see both physical fitness and emotional strength as virtues, but they are acquired by entirely different means.

Those who deny their own feelings tend to deny other people’s. Some men clearly find it easier to order a drone strike, separate children from their families or build a wall than to admit and address their own vulnerabilities. There is, as Madeleine Somerville has discussed in the Guardian, a powerful association between perceived masculinity and a lack of concern for the living world: real men don’t recycle. A study in the Journal of Consumer Research suggests that meat-eating is strongly associated with conceptions of maleness, which inhibit a switch towards a plant-based diet, essential to avoid environmental breakdown.

What sort of a man are you, if you have to go to such lengths to prove your masculinity? The confident construction of identity does not require crude cultural markers, but emotional literacy and honest self-appraisal. The more we proclaim our strength and dominance, the weaker we reveal ourselves to be. 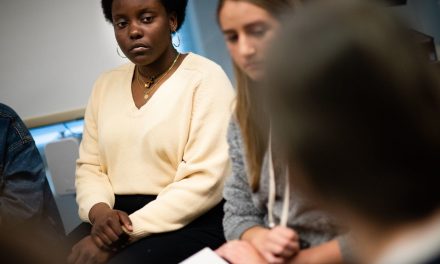 Teen boys rated their female classmates based on looks. The girls fought back.