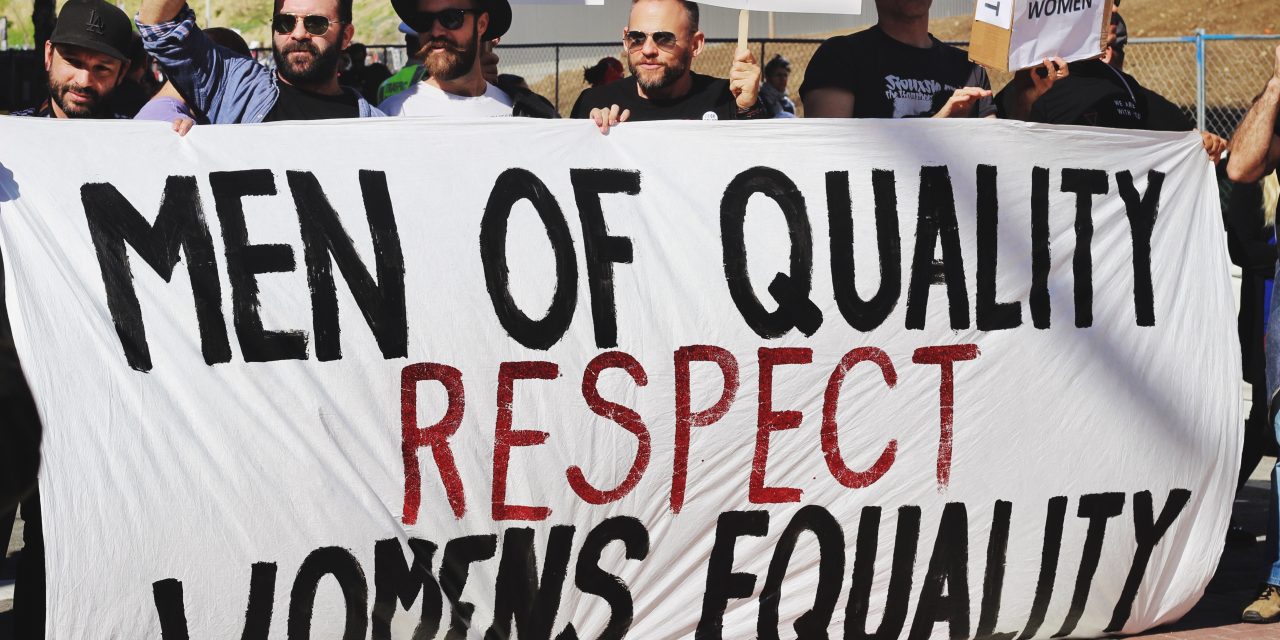 The white male bully temporarily occupying the White House represents the worst expression of manhood the U.S. has ever seen, but that dangerous truth is being obscured by so many of his other treacherous actions. Millions of words have been written excoriating the questionably elected president on a host of topics — from denying climate change to restricting minority voting rights; from sanctioning draconian drug laws to promoting harsh prison sentences for nonviolent offenders. Almost entirely absent in this blizzard of assaults on social progress is the predator-in-chief’s misogyny.

A virtual sea of pink pussy hats liberally dotted the heads of millions of women worldwide protesting Trump the day after the inauguration. Happily, plenty of men attended. But since then, as a gender, where have men been?

Consider: In a sworn affidavit, his exwife Ivana accused him in 1991 of rape. In a subsequent divorce deposition—while still saying her husband had “raped” her—she said she didn’t want this to be interpreted in “a literal or criminal sense.” Nevertheless, she added, “As a woman, I felt violated.” She downplayed her charge to secure a divorce settlement of $14 million in cash. As for Trump? He’s on record admitting to sexually assaulting women on the infamous Hollywood Access tape.

A simple question —a challenge, actually— for men: Why are we not standing up and speaking out to the effect that as men—sons, brothers, uncles, husbands, fathers, grandfathers—we unequivocally reject Donald Trump’s denigrating behavior toward women? He is no role model for children or grandchildren. Those of us who are fathers or grandfathers—or mentors, coaches, clergy—need to explicitly reject his misogyny—which his administration’s policies and a Republican-majority Congress are promoting. Otherwise, by our silence, are we not normalizing his behavior? To advance women’s rights, men must join women on the front lines: for reproductive rights, for earning a hundred cents—not 79 cents—on the dollar, for childcare, family leave, nutrition assistance, for adding, not cutting, afterschool programs, among a myriad of programs in jeopardy.

We face many crises today—from the health of the climate to the health of the Constitution. When it comes to advancing gender equality and justice, men have a singular role to play: modeling a sensitive, aware manhood. Let’s start by asking women how we can support them—and really listening to what they have to say. Then, let’s talk with other men about how we want to get our voices heard. The renter in the White House is the most visible exemplar of men behaving atrociously; unfortunately, he is not alone. If we want to prevent his minions from feeling emboldened, it is up to men to say yes to a compassionate, nurturing expression of manhood. Our children and grandchildren deserve nothing less.

“Every woman lied….Total fabrication. The events never happened. Never. All of these liars will be sued after the election is over.” — Donald Trump

A summary of the accusations lodged against the president:

Jessica Leeds (1980s) claims Trump groped her on an airplane. “[H]e was like an octopus…his hands were everywhere.”

Ivana Trump (1988) In a sworn deposition, Trump’s ex-wife accused him of raping her during their divorce in 1991.

Kristin Anderson (early 1990s) was at a nightclub when she felt Trump’s fingers slide under her skirt, move up her inner thigh and touch her vagina through her underwear.

Jill Harth (1993) claims Trump groped her under a table at a business dinner, then months later assaulted her at his Florida mansion. He “pushed me up against [his daughter’s bedroom] wall, had his hands all over me and tried to get up my dress….”

Jane Doe (1994) Anonymous accuser filed a federal lawsuit claiming Trump raped her when she was 13.

Temple Taggart (1997) claims Trump kissed her against her wishes in the 1997 Miss Teen USA pageant. “He kissed me directly on the lips.”

Cathy Heller (1997) claims when introduced to Trump, he “went for the lips” and kept her there “for a little too long…” despite her turning her head.

Karena Virginia (1998) claims “Trump grabbed my right arm. Then his hand touched the right inside of my breast. I was in shock, I flinched.” Trump asked her: “Don’t you know who I am?”

Mindy McGillivray (2003) claims Trump groped her at Mar-a-Lago. He “grabbed [her] butt.… All of a sudden I felt a grab, a little nudge…I turn around and there’s Donald.”

Natasha Stoynoff (2005), charges “Trump pushed me against a wall and forcing his tongue down my throat” when she was at his home to interview him and his wife.

Jessica Drake (2005) accused Trump of touching and kissing her without her consent, claiming he offered her £8,000 (about $10,000) and the use of his private jet to have sex with him.

Rachel Crooks (2005) claims when she introduced herself and shook hands, he wouldn’t let go and “kissed me directly on the mouth.”

Summer Zervos (2007) charges that Trump “aggressively kissed” her and placed his hand on her breast when she met with him at his hotel to discuss a job after appearing on The Apprentice.

Cassandra Searles (2013) Former Miss Washington was a contestant in Trump’s Miss USA pageant when she claims that he “continually grabbed my ass and invited me to his hotel room.”