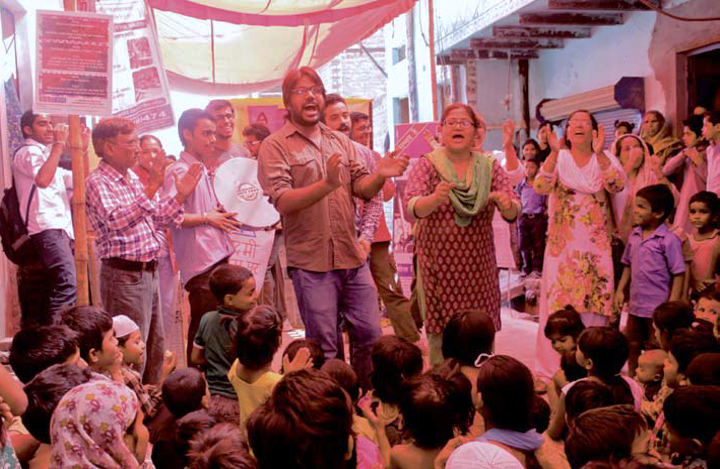 A creative campaign in India uses a range of techniques— from street theater to workshops—to foster dialogue on gender justice. It has reached more than 6000 people of diverse ages and across three-dozen places in New Delhi. The Ab Baaki Charcha campaign (ABC)—which means “Now, the Remaining Dialogue”—is a project the Delhi-based organization Mittika spearheaded in collaboration with the Forum to Engage Men and Humsaa, Sadak Chaap, KlodB and Alternative Spaces Foundation. ABC’s goal is to engage Delhi’s citizens, especially men and boys, in advocating for gender justice. The ABC campaign was part of a nationwide drive launched by the Centre for Health and Justice and the global MenEngage Alliance, the two groups that organized the global symposium “Men and Boys for Gender Justice” in 2014 that attracted 1200 people from 94 countries. ABC performances there invited dialogue with a diverse audience.

Equality in India is still a dream. Years and years of patriarchy and social conditioning lead people to perceive the world through the lens of male dominance, perpetuating gender injustice. But we can interrupt its harmful effects. When we launched ABC, we wanted to literally advance “the remaining dialogue”—to engage in a conversation that would inspire people to wrestle with the issue of gender. We wanted to talk to men, but not men alone. We wanted to reach citizens across class, caste, age, and gender to build consensus around a simple idea: gender is everybody’s issue. In fact, our name, Ab Baaki Charcha, came from this focus.

Since gender has so many dimensions, we adopted a range of arts-based dialogue methods to create a safe space where people could freely express themselves. Each method focused on specific aspects of gender uniquely tailored for each group. For example, we used the forum theater technique for working with large communities. In the forum technique, you stop the play in the middle and invite the audience to create solutions for the problems that came up in the scene being enacted.

In a play examining gender and socialization, we invited the audience to question

Here’s an example. In one play examining gender and socialization, we presented a family where twins were born—a girl and a boy—who were taught social norms, including how to conform to their gender roles. Relying on humor, we depicted the children’s grandparents “teaching” the twins how a boy and a girl should behave by pasting tags on them featuring words such as “soft,” “macho,” “resilient,” “homemaker,” “head of family,” and “tough,” among others. Then we invited the audience to question the tags and to remove and debunk each one that didn’t hold true for a particular gender.

The process of de-tagging touched a chord. People started reflecting on gender socialization and ended up deconstructing the whole process themselves. We had created a situation where the community—in our case, a sizeble street crowd—could question the stereotyped characteristics of masculinity and femininity, and debunk a range of myths about men and women. In the vignette described, when the process ended only one tag remained on the woman—“bears children.”

Other topics we highlighted included masculinity, safety in public spaces, gender-based violence, and the need for bystander intervention. 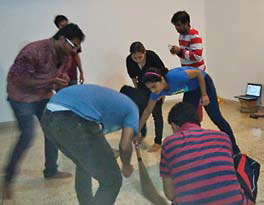 Another technique we used was dance and movement workshops that explore gender-based violence and safety. In small group workshops, participants were guided through movement exercises to identify how it feels to experience a range of feelings— violence, freedom, oppression, isolation, community, equality, among others. Through a reflective process, participants recognized how gender and violence are linked, causing one man to conclude, “If I feel this way, I shouldn’t inflict violence on anybody else.”

Magic shows were another way we related people’s personal experiences of gender. In one scenario, a magician displayed two ropes—a boy rope and a girl rope—and declared that men and women, girls and boys are the same. “So,” the magician would say, “let’s cut this rope to an equal length.” The “trick” was, of course, no matter how much of a big deal he made about cutting the rope into equal sizes, it would never happen. The facilitator/magician would ask the audience, “So why isn’t it happening?” After a few seconds, the answers would start pouring out. “Because women are not considered equal in society,” a man would say. “Because women are controlled by men,” a woman would add. Thus were sowed the seeds of reflection. 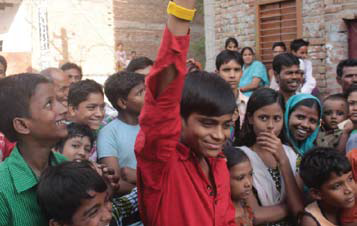 Magic shows were another way the program related people’s personal experiences of gender.

We addressed gender, power and masculinity using movies as reference points to spur discussions about patriarchy and masculinities. To let people express personal experiences and stances on gender, we employed small group discussions, polling, poster and slogan making, and bubble writing. In polling, for instance, we used a chainlinking activity. We’d start with a statement like “I believe that both women and men should stand for gender justice” and ask people to add a loop to the chain if they agreed with the statement.

At the heart of ABC was our team: open-minded people with whom our audiences could easily connect. Our team was bound together by their passion for the art forms they practiced and the experience of a deep, reflective process to identify gender in their own lives.

In a short span of time, our group, Ab Baaki Charcha—“Now, the Remaining Dialogue”—succeeded in reaching out to audiences as diverse as is Delhi—from resettlement areas to middle-class communities, from urban neighborhoods to educational institutions. The process remained energized because more than trying to tell people what to do, we used a campaign based in the arts to bring people along on the journey to a more equal world.

Durba Ghose is cofounder and director of Mittika, a New Delhi–based social enterprise group working to reduce the gap between social development, people’s everyday experiences and the arts. Mittika consults and collaborates with diverse stakeholders in order to build a society free of discrimination. It focuses on gender justice and young people’s rights to development and participation. It works with organizations, institutions and communities in India and elsewhere in South Asia. www.mittika.co.in