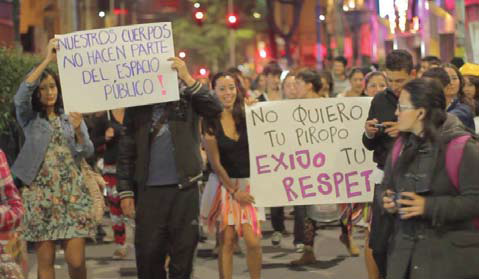 It’s on Us to Stop Street Harassment

Meet Us On the Street, a program of Stop Street Harassment (www.stopstreetharassment.org), works to raise awareness about the insidious nature of street harassment. They have a simple message: it’s not okay. And they have straightforward approaches to working to stop it, among them: International AntiStreet Harassment Week ,held in April, was the sixth annual week of awareness. Groups and organizations in dozens of countries participated, employing creative approaches to draw attention to what some have described as an epidemic. This year’s wrapup report is being worked on; to read 2015’s, go to: issuu.com/stopstreetharassment/docs/antistreetharassmentweek2015wrapup.

Organizers say that even though activists and individuals around the world work hard yearround to make public places safer, a onceayear coordinated campaign amplifies everyone’s voices and makes the global mainstream media pay attention by collectively speaking out together. 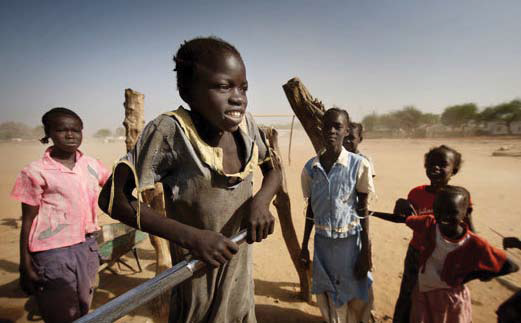 Thousands of women and girls, mostly in South Sudan’s Unity state, have been abducted by government soldiers and allied militias for sex slavery during the brutal civil war that started in 2013.

Since South Sudan became an independent country in 2011, it has disintegrated into catastrophic war. Thousands of people have been killed and around two million displaced in a civil conflict that erupted in late 2013 between forces loyal to President Salva Kiir and those led by his former deputy, Riek Machar. Although the two warring sides agreed to a peace deal in early 2016, violence continues and women and girls are still being forced into sexual slavery and raped by soldiers.

In 2014, those monitoring the conflict began to report rape on a massive scale. Human Rights Watch says tens of thousands are still crowded into UN bases, and the camps don’t always provide safe haven for women and girls.

Last June, reports surfaced of women and girls being raped repeatedly by soldiers, under the nose of the UN peacekeeping mission. The deputy head of the UN’s mission in South Sudan, Toby Lanzer, admitted that,“there have been incidents which have happened right outside our gates….” In July of 2015, the UN uncovered evidence of South Sudan’s army raping and then burning girls alive inside their homes.

Some women reported being taken as “wives” by soldiers from Army-affiliated militias and kept for sexual slavery in barracks where they were raped repeatedly. Witnesses said attackers often killed women who resisted them, made eye contact, or showed signs of being unable to withstand continued gang rape.

In a petition on Change.org, Annie Kraus of Denver, Colorado, wrote: “This is unacceptable…this violence and exploitation simply cannot be allowed to continue.” Kraus has called “for immediate action to end the mass rape of women and girls in South Sudan…. Girls should be allowed to be girls,” Kraus said.

To watch a video on the situation go to: https://www.youtube.com/watch?v=y7HLF4CxXlw. Note: The content includes extremely disturbing images. 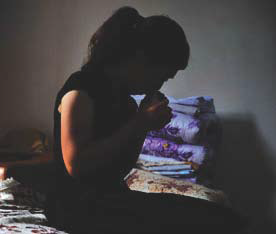 A violent attack in Beijing in April set Chinese social media ablaze, calling attention to the indifference female Chinese assault victims encounter when trying to seek justice. According to Foreign Policy, surveillance footage from a hotel in an affluent Beijing neighborhood showed a man dragging a woman down a hallway. The man grabbed the woman’s neck and pulled her hair as she struggled to escape. A hotel worker didn’t intervene; nor did several passersby. When a bystander grabbed the woman’s arm, the assailant ran away.

Police told the victim investigators wouldn’t be available until the next week.

Would citizen and police indifference compel a Chinese woman to endure abuse with no consequences for the abuser? No! Social media made the difference.

The victim uploaded a video where she commented on the surveillance footage, writing that her assailant had asked for her room number and when she refused to tell him, became violent. The video went viral; on Youku it received more than seven million views. On Weibo, thousands of users reacted angrily to the victim’s complaint that police continued to deny her information on the case. They called her their “sister.”

One of the ruling Chinese Communist Party’s founding principles is equality between women and men, and recent changes in legislation introduced harsher penalties for rapists and child abusers. In December 2015, China’s legislature passed a domestic violence law, although it does not directly address sexual violence.

Getting Men Talking to Men About Stopping Domestic Violence 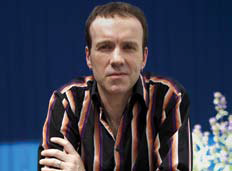 No one is better at convincing a man to work to end domestic violence than a fellow man, according to Australian sociologist Michael Flood.

No one is better at convincing a man to end domestic violence than a fellow man, according to a longtime Australian activist and sociologist.

“Research shows that men listen much more to men than to women. That’s unfortunate, as it could mean we don’t always respect women’s voices,” says Michael Flood, an associate professor of sociology at Australia’s University of Wollongong. “However, it also means that men can be powerful advocates. When men speak out— at work, at church, in a community—other men are more ready to listen and give more authority to what they say. This means that men have a very important role to play,” Flood told journalist Sara Carabott of the Times of Malta.

“It is important to involve men because men are part of the problem and part of the solution. To end domestic violence, we will have to change not only men’s behavior, but also their attitudes,” Flood has long believed.

“Most men do not use violence. However, they tolerate it or do not see anything wrong with a man taking advantage of a drunk woman, for example,” Dr. Flood added.

Flood says that to end violence there needs to be a change in thinking. One way to do so is to intervene with schoolage children, teaching them that domestic or sexual violence is unacceptable. He advocates offering students classes on healthy relationships along with mathematics and English.

Flood was in Malta as part of the Australian High Commission’s Public Diplomacy program, which includes a collaboration among the country’s Men Against Violence organization, the President’s Foundation for the Wellbeing of Society, and the University of Malta.

Trump’s Hands-Off Fathering: I Provide the Funds, She Takes Care of the Kids 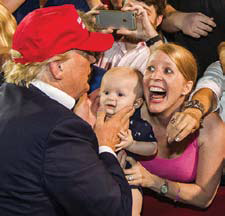 If alienating women wasn’t enough, Donald Trump is infuriating another massive voting block: parents. While the Republican presidential candidate portrays himself as a family man, often joined on the stump by his three eldest children—Ivanka, Donald Jr., and Eric— his comments in past interviews reveal retrograde ideas about fatherhood that are out of step with today’s America, where both parents work in nearly half of all twoparent households.

Buzzfeed reviewed interviews from 2003 to 2007, in which Trump held forth on fatherhood, taking care of the kids, and parental gender roles. The real estate mogul’s message about parenthood: Dads supply the money, moms do everything else.

No hands-on to care for his kids

“I mean, I won’t do anything to take care of them. I’ll supply funds and she’ll take care of the kids. It’s not like I’m gonna be walking the kids down Central Park,” Trump said in a 2005 interview with Howard Stern. “Marla used to say, ‘I can’t believe you’re not walking Tiffany down the street,’ you know, in a carriage. Right, I’m gonna be walking down Fifth Avenue with a baby in a carriage. It just didn’t work.”

In a 2007 interview, Trump told Stern about his relationship with Tiffany, his daughter with Marla Maples. Trump said that Tiffany visits him, “You know for about an hour, ‘Hi dad,’ ‘Hi Tiff, I love you, Tiff.’ She’s a great kid,” says Trump, who tells Stern that Tiffany’s a smart girl—something he knows because he “glances” at her report cards. To see the full article, go to https://www.buzzfeed.com/andrewkaczynski/donaldtrumpthinksmenwhochangediapersareactingliket?utm_term=.wy55gEAGR. 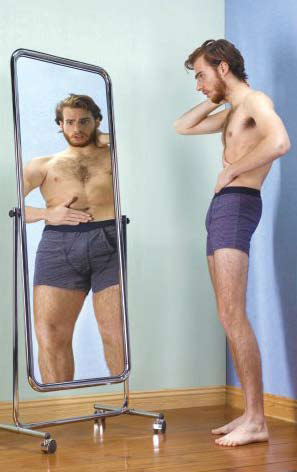 A new study of a national sample of adolescent boys reveals that nearly 18 percent are highly concerned about their weight and physique.

Some adolescents demonstrate an extreme focus on physique and begin to engage in potentially dangerous behaviors, according to a new report published in JAMA Pediatrics (the Journal of the American Medical Association). Such behaviors can be a signal of an eating or weightrelated disorder—in males just as much as in females.

Although awareness of the risk of weight disorders among males is growing, there is still a problem with underrecognition, according to Dr. Alison Field, an associate professor of pediatrics at Boston Children’s Hospital and the lead author of the study. The underrecognition is primarily because it’s been assumed the disorders look the same in males as they do in females. Current assessments for eating disorders focus on the classical presentation typical of females, but since young men are often more concerned with gaining muscle than becoming thin, they typically don’t present as underweight, as girls often do. They’re also not as likely to starve themselves, use laxatives or induce vomiting; instead, they’re much more likely to engage in excessive amounts of exercise and steroid abuse. “Instead of wanting to do something unhealthy to get smaller, they’re using unhealthy means to become larger,” Field says. To read the full JAMA article go to: http://archpedi.jamanetwork.com/article. aspx?articleid=1766495. 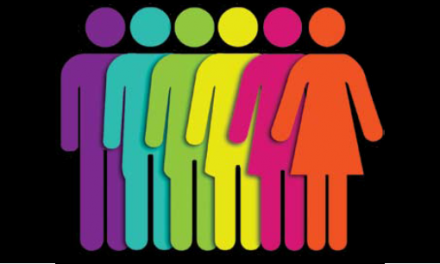 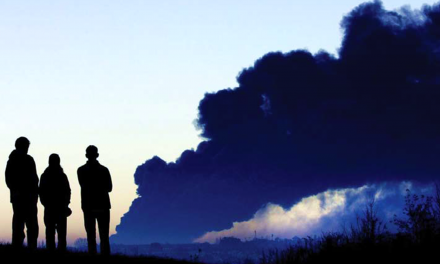