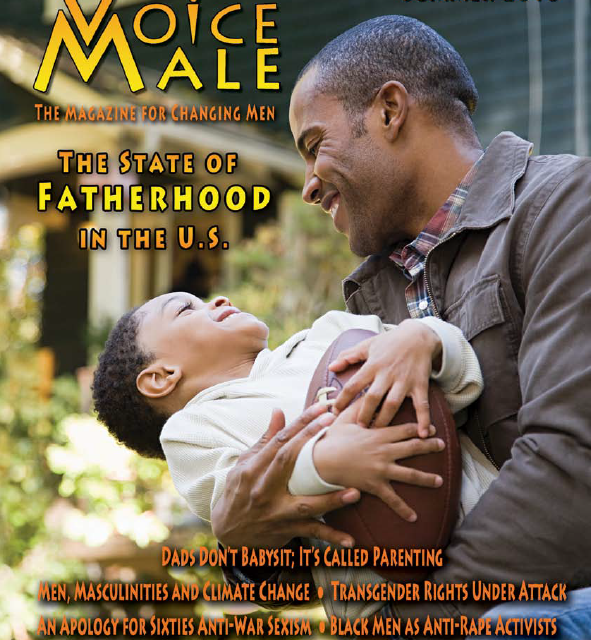 Finally…A Bill of Rights for Rape Survivors
By Stacy Teicher Khadaroo
Shaheen’s Sexual Assault Survivors Act would offer states small grants to help them share information with victims about their rights when they first step into a hospital or police station.

A Men’s Apology for Sexism in the Sixties Anti-War Movement
By Tom Gardner
Our email occurred as planning was under way for the first reunion of the antiwar movement. It would mark the 50th anniversary of the introduction of U.S. combat troops in Vietnam and the 40th anniversary of the end of U.S. direct military involvement in the war.

The State of Fatherhood in the U.S.
There is a tale of two fatherhoods in the United States. High-income dads are championed for playing active roles in their children’s lives and they’re getting head-lines, while low-income, many nonresident, dads are often either valued or stigmatized simply by their ability to pay their way. The U.S. is in urgent need of policies and support so that all fathers can realize their roles as fully engaged, fully equal caregivers, argues the first ever report on fatherhood in the U.S.

Breakthrough Needed to End Violence Against Women
Mallika Dutt and Sonali Khan have an ambitious goal: to mobilize an entire generation to put an end to violence against women—and men are at the heart of their campaign.

Is the Ideology of the Transgender Movement Open to Debate?
By Robert Jensen
Longtime gender justice activist, author, journalism professor, and VoiceMale contributing editor Robert Jensen doesn’t shy away from controversy. As an observer of how the transgender movement relates to the larger question of challenging patriarchy, in in the essay below, Jensen raises important questions, spotlights challenges and expresses concerns about the ideology of the trans movement.
A Response to Concerns —Rob Okun, Editor

Men, Masculinities, and Climate Change
A Special Promundo-MenEngage Report
In a revealing new examination of gender and climate, a group of activists and researchers aim to establish a rationale for under-standing boys’ and men’s multiple roles in climate change. Men, Masculinities and Climate Change presents—and analyzes—key areas for further exploration of masculinities (the characteristics associated with what it means to be a man) in patriarchal systems that play a contributing role in perpetuating climate change. As a concept paper, Men, Masculinities and Climate Change explores opportunities to engage men and boys as agents of positive change, alongside women and girls, and further strengthens the call for social, economic and environmental justice for all.

An African Approach to Global Health
By Chibuike Alagboso
Sustainable development goals are a “Plan of Action for People, Planet and Prosperity,” says Chibuike Alagboso, that African nations are working toward over the next 15 years. The goals include strengthening efforts to advance universal peace, eradi-cating poverty, and ensuring no one is left behind. What does the goal of ensuring healthy lives for all at all ages mean in practice, and how can it be turned from a catchphrase into action? “That,” Alagboso writes, “still need[s] to be worked out….”

A Poet’s Long Journey from Domestic Violence
By Maria Luisa Arroyo
Poet María Luisa Arroyo was the featured speaker at the 40th anniversary celebration of the New England Learning Center for Women in Transition, one of the oldest domestic and sexual violence prevention organizations in the region, serving north-western Massachusetts. What follows is an edited version of her remarks.

Even though Pakistan has finally taken a positive step forward to foster gender equality, some men still believe the mistreatment of women is their God-given right. The backlash began when the Pakistani government introduced the Protection of Women Against Violence Bill, which effectively criminalizes violence against women in Punjab, the country’s most populous region. Before the law was officially enacted on March 1, diehard extremists attempted to block the legislation, saying it would “destroy the family system in Pakistan” and “add to the miseries of women.” In denouncing the law, some right-wing Islamist leaders say it contradicts the Quran and will increase divorce rates.

How to Respond to Sexist Remarks
By Alan Berkowitz
Much progress has been made in addressing sexism in American culture. While the profeminist men’s movement has contributed to this evolution, it is undeniable that there is much more to be accomplished. Many of us can attest that remarks and behaviors that would have seemed inoffensive or “normal” some years ago are now correctly labeled as sexist, inappropriate, and in need of a response. In the language of bystander intervention theory and research now, more than in the past, we “notice the event,” “interpret it as a problem,” and “feel responsible for responding to it.” The question is: how to respond? What are some tools and ideas for effectively, appropriately, and safely responding to sexist and other prejudicial language that we experience in our daily lives?

From the Editor
Fear vs. Safety in North Carolina
by Rob Okun
Fear is making quite a showing in a large swath of the U.S. It’s amassed a lot of votes, including a huge number of delegates to the Republican national convention in Cleveland. And fear seems to be outpacing safety and tolerance, even as those old reliables remain indefatigable. Citizens standing up for safety and tolerance need to be more outspoken. Will they be at the Democrats’ convention in Philadelphia?

Colorlines
Black Men as Anti-Rape Activists
By Ahmad Greene-Hayes
In the midst of the Black Lives Matter movement, I often wonder where are the black men mobilizing against sexual violence against black women? Have we hidden—like the biblical David—away from the eyes of our communities because we are secretly invested in rape culture? Are we afraid because we do not actually know what sexual violence looks like?

Fathering
Dads Don’t Babysit; It’s Called Parenting
By Emma Wilson
More than 3,000 people have responded to the suggestion that dads are only “babysitting” when they are, of course, parenting.

Outlines
Equal Protection for All Under the Law?
By Allison Steinberg
There are a number of bills in state legislatures across the country and in Congress; some that would protect LGBT people from discrimination, and others that would roll back existing protections or open the door to discrimination against gay and transgender people.

Notes from Survivors
Post-Traumatic Growth
by Randy Ellison
We’ve all heard of post-traumatic stress disorder. It refers to changes in the brain and our functioning after an experience of extreme trauma. It can actually change our genes and the wiring of our brains. Military veterans and survivors of physical and sexual assault are common victims of PTSD. The new buzz phrase is “trauma informed treatment” for survivors of sexual and gender-based violence. It is important to understand how trauma affects the brain to understand what the survivor is experiencing. 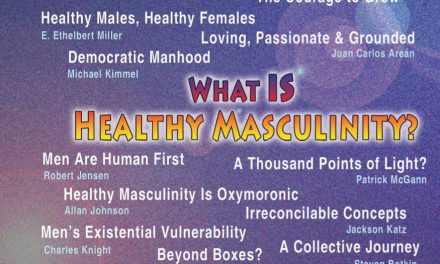 The Unspeakable and Men’s Lives