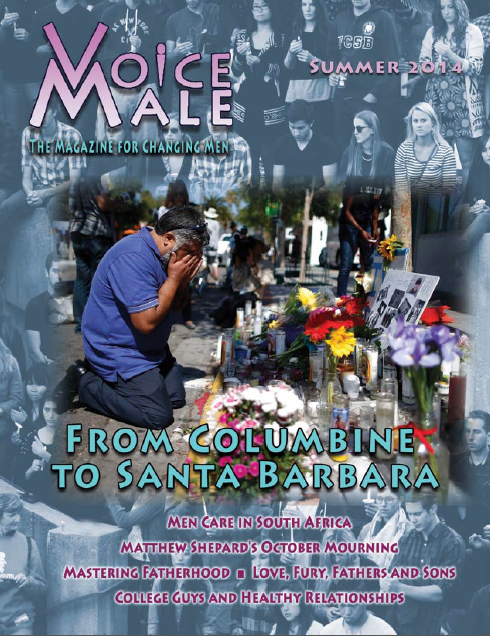 FEATURES
Fifteen Years After Columbine: We’re Still Asking the Wrong Questions
An Interview with Jackson Katz by Jeremy Earp
On April 20, 1999, high school seniors Eric Harris and Dylan Klebold walked into the cafeteria and library at Columbine High School in Littleton, Colorado, began shooting, and killed 12 of their classmates and a teacher—and wounded dozens of others—before taking their own lives.

Toxic Masculinity Unmasked: The Santa Barbara Tragedy
Kevin Powell
What exactly is a man? This is the question that has been pounding in my head since first watching Elliot Rodger’s chilling “Retribution” YouTube video posted right before he went on his stabbing and shooting rampage in Isla Vista, California.

Men Care In South Africa
Colin Adam Young
In the northern areas of South Africa’s Western Cape almost half of the population is jobless. Liquor stores in the towns provide a predictable outlet for people’s boredom and frustrations—and contribute to a range of social problems: fighting and aggression, substance abuse, domestic and sexual violence, child abuse and absent parenting.

Profeminist Men’s Work: The Early Days
Dick Bathrick
In the late 1970s and early 1980s, small groups of men began to mobilize, joining the women-led movement to end violence against women. The sociopolitical climate in which the battered women’s movement gained momentum, had been powerfully influenced by the social justice movements that had simmered and exploded during the preceding decades.

Love & Fury
Richard Hoffman
Prize-winning poet, essayist, and fiction writer Richard Hoffman is the author of Half the House, a memoir about coming to terms with the childhood rape he suffered at the hands of his baseball coach. In his new memoir, Love & Fury (Beacon Press, June, 2014) Hoffman grapples with the legacy of his boomer-generation boyhood in a rustbelt Pennsylvania town. Along the way, he explores the often unspoken values men inherit and draw upon as they navigate their roles as husbands, sons, fathers, and grandfathers. Tracing five generations of his family’s history, focusing particularly on his complicated relationship with his father, “a man given to extremes of grief and rage, to violent turns of emotion,” Hoffman asks difficult questions about how poverty and shame, faith and disillusionment, and sex and exploitation, affect men’s daily lives.

Fathering Mastery
Haji Shearer
It’s a great time to be a father!
For most of recent history, raising children has been the primary responsibility of women. In the last 30 years a new world has opened up for men to play more significant roles in bringing up the next generation. As more fathers became involved in raising our children, men realized what mothers have always known: children are amazing! Involved fathers report higher overall satisfaction in their own lives, not to mention the myriad benefits that an involved father brings to his children.

Male Privilege Redefined, Not Negated
John A. McCarroll
The sort of language used to assert men’s dominance over women has a pretty recognizable pattern across the cultural landscape. Men, we are told, are in charge of things because they have something women (supposedly) lack: physical strength, honor, higher cognitive facilities, or the mystique of the male organ itself. Women, sadly “lacking” these qualities, need to be “protected” from the all-consuming lusts of strange men.

COLUMNS & OPINION
From the Editor
Wanted: Men to Change Masculinity Narrative
At Father’s Day this year, it was hard not to think about the fathers whose children were murdered in mass killings. My thoughts turned to the fathers—and mothers—of those slain in Isla Vista, California in the aftermath of Elliot Rodger’s misogynist-fueled rampage. Just as the Sandy Hook fathers felt the ache in their hearts, so do these men.

ManTalk
What Every College Guy Oughta Know About Good Relationships
In the midst of growing outrage and deepening concern about sexual violence, sexual harassment, and the flourishing of rape culture on our campuses, Voice Male contributing editor Michael Kaufman has written a guide aimed at campus men. It takes an accessible and honest look at these issues and provides a positive approach to help young men learn about the consequences of their words and actions. The booklet applies to all relationships, although the particular emphasis is on men’s relationships with women because that’s where most (but of course not all) dating violence occurs. This excerpt about consent was inspired by Harry Brod’s lecture “Beyond, ‘But we were both drunk’: The Ethics and Erotics of Sexual Consent” (www.harrybrod.com).

Men and Sports
Paternity Leave on the Diamond
Are we living in 2014 or decades ago? Former NFL quarterback Boomer Esiason and sports radio commentator Mike Francesa trashed New York Mets second baseman Daniel Murphy for missing opening day of the baseball season to be with his wife for the birth of their child. In case you missed it, Esiason opined, “I would have said, ‘C-section before the season starts. I need to be at Opening Day. I’m sorry, this is what makes our money. This is how we’re going to live our life. This is going to give my child every opportunity to be a success in life. I’ll be able to afford any college I want to send my kid to, because I’m a baseball player.’” Francesa was no better, commenting, “You’re a major league baseball player. You can hire a nurse.” Francesa also called the paternity leave at his own company “a scam-and-a-half.”

Fathering
The Broad Brushstrokes
In his new book, When the War Came Home (Levellers Press), Bill Newman, a noted ACLU attorney, shows how the idealism of the anti–Vietnam War movement still lives—most importantly in the lives of the children of that generation. The title of the book refers to the spring day 44 years ago when the Ohio National Guard opened fire on anti-war protesters at Kent State University, killing four. Following is an excerpt from Newman’s book that looks at fathering, and raising daughters. He wrote it in the summer of 1998.

What Every College Guy Oughta Know About Good Relationships