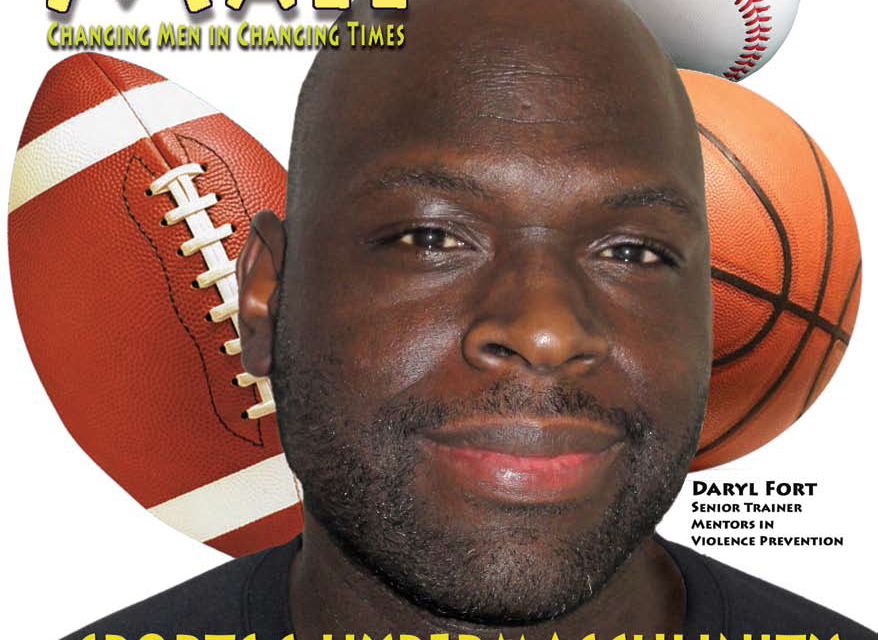 E. Ethelbert Miller, Shira Tarrant, and Stephen McArthur
Is There a Future for “Man Up?”
From time to time Voice Male has asked contributing editors, national advisory board members, and other colleagues to submit short essays. In Fall 2012, a number responded to the question “What Is Healthy Masculinity?” In the three pieces that follow, two advisory board members and a longtime contributor weigh in on the question “What comes up for you when you hear the phrase ‘Man up’?”

Gregory Jaquet
Working with Violent Machistas in Costa Rica
David now stands like a policeman—legs apart, hands on hips. He seems to reach for his belt, gun, and handcuff holster to pose. But he’s no longer a cop. He’s exposed, alone. And he tells his story to the group of men who have chosen to become “better” and to renounce violence by participating in these workshops.

Charlotte and Harriet Childress
Why White Men Keep Mum about the White Maleness of Mass Shootings
Unlike other groups, white men are not used to being singled out. So we expect that many of them will protest it is unfair if we talk about them. But our nation must correctly define their contribution to our problem of gun violence if it is to be solved.

Jackson Katz: An Interview with Mentors in Violence Prevention’s Daryl Fort
Sports & Hypermasculinity: Violence, Male Culture and the Jovan Belcher Case
Jovan Belcher’s murderous actions formed one of those teachable moments. Since then, countless people inside and outside sports culture have been talking about domestic violence and asking: what can we do? To provide some badly needed context for the national conversation sparked by the Kansas City tragedy, Voice Male agreed to provide a forum for me to engage in a dialogue with my friend and MVP colleague Daryl Fort.

Rob Okun
I’m Mad As Hell at Conventional Manhood
Belcher killed his “beloved” Kasandra Perkins, 22-year-old mother of his three-month-old daughter Zoey, at their home and then drove to team headquarters and killed himself in front of his head coach, general manager, and other staff. Missing from the news accounts? It’s the masculinity, people.

Miriam Zoll
One Egg, Please, and Make It Easy
A few weeks later, we met with a veteran physician I like to refer to as the Silver Fox. He greeted us with a warm handshake and a smile, and gave us time to look at his marble egg and photos of ferocious sperm fertilizing healthy eggs. Once he read through our medical records, he sighed very dramatically, clasped his hands together on top of his desk, and looked me straight in the eye. “The first thing I want to say is that you’re old.”

Floyd Dell
Feminism for Men in 1914
The change is already under way. Irresistible economic forces are taking more and more women every year out of the economic shelter of the home into the great world, making them workers and earners along with men. And every conquest of theirs, from an education which will make them fit for the world of earning, to “equal pay for equal work,” is a setting free of men.

From the Editor
The End Days of Wayne LaPierre
In the years to come I believe Mr. LaPierre will be seen as a throwback to a bygone era. I know, I know; we’re not there yet. You may call me a dreamer—I already shared one of my dreams—but I’m not the only one. Sooner than later, he will be marginalized as a credible voice representing the will of the American people, replaced perhaps (besides the next Jason Collins) by the eloquent voices of the heartbroken fathers of Sandy Hook murder victims.

Men & Health
Under Armor: From Power and Control to Letting Go
Reevaluation counseling teaches that among our earliest hurts is to be taught that our innate healing response (the free discharge of emotions) is something we should interrupt—males get this in the form of “big boys don’t cry” and “real men are tough” (which for many means numb). So we men often mask our fear, shame, and sadness with anger or prickliness—the sanctioned male emotions.

OutLines
Coming Out on the Court of History
We live in a moment of great transition. The fear of being misperceived as gay remains fully in force among straight guys—even while being correctly perceived as gay seems to have begun its decline into the dustbin of archaic forms of discrimination. Being gay is losing its magical power to define a person, while being perceived as gay still terrifies young guys into gender conformity.

Masculinity & Race
Why Every Black Man Should Wear Number 42
What does the film 42 tell us about black masculinity? It tells us that it demands equality, excellence, and independence. It is questioning, humble, yet fierce. It is accommodating but never submissive. Yet there is the underlying loneliness of the black male.

Notes from Survivors
Knowing Your Offender: Navigating Your Healing
As a survivor, I may have many rationales for why the abuse happened, but no matter what, in my heart I truly believed it was brought on by something I did or did not do. The mantle of shame was mine to wear until I finally did the work to be able to take it off.

Poetry
The Taste of a Little Boy’s Trust