Why I Insist on a Woman’s Right to Vote
Frederick Douglass
Frederick Douglass was one of the few men present at the pioneering woman’s rights convention in Seneca Falls, New York, in July 1848. His support of women’s rights never wavered, and he remained a constant champion of the right of women to vote.

Vets for Peace: “Thank You for Your Service”
Michael A. Messner
For one who regrets his military actions and is critical of past and current U.S. wars, the mantra “thank you for your service” is loaded with ideological and emotional baggage.

Deferring to Men
Linda Stein
Female restrictions went deeper than just posture, as we accepted the cultural norm of displaying deference to men in words and demeanor.

Why Men Must Join the Gender Equality Revolution
Michael Kaufman
I wanted to sum up my own role in issues and efforts that I, along with many wonderful friends and colleagues, have been devoting much of our lives to.

Capturing the Boggart of Patriarchy
Rimjhim Jain
Like the JK Rowling creation, the shapeshifting Boggart—a creature that no one knows what it looks like but which gives evidence of its existence by assuming the form of one’s deepest fears—patriarchy continually emerges in different, unsuspecting forms.

Learning from Young Feminists in Chile
Pamela Saavedra Castro
Last May, young Chilean women proclaimed, “Enough is enough” and started to tell their stories of harassment at universities, including how authorities failed to act to prevent their mistreatment.

What’s the Best Way for Men to Be Profeminist?
Alan Berkowitz
Thinking that men don’t need to hear criticism from female advocates is a great danger because it is likely a sign of egoism, self-protection and unconscious male posturing.

To Heal My Wounds, I Work with Men and Boys
Diederik Prakke
I wanted to be there for my children as an awake and vulnerable but brave father—as the father I missed.

From the Editor
There is No War on Men (but There Are Peace Talks)
Among the complex range of experiences that make up manhood—and the continuum of masculinities—some men are not only uncovering the source of their own pain, but also getting in touch with their accompanying, heart-wrenching feelings.

Poetry
The Silence Is Broken
by Anne Eastman Yeomans 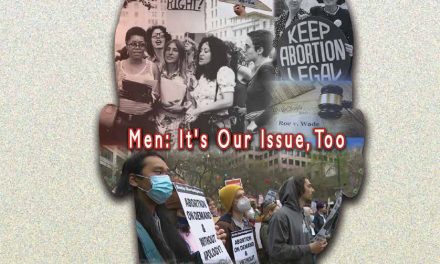