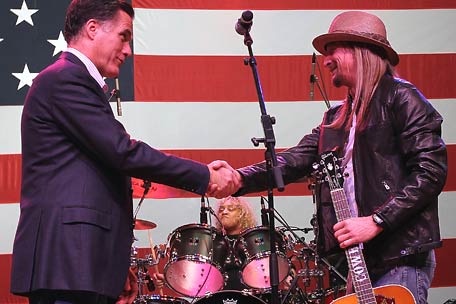 Mitt Romney’s strange association with the misogynist Kid Rock is hypocritical and inexcusable.

Few eyebrows were raised a couple of weeks ago when the Michigan native musician Kid Rock introduced Republican vice-presidential nominee Paul Ryan at a campaign stop in suburban Detroit, and Ryan returned the favor by calling the misogynist rocker a  “great citizen.”  The moment passed largely without critical commentary, as did a Rock performance at another Romney campaign event in Colorado last week.

But in an election year in which issues of women’s sexuality, definitions of rape, access to contraception, and the future of legal abortion have played a prominent role—and the Republican “war on women” has been a durable campaign meme—the Romney campaign’s partnership with Kid Rock (who wrote and recorded “Born Free,” Romney’s campaign theme song) should be cause for alarm.

At first glance, a Romney-Kid Rock alliance seems unlikely, if not bizarre.  After all, Romney and Ryan are close to the central-casting definition of squares:  slightly awkward, wonkish, white conservatives, especially the Mormon Romney, who eschews alcohol, tobacco, and other paraphernalia of the libertine life.

And Kid Rock?  He’s the artistic embodiment of a hybrid rock-rap-country white guy musical persona that celebrates not only libertarian selfishness, but openly revels in a kind of “who gives a f*** defiance of social convention and middle-class respectability. Rock (né Robert Ritchie) is also one of the most aggressively misogynous figures in popular culture.

The lyrics of his songs are filled with references to women as “bitches,” “hos,” c*#ts and worse.  A key component of the artistic persona he has constructed for himself is his image as a white pimp. In the Hard Rock Hotel and Casino in Las Vegas, a glass display case features a life-size replica of Rock in a full-length mink stole, walking cane and pimp hat straight out of a 1970s blaxploitation film.

Kid Rock is overshadowed in the misogyny sweepstakes by his more famous home-stater Eminem, who not only sells more records but also attracts a much greater level of cultural disapproval.  But Rock’s lyrics are similarly filled with hostility, resentment, and sexualized aggression toward women.  Consider the thinly-veiled threats of punitive sexual violence in Rock’s song F*ck U Blind.”

One wonders how Ann Romney—or Mitt, for that matter—would feel if one of their sons sang along with that particular song on his iPod. But the mainstream cultural legitimacy of Kid Rock—who wrote that song and many others like it—is enhanced every time his songs are played at Romney campaign events.

Purely on the superficial level of musical style and cultural taste, the Romney-Ryan and Kid Rock pairing seems like a forced political marriage.  But on further inspection, the Republican ticket and the white rock-rapper have a lot in common—especially their lack of respect for women.

Of course this lack of respect plays out differently for the Republicans than it does for the rock star.  For Romney and Ryan, women are not capable of making their own ethical and moral choices about their sexuality and reproduction. Instead, the two conservative Republicans who miss no opportunity to tout their love of “freedom” would have the state impose its will on women’s private health care decisions, fulfilling the authoritarian function played by the church in earlier eras (or in present-day theocracies such as Iran or Saudi Arabia).

Kid Rock’s lack of respect for women lies less in the realm of civil and human rights and more at the micro level.  He treats women as disposable objects of his sexual pleasure.  In interviews and public statements he repeatedly refers to women essentially as receptacles, defined solely by their body parts and ability to service men’s sexual needs.

Playing to the libertarian wing of the Republican Party

The political value of Kid Rock to Mitt Romney is obvious.  Rock brings an edgy rock and roll energy to the bland Mormon’s presidential campaign.  Romney is perhaps the least hip presidential candidate since Richard Nixon; he can only benefit — especially with a certain subset of younger white voters—from his unlikely association with an artist who produces albums with titles like Early Mornin’ Stoned Pimp.

Rock’s anything-goes persona plays well with the libertarian wing of the Republican base, which, unlike the party’s large evangelical bloc, is not determined to use state power to enforce right-wing Christian gender norms and sexual mores.

Rock is also useful to Romney because, although he grew up the son of an automobile dealer, his blue-collar image helps to create a cultural bridge to working-class white voters for the super-wealthy private equity manager, who has struggled to communicate a common touch or any kind of empathy with the lived experiences of working people.

It is understandable that the Romney-Ryan campaign would want to align itself with Kid Rock, but it is inexcusable.  As a society we are either committed to ending the sexual exploitation of women and children, or we are not. Mitt Romney can’t have it both ways.  He can’t plausibly claim to care about women and continue to benefit from the active and prominent support of a notorious misogynist who shamelessly exploits and denigrates women.