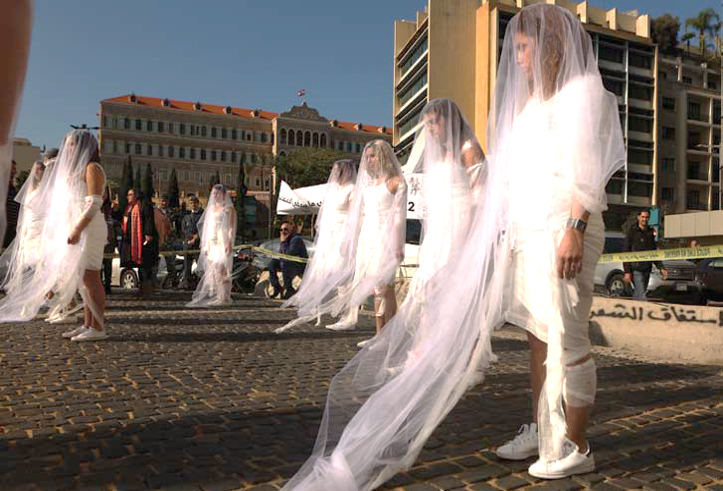 In Lebanon, rapists can avoid criminal prosecution provided they marry their victims. The law, originally introduced in the 1940s, was meant to salvage the “honor” of women who are raped. It was codified as part of the country’s penal code. In 2016, as part of the annual “16 Days of Activism Against Gender-based Violence,” the Lebanese gender justice organization ABAAD launched a campaign to abolish the archaic law. ABAAD, which means “dimensions” in Arabic, promotes sustainable social and economic development through equality, protection and the empowerment of marginalized groups, especially women.

Their campaign was called “A White Dress Doesn’t Cover the Rape.” In addition to agitating for a change in the law, the campaign aimed to both raise awareness that rape is a crime in any circumstance, and end stigmatizing rape victims in Lebanese society.

Central to ABAAD’s approach was creatively and holistically engaging all segments of Lebanese society. The initial step was a series of workshops with survivors of sexual violence entitled “Voice Matters.” These women determined the overall direction of the campaign, including its principal messages and slogans.

The campaign’s imagery is provocative and impactful. A video depicts a young abused women wrapping her injuries with white gauze until the gauze eventually forms a wedding dress—a chilling representation of the campaign’s tagline. ABAAD also used a variety of strategies to wake up the Lebanese public and the media, including groups of veiled women in gauze dresses protesting outside the Lebanese parliament; a flashmob at the Beirut marathon; and a football match with prominent media figures promoting the cause. In addition, the campaign used a number of community engagement approaches to mobilize public opinion around this issue, featuring local communities writing and performing stage plays on sexual violence. Throughout the campaign, those efforts were bolstered by intensive lobbying with politicians, changemakers and religious leaders. 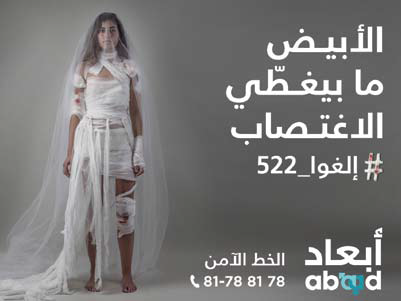 ABAAD’s campaign to overturn Lebanon’s outrageous rape law included posters like this one, reading: “A white dress doesn’t cover up rape. Abolish #522 (of the penal code.)”

Sinéad Nolan: Tell me about the timing of this campaign. Why did you decide to do it now, and why do you think you managed to have such success at this time?

Roula Masri: The timing of the campaign was really crucial. For the last two years in Lebanon, we have had no president and effectively no executive branch of the government. There has been a major movement proclaiming the parliament is not legitimate. In October we finally elected a president. This created momentum and a generally optimistic political atmosphere, across sectarian divisions. We seized the opportunity to launch the campaign. Another important factor was that is coincided with the 16 Days of Activism Against Gender-Based Violence. During this time, we generally receive a lot of attention from the press anyway so the combination of these factors was timely.

SN: How did you collaborate with other organizations for this campaign, and how did that affect the result?

RM: Laws like this affect every woman in Lebanon, including the many Syrian refugees here. As part of our strategy of engaging different communities we partnered with five NGOs working with Syrian refugees, to raise awareness about the law and mobilize refugee communities. We also reached out to all of the organizations we have worked with in the past, many of whom contributed technically and financially. Another key partnership was with the media. We made sure they didn’t just cover the campaign but were actively engaged as a partner. That’s how we were able to reach not only Lebanese media but also international media.

SN: What kind of opposition did you face? Anthony Keedi: No one was really against the campaign. We framed it in a way that ensured no one could oppose it. We focused on simplifying the message: this is rape, this is an atrocity that is being done to women in our country. It is being covered up and that is unacceptable. We made the images so provocative and made the sexual violence aspect so clear and undeniable that if anyone were to speak against it they would be endorsing rape. The timing was also ideal in terms of “16 Days.” The media and public got behind us so quickly that the opposition couldn’t come up with a strategy.

SN: How does this campaign tie in with ABAAD’s work on men and masculinities, and how were you able to mobilize men for this cause?

AK: Engaging men was pivotal to this campaign. That act of reaching out to politicians was very difficult in a political system with only 3 percent of women represented. We managed to get the support of many decision makers and religious leaders to speak up against the law on social media. While engaging men was important, the campaign wasn’t really about “masculinities” as some of our previous campaigns have been. We were shocked how quickly it became a national issue and how quickly votes were taken to repeal this law. We were planning strategies to work with young men and women in schools and communities and to involve men who have received our masculinities training using a social norms approach, but they are on hold now because of how successful the campaign was.

SN: What lessons did you learn from the campaign?

RM: One is that timing is crucial. If you have a good strategy at the right time you will be able to create momentum. Another was about partnership and participation. If we hadn’t included the main rights holders I’m not sure if it would have had the same impact. Instead of reinforcing the patriarchal idea that these women need protecting, we said, “These women have something to say. Listen to them.”

AK: We tend to look at a campaign as if it started and ended on a particular date, but really this was an extension of a much longer process. This was our first foray into legislative change. We just celebrated our five-year anniversary. In those five years, we have made an effort to speak to everyone: men, women survivors, politicians and religious leaders. Having these different strategies—never refusing to talk to any particular group, as many organizations have done—led us to have a much better standing with these groups. So, when the moment came for our first attempt at a campaign like this those five years really paid off. We had made a name for ourselves and many allies because of our past efforts to talk to everyone whether we agree with them or not. People were willing to sit down with us and talk about this law. Not only did they believe in what we were doing, but they believed in us and what we stand for. And, although it wasn’t a masculinities- oriented campaign, it was really a culmination of all the work we have done to engage men in the past. When the opportunity came to take a stance on legislation, all the male support we had been garnering for years, and all our male followers on social media, came into play. It is an example of how long-term engagement of men can really work.

SN: Do you have future plans to engage in policy or legislative change?

RM: The success of this campaign is still sinking in. We would love to continue working on legislation but timing is crucial so we are still unsure what our next opportunity will be.

AK: Part of our Theory of Change is that you need to work on the seeds of discrimination—which are gender norms—but also on creating policies and legislation that reflect the norms we would like to see in the world. It remains to be seen what we will work on next, but for the moment, this law is on its deathbed, and we are going to follow it until we bury it. ABAAD’s campaign to overturn Lebanon’s outrageous rape law included posters like this one, reading: “A white dress doesn’t cover up rape. Abolish #522 (of the penal code.)”

Sinéad Nolan is a program assistant at MenEngage Alliance. She recently graduated with a master’s degree in international development from King’s College London, where she specialized in gender and social policy in Latin America. She coordinated MenEngage’s collaboration with Voice Male on this issue of the magazine.