Writing October Mourning: A Song for Matthew Shepard has been a long journey, one that took me over 11 years and began with a terrible coincidence.

My journey began October 12, 1998, the day I flew across the country to give a speech about the controversy over my children’s book, Heather Has Two Mommies at the University of Wyoming, in celebration of National Coming Out Day. It was entitled “Heather’s Mommy Speaks Out: Homophobia, Censorship, and Family Values” and focused on the difficulties I had in getting my book Heather Has Two Mommies published, and how important it is for every child to see a family like his or hers reflected in a piece of literature. That was the day the world found out about the brutal murder of Matthew Shepard, the gay Wyoming college student killed in the most visible anti-gay hate crime in American history.

I imagined Matt Shepard, whose picture had been splashed all over the newspapers, sitting in the front row of the auditorium listening to my speech. I knew he had planned on coming to my lecture. I knew he had attended a meeting of the school’s Lesbian, Gay, Bisexual, Transgender Association to finish planning Gay Awareness Week the night he was attacked. I knew he had been robbed, kidnapped, beaten, and tied to a fence, where he remained undiscovered for 18 hours, all because he was gay.

That night I promised the people attending my lecture that I would do my best to make sure Matt was not forgotten. To this day, I open all my speeches on LGBT rights by honoring Matt’s memory. I tucked a photo of Matt inside my wallet, which I still carry with me wherever I go. I attended a lecture given by his mother, Judy Shepard, at the University of Massachusetts, and afterward I went backstage to greet her. Though I never met Matt, he has become an important part of my life, as he has for so many others.

In 2008 something happened that made October Mourning possible: I was appointed poet laureate of Northampton, Massachusetts, the community where I lived. This honor inspired me to focus fully on poetry, which has always been my first literary love. In the fall of 2009, I created a project called “30 Poems in 30 Days,” inviting the poets of my community to write one poem a day during the month of November to raise money for a local literacy organization.

And on October 12, 2009, the 11th anniversary of Matt Shepard’s death, something else happened that was crucial to the writing of my book: the play The Laramie Project: Ten Years Later (An Epilogue) premiered in 100 cities, including Northampton. The Tectonic Theater Project, whose members had gone to Wyoming shortly after Matthew Shepard’s murder to interview people and create a play called The Laramie Project had gone back to Wyoming 10 years later to interview the people of Laramie once more, to see what had and hadn’t changed. Their new play unleashed a wave of emotion in me, reconnecting me once more to Laramie, to Matt’s death, and to all I experienced in that grieving community.

When I got into bed that night, I couldn’t sleep. Instead, I picked up a pen and wrote the first draft of the poem “Wounded.” The next day I wrote “The Fence (that night).” When November arrived, I knew that my 30 poems would explore the impact of Matt’s death upon the world.

Always a morning writer, I found myself scribbling in the middle of the night. Thoughts of Matt left alone on the prairie for 18 hours kept me awake and inspired to write about his death from the imagined perspectives of the “silent witnesses” to the murder. I wanted the stars, the fence, and the wind to symbolically bear witness to the tragedy spawned by hatred, and to deliver a message of hope.

Yet something was missing. I didn’t know what it was, but I knew I had to travel back to Wyoming to find it. A few months later I flew to Denver, drove to Laramie, and visited the site where Matt’s murder had taken place.

As I walked across the prairie, the land felt spongy beneath my feet. Though it was April, there were still patches of snow all around. The wind was brisk and very cold against my face. The fence was solid under my hand. I said Kaddish, the Jewish mourner’s prayer, and placed a customary stone on the fence. Two hawks flew overhead. I stared at the sky, so big and open, and again wondered what it had witnessed that night more than a decade ago.

And on April 12, 2010, 11-and-a-half years to the day since Matthew Shepard died, I flew home and wrote the last poem of the book while soaring through the air. “Pilgrimage” takes its form from an ancient Navajo prayer and incorporates lines from Jewish, Christian, and Buddhist traditions. The poem allows readers to pay their respects to Matt; it also reminds readers of the great beauty of the world and conveys a feeling of hope.

It is my wish that October Mourning will carry that message of hope, born from a horrific act of violence, to readers of all generations: to those of us who are old enough to remember exactly where we were and what we were doing when we first learned of Matt’s murder, and, perhaps more important, to our youth who are not old enough to remember.

Those attending college this fall were only preschoolers when Matt Shepard was murdered. Those attending high school were younger or not yet born. But Matt’s legacy will live on, and I intend October Mourning to be a vehicle for that legacy, to help our youth remember the lesson of his life and death: That all of us, no matter how old, no matter where we live, deserve to be free to be who we are. Hatred ended Matt’s life, but love can unite us. 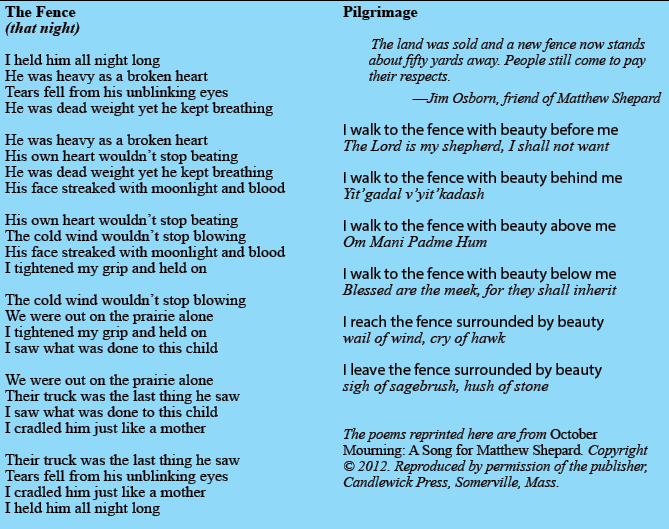 Lesléa Newman is the author of 60 books including: A Letter to Harvey Milk, Nobody’s Mother, Hachiko Waits, Write from the Heart, The Boy Who Cried Fabulous, The Best Cat in the World, and?Heather Has Two Mommies. A past poet laureate for Northampton, Massachusetts, she is currently a faculty member of Spalding University’s brief-residency MFA in Writing program.

An Interview With Jackson Katz 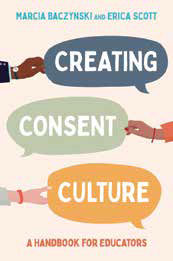