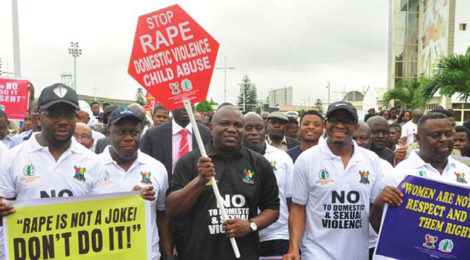 In Lagos, largest city in Nigeria, domestic violence and sexual assault cases have been on the rise. Perpetrators often seem undeterred. Responding to the menace, in September the Lagos State Domestic and Sexual Violence Response Team held a walk in both Ikeja and Festac Town, Lagos, as part of events marking Domestic Violence Month 2016.

The monthlong campaign had the themes, “Promoting positive masculinity” and “Men as flag bearers in the fight against sexual and gender based violence.”

Marchers walked from Ikeja down busy Awolowo Road to the governor’s office in Alausa Secretariat. Participants included students, workers, youth, business people and market leaders. Governor Akinwunmi Ambode addressed the marchers in his office and participated in the walk.

Governor Ambode said he was pleased with the initiative and commended the response team for organizing the walk, especially for “thinking differently” in its call to sensitize people to the issue, especially awakening men to promote masculinity in a positive way instead of using their homes to bully and perpetrate evil against women.

While emphasizing the rise of domestic violence, child trafficking, rape, and other heinous crimes against women, Governor Ambode challenged the public to be proactive and especially for men to be involved. He charged the Lagos State Task Force to track down offenders. The governor was said to have ordered the task force to apply necessary means available to track down offenders and also, in strong terms, mandated them to go all out and produce 11 culprits who will serve as scapegoats and a deterrent to others in the state.

(Editor’s Note: Efforts to reach the governor’s office seeking additional information about what to many appears to be a shaming approach to addressing the issue were unsuccessful.)

Previously, awareness and sensitivity drives have focused on women knowing their rights, standing firm, and protecting themselves. The Lagos State Domestic and Sexual Violence Response Team is pursuing a change in direction to effectively actualize and foster compliance toward women’s rights in the society. The head of the Directorate of Citizens’ Rights, Lagos State Ministry of Justice, and alternate chair of the response team, Omotilewa Ibirogba, emphasized the need for a change in direction.

“We have been fighting this criminality against children and women alone, although with visible results,” Ms. Ibirogba said. “Domestic violence, rape cases, sexual harassment including minors and aged women are on the increase. We can’t do it alone. That’s why we deemed it necessary now to involve men,” she said. “This year’s theme is focused on men to utilize their position to promote positive masculinity. We want men to be flag bearers in the fight against sexual and gender based violence in the society.” She urged anyone involved in perpetrating domestic or sexual abuse “to come to us for counseling.”

The month of awareness activities included a symposium on sexual and gender-based violence, a panel addressing Islamic perspectives on the issue, and ones on legal aspects, home and values.

A version of this article first appeared in Nigeria Today (http://www.nigeriatoday.ng/2016/09/produce-11-scapegoats-ambode-tasks-task-force-unit/).

What’s Missing in the Way We Look at Rampage Killings? 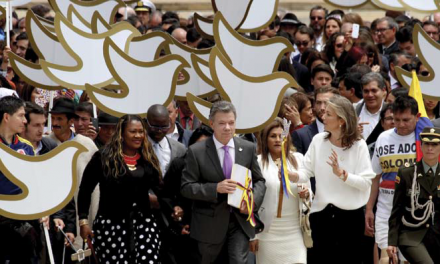