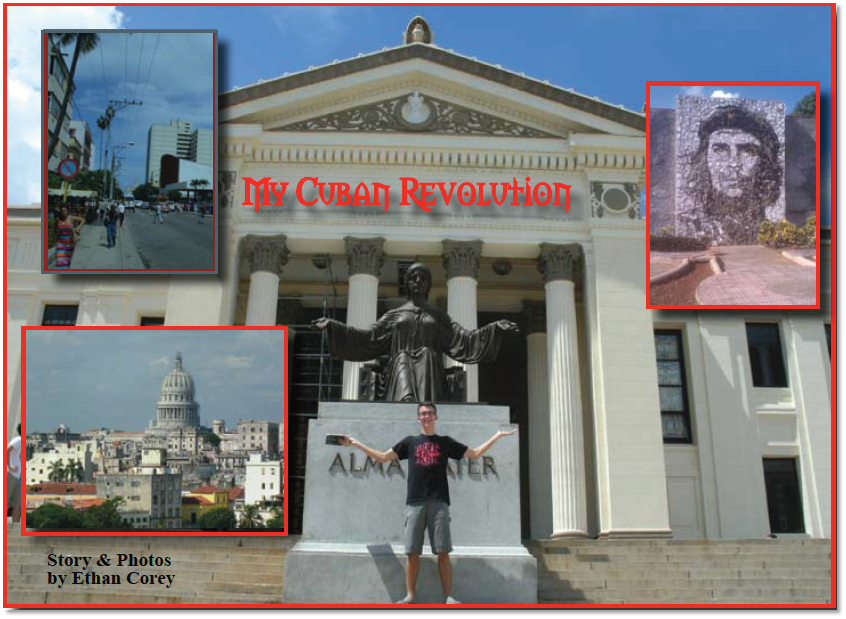 Although the distance between Cuba and the United States is less than 100 miles, step off the plane in Havana and you have entered another world. Flashy ads, new cars, new technology, and all the latest styles are absent from the landscape. You are surrounded by public art displays, political billboards, old American clunkers rolling tentatively down the street, people talking on hand-me-down phones and wearing used clothing. American excess replaced with Cuban thrift.

I traveled to Cuba last fall for a semesterlong study abroad program at the University of Havana hoping to understand a nation that has taken a different approach to address injustices, including many that still plague the U.S. Cuba has declared war on economic inequality, exploitation, racism, and sexism and set out to create a “new man” who would be able to escape the realm of economic necessity and enjoy real freedom. Yet, during my time there I ended up learning far more about myself than I did about Cuba.

Cuban reality exposed the tensions between my privileged identity, my ideals, and the world I inhabit, forcing me to confront my complicity in maintaining unjust power structures and to reevaluate how to go about changing them. My time in Cuba showed me that good intentions alone, and a desire for change, are never enough. Making real progress toward a more just future requires collective, not just individual action.

Most Americans think of Cuba as an insular, isolated island-remnant of the Cold War, closed off from modern society and the rest of the world because of its stubborn refusal to accept the new world order and open up to capitalism and liberal democracy.

In truth, Cuba has been rapidly evolving since the fall of the Soviet Union, struggling to adapt to new realities while maintaining key social achievements of its more than half-century-old revolution, including a world

-renowned universal healthcare program and high-quality, free education. Since the late 1990s, Cuba has been developing a vibrant tourist economy, investing in hotels, resorts, and other attractions to draw travelers from Europe, Asia, Latin America, and Canada seeking a relatively low-cost tropical vacation or a glimpse of the island’s rich history. While tourism has been essential for the country’s economy to rebound from the brink of collapse, it has also brought back many of the ills the 1959 Cuban Revolution sought to address.

Social inequality, segregation, and prostitution have all been on the rise since the late nineties as Cuba has increasingly catered to the needs and desires of foreign tourists. Cuba has drawn on its seedy past as a hotbed for gangsters, gambling, and other vices to entice hedonistic foreigners to the detriment of its own citizens. Portraying itself as a land of rum, cigars, and beautiful women existing only to please well-heeled tourists betrays its idealistic vision even as it is meant as a stopgap tobolster its fragile economy.

In many ways, privilege is a lot like the air you breathe. You might recognize privilege on an intellectual level, but it is so ingrained, such an essential part of your existence, that you don’t really notice it until something radically changes. Coming to Cuba was for me that radical change. In the United States, the majority of people I spend my time with come from backgrounds that, while not identical, are comparable with my own. Even people of other races, genders, sexual identities or socioeconomic backgrounds still share a large degree of commonality with me. As college students, most people we associate with are either in college or similarly educated, which in the U.S. implies a basic level of economic security. In Cuba that was rarely the case.

Although the Cuban government guarantees food, housing, education, and healthcare, most Cubans are still poor; the average salary of a Cuban worker is a little more than the equivalent of $20 each month.

What may seem like an insignificant sum to most

Americans is often mind-bogglingly expensive to a Cuban. Case in point. I was browsing in a bookstore with a few of my Cuban university friends when one of them found a book he wanted. His face lit up with excitement until he saw the price tag. “Oh,” he said,  shaking his head, “it’s way too expensive.”

After he put the book down and walked away, I glanced at the cover. To my surprise, the book, a heavy tome that would likely be sold at textbook prices in the U.S., cost less than $2.

I wasn’t the only one to notice the radical disparity between my background and that of the average Cuban. As a result of my appearance, my accent, and my speech mannerisms I was seen as an outsider. Of course, this “otherness” had nothing to do with marginality or a lack of power, just the opposite in fact. People confused me for a tourist. Whether I was walking down the street or eating lunch with friends, Cuban jineteros (hustlers) would try to sell me cigars, drugs, women, or anything else that would get money from my pocket to theirs. 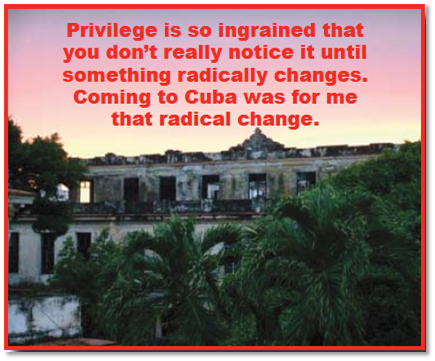 As a young Anglo man, people expected me to be looking for “ron, cigarros y mulatas” (rum, cigars, and brown women),” a neocolonial outsider who only wanted to consume and exploit a preconception I had to work to assuage in many of my interactions with Cubans. This was not so much a qualitative change in how I was perceived but a change in intensity. Traits hidden from view in the U.S. were visible in Cuba. Nothing new was really added-—the power dynamic in my relationships with Cubans still existed in my relationships at home; I was just more sheltered from it in the States.

While I worked to transcend others’ expectations, they nevertheless affected my behavior and attitudes more than I cared to admit. Hanging out on the malecón—a seaside boardwalk where young Cubans gather to drink, dance, and sing together in the evenings—with a few of the American women in my program and some of our Cuban friends, one of the men told me to tell “my women” to go buy us a bottle of rum.

Shocked, I didn’t know what to say. While I found the idea of ordering “my women” to do anything sexist and distasteful, I didn’t want to antagonize our new friend. I was worried the language barrier had caused me to misunderstand his request. I played dumb, looking at him quizzically and asking him to repeat himself several times. Finally he got fed up and “solved” the problem by having “his women” buy the rum. The idea that women are men’s to possess is so deeply rooted in so many aspects of Cuban culture that I had to temporarily abandon my profeminist ideals time and again just to function in Cuban society. For example, if I was ordering food at a cafetería with a female member from my group, I would often be expected to order for “my woman”; otherwise the cashier would assume she wanted nothing. If I was walking down the street with a female friend or we were out at a bar, I would often have to assume an air of possessiveness to ward off unwanted harassment from other men. Despite the fact that I took on the accoutrements of traditional masculinity out of concern and care for my female friends, I noticed it was affecting me—I found myself starting to look at my friends as “my women.” As you can image, that disturbed me.

Ultimately, I realized I had been approaching my situation the wrong way. I had become more concerned with proving I was a student change agent working to promote a better world rather than the porcine tourist many Cubanos may have seen me as. I had started looking at foreigners on the street judgmentally, silently listing all the ways I wasn’t like them. I was patting myself on the back for not sleeping with prostitutes and being polite and friendly to waiters and cab drivers instead of focusing on what I could do to actually make a difference. No matter how polite and respectful I was or how many prostitutes I didn’t sleep with, nothing could change the fact that I was fundamentally similar to the tourists I scorned. Why?

Unlike most Cubans, I was in their country by choice even if I wasn’t staying in a luxury hotel or eating in lavish restaurants. Like tourists at the end of their vacation, I was still going to return to my privileged life in the U.S. once the semester ended, and nothing I did (barring a Cold War–style defection) could  change that fact.

My admirable intentions could do nothing to resolve the inherently contradictory nature of my position; no matter what choices I made, for better or for worse, I could not eliminate the sharp differences in power and opportunity between my Cuban friends and me. My experiences taught me that a commitment to social justice and profeminism alone couldn’t save me from perpetuating the very systems of oppression I oppose. In fact, they had stymied my efforts by paralyzing me in a solipsistic ethical deadlock—I had become more concerned with the impossible task of living up to my ideals than actually working to make the world a better place. To really make meaningful change I needed to shift my perspective. I needed to focus on working with others to address injustices that implicate all of us instead of worrying about proving that I was one of the “good foreigners.” What I came back from Cuba realizing is that if I want to help bring about a more just and egalitarian world, I need to link my personal, inner revolution with the collective outer transformation of the world—the great turning—happening on every continent. A true commitment to social justice is a collective effort, always bigger than any individual.

Ethan Corey is a student-journalist in his third year at Amherst College. He writes for several student-run publications and plans to pursue a career in journalism after he graduates. He was an intern at Voice Male in the summer of 2013.