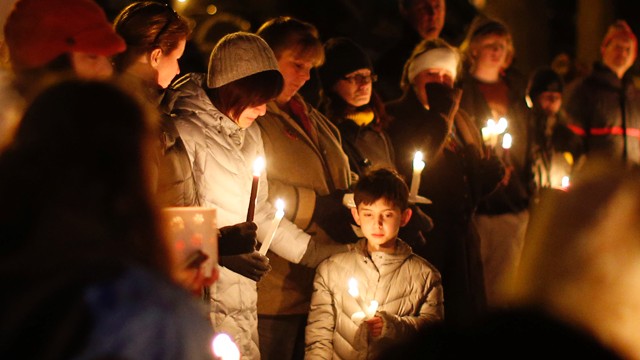 There’s something happening here
What it is ain’t exactly clear
There’s a man with a gun over there
Telling me I got to beware
I think it’s time we stop, children, what’s that sound
Everybody look what’s going down

“For What it’s Worth,” by Stephen Stills (Buffalo Springfield, 1966)

In the wake of Adam Lanza’s murderous rampage, men in particular, must not stay silent. There’s an epidemic in our “man culture” we can ill afford to locate on the periphery, ceding center stage to the narrow gun control debate.

It’s encouraging that there’s momentum in Congress to reinstate the ban on assault weapons that expired in 2004. Let’s not miss the opportunity though, to enlarge the national conversation about guns to centrally include how we raise boys and how we address the mental health crisis among too many men. And we must pull back the curtain of denial about mainstream culture’s “patriarchal masculine obsession with control,” as sociologist Allan Johnson puts it, control “that defines ‘real’ manhood in this culture, with violence being merely its most extreme instrument. It is that control that links all men with the violence that only some men do.”  As Johnson, author of the acclaimed Gender Knot: Unraveling Our Patriarchal Legacy notes, “When U.S. drones kill children, the act springs from the same patriarchal roots as the mass murder in Newtown.” An inconvenient truth we cannot ignore.

How many more lonely, alienated, disconnected, (usually) white males perpetrating murder and then committing suicide need we see before admitting the irrefutable fact that the shooters are all male? From police detectives to forensic psychologists, anyone studying mass killings in the U.S. over the past two decades cannot ignore that fact.  Still, too many, including much of the media—continue to under-acknowledge this achingly obvious truth. Is it because they don’t see the killers’ gender, just as fish don’t see the water surrounding them? A Mother Jones review of the 62 mass murders in the U.S. since Columbine in 1999 revealed males committed 61 of them.

Absolutely, let’s continue the gun control conversation. Let’s not kid ourselves, though; it’s the masculinity, people.  “The whole gun debate needs to be infused with a discussion about manhood,” says Jackson Katz, longtime men’s antiviolence activist and author of The Macho Paradox and Leading Men. “It’s frustrating to hear debates about gun rights vs. gun control, and yet very few people say what’s hidden in plain sight: it’s really a contest of meanings about manhood. Of course there are women who own and love guns; Adam Lanza’s mother was one of them,” Katz notes. But the NRA and its allies have defined “the gun as a symbol of men’s potency and freedom…”

An advertisement for the Bushmaster AR-15 type semiautomatic, the type of gun primarily used by shooter Adam Lanza during his rampage.

We need a broader set of measures to define manhood. Let’s begin by cultivating boys’ emotional intelligence, making is as high a priority as is teaching math and reading. Men of conscience across the country: It is time to speak out—as fathers and mentors, coaches and clergy members, teachers and community leaders. Among our first acts must be to take away the stigma of men undergoing psychotherapy.

Now is the moment for gun control advocates and those working to redefine masculinity to join forces, to create a new coalition that recognizes the irrefutable, longstanding relationship between men and guns, men’s mental health, and men and power. We can no longer ignore the underreported cases of men’s depression and aversion to mental health check ups (all health check ups, for that matter). Too many men are at risk to themselves and others; their pain masked by a toxic rage. Nor can we turn a blind eye to a society that venerates violence—from shoot-‘em-up movies to kicking Afghani butt. We reap what we sow. Sadly, our thirst for dad’s blood and guts has always trumped our love of mom’s apple pie.

At the darkest time of the year in many parts of the world, people have been awaiting the return of the light.  Let’s not squander this opportunity. We need to come together as a country not just to begin to heal but to begin to change, to turn away from teaching our sons to glorify violence, even as we know how difficult it is to definitively attribute mass killings to any one factor. That’s not the point. How we socialize males is.

This is a perfect moment for Warren Buffett and Bill Gates to lead a call for the wealthiest one percent in the nation to take the lead in launching a national program to train early childhood education and care providers, prekindergarten, and elementary school teachers, to create new lesson plans that emphasize boys’ emotional wellbeing.  And, let’s put men’s mental health on the docket, too, beginning by asking the president to charge the CDC with coordinating a national campaign to raise awareness about mental health and males, focusing on creating treatment plans tailored to reach resistant males.

We are heartsick at the unfathomable murders of 20 innocent children and six dedicated staff members killed at their school, as well as the murderer’s mother, Nancy Lanza. We have 27 reasons to come together as a nation to honor their memories. The families of the dead will soon be asking: What are we waiting for?

Note: This article has been edited for typos since its original publication.

Voice Male editor Rob Okun can be reached at rob@voicemalemagazine.org 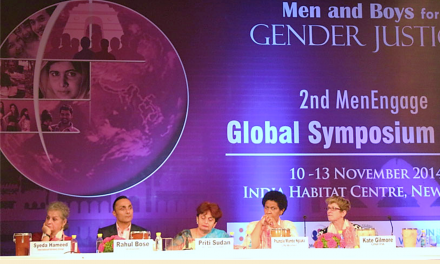