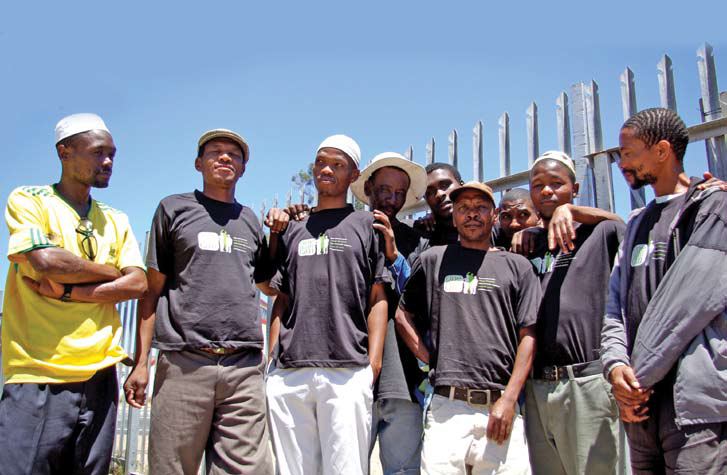 In South Africa, every six hours a woman is killed by her intimate partner. To say that gender-based violence is a problem in the country is a gross understatement. Its roots are woven into the country’s historical struggle to end apartheid, its ongoing economic insecurity, and the global system of patriarchy. And, to make matters worse, the men who commit gender-based violence, especially men of influence, are rarely held accountable.

On August 6, during a report on the 2016 municipal election results, four young women staged a silent protest directly in front of Zuma, head of the African National Congress (ANC). Their statement? A call of remembrance for the courage and injustice endured by a woman called “Khwezi” by the media, who accused Zuma of raping her in 2005. Zuma was acquitted at trial, staunchly claiming that what happened was a mutual encounter. Despite her vehement objection—and her identity as a lesbian— Khwezi, fearing for her safety, went into exile in the Netherlands where she was granted asylum. While there, she wrote and performed a powerful poem that reveals her perspective on what happened.

Among the signs protesters displayed were ones reading, “I am 1 in 3” (statistically, one in three women globally will experience physical or sexual violence, mostly by an intimate partner, www.unwomen.org/en/what-we-do/ending-violence-against-women/ facts-and-figures); “10 years Later,” “Khanga” (A khanga is a wrap-around dress, a garment Zuma claimed he interpreted as an invitation for sex), and “Remember Khwezi.” After the forceful removal of the protesters, the Independent Electoral Commission (IEC) issued a formal apology, not for the abuse suffered by the student activists, but for the disturbance to the president and to the audience.

Then there’s the murder case of political leader Patrick Wisani. The former ANC Youth League official allegedly beat to death his girlfriend, 24 year-old Nosipho Mandleleni, in September 2015. He was released on bail 16 days after his arrest. Earlier this year, the bail was revoked after he was charged with two counts of assault: he allegedly intimidated two witnesses, including Mandleleni’s twin sister. The judge appointed to the trial struggled to take the case seriously, confused about facts, witnesses, and the sequence of events. Wisani’s scheduled court date in September was pushed back to later in the fall when he was taken to the wrong court and his lawyer never appeared. Activists who came to court to protest against Wisani are expected to return when the case resumes.

Where is power located?

It can seem that men’s abuse of women, especially that of high profile men, casually comes and goes, something communities seem to resign themselves to, perhaps in hopeless frustration and in some cases in support. It might appear hopeless to challenge this system, considering that South Africa has one of the highest rates of rape in the world.

However, research conducted by South Africa’s Sonke Gender Justice, which works to prevent gender-based violence and HIV, shows a growing number of men are concerned about gender-based violence in their communities and want to be part of positive change (preventgbvafrica.org/wp-content/uploads/2013/11/Introduction_

Sonke responded to these findings with programs such as the UN-sponsored One Man Can (OMC), which supports men’s convictions that a more equitable world is possible, and the recent Safe Ride Campaign, which strives to prevent abuse of women and girls at the hands of taxi drivers and queue marshals.

“It is exciting to see the number of young men who have stepped forward recently as active allies,” said one of Sonke’s founders, Dean Peacock, addressing men’s engagement. “They are making clear their dissatisfaction with traditional gender roles and their opposition to sexual violence.”

One Man Can was established in 2006, the same year that Zuma was acquitted of rape. The program conducts workshops, produces videos, and uses drama, song, sport, art, marches and other forms of activism to reach men. Denise Robinson, Democratic Alliance Women’s Network leader, advocates that while empowering women to move beyond barriers of sexism is crucial, “male entitlement is something we need to work on, and it needs to involve men and not just women.” OMC creates space not only for prioritizing the voices of those victimized or silenced by violence, but also for calling into question—and transforming—disastrous gender-based expectations and the men who sustain them.

With its One Man Can Tool Kit (comminit.com/global/content/one-man-can-campaign), OMC provides information and strategies on how to “support a survivor; use the law to demand justice; educate children; and challenge other men to take action,” just to name a few.

Sonke’s research revealed that in the weeks following participation in One Man Can activities, 25 percent of respondents sought voluntary counseling, 50 percent reported an act of genderbased violence, and more than 80 percent talked to friends or family members about gender issues.

According to Global Health Action, South African health policies formulated over the last 20 years are addressing violence; however, such policies often fail to be effectively implemented. Reinforcing the problem are men of influence, such as Zuma and Wisani, who prioritize patriarchal entitlement over women’s right to their lives and freedom. Campaigns like One Man Can and Safe Ride are crucial in disrupting and transforming masculine norms that so often lead to violence. What is needed now are development and marketing efforts for these programs to move toward a critical mass of gender justice advocates.

The effect? Voices of political leaders clinging to male entitlement arguments would be drowned out by a chorus of One Man Can campaigners, reformed taxi drivers, and peaceful antiviolence protesters raising their voices for gender justice.

Voice Male administrator Amanda Pickett works to promote men’s “aha” moments, those times when it becomes clear that a) gender inequality is a pervasive and complex social problem, b) we are not alone in our discomfort with and eagerness to transform gender inequality, and c) we can do something. She holds a master’s in gender and cultural studies from Simmons College in Boston.