Men Saying No to Violence Against Women 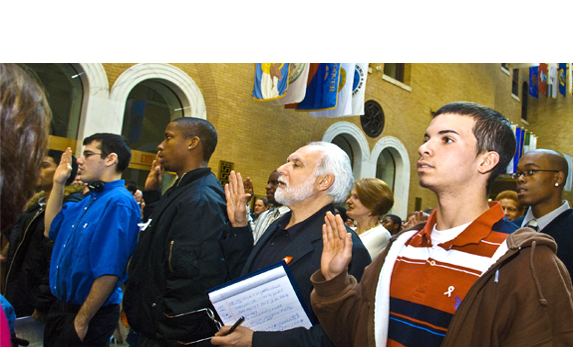 Men promoting gender equality and decrying violence against women is “suddenly” the next new cause. Except it’s not. The issue is, though, finally getting some sustained media attention. That’s good news.

Consider: the international movement of men supporting women’s equality and the transformation of conventional expressions of manhood held a global symposium last November in India. It was attended by 1200 people from 94 countries. A follow-up conference of more than 700 from dozens of countries begins next week in New York.

In Massachusetts the work is decades old—from a batterers’ intervention program in Boston in the late 1970s to an antiviolence men’s center in Amherst founded in 1982. On March 5th at the statehouse in Boston, the Men’s Initiative for Jane Doe, Inc. celebrated the eighth annual White Ribbon Day, centerpiece of a decentralized, months-long campaign across the state championing men as ambassadors of peace in the home and the community.

Rallying around a men’s pledge “to be part of the solution in ending violence against women,” men and young men have been invited to join White Ribbon Day cochairs, David Sullivan, Northwestern (Massachusetts) District Attorney, and Peter Roby, director of athletics at Boston’s Northeastern University. Their goal is to have men say no to men’s violence and yes to reimagining manhood.

“I want to reach out to as many people as possible about sexual and domestic violence and how the White Ribbon pledge can raise awareness,” said DA Sullivan,. who has a long history of speaking out against domestic violence.

Roby and the Center for the Study of Sport in Society at Northeastern were instrumental supporters of the Mentors in Violence Prevention program (MVP) at the school two decades ago. MVP trains student athletes and others how to move from passive bystander to active agent of change in the face of sexual violence and domestic abuse. Today Roby says it is critical “to engage my sports colleagues in a coordinated effort to end this epidemic and make our community safe for everyone regardless of gender.”

White Ribbon Day is an outgrowth of the international White Ribbon Campaign (WRC), created by a handful of Canadian men in 1991 on the second anniversary of the mass killing by a lone gunman of 14 women engineering students at a college in Montreal. They began the campaign to urge men to speak out against violence against women. Today, the WRC is in 60 countries and has collected more than five million pledges.

As in a growing number of communities, in western Massachusetts, men joining the pioneering efforts women have led to prevent domestic violence and sexual abuse continues to evolve. For instance, in western Mass., men serve on the boards of directors of Safe Passage in the city of Northampton and New England Learning Center for Women in Transition (NELCWIT) in Greenfield.

“Every community is affected by these issues and has a role to play,” the White Ribbon Day coordinator Craig Norberg-Bohm explained. “This year’s approach celebrates positive masculinity, invites men and boys to be leaders to help end violence against women, and to reimagine the idea of manhood.”

Domestic violence, sexual assault, and human trafficking are toxic expressions of a brand of masculinity campaigns like White Ribbon Day are designed to root out. Those of us who are fathers and grandfathers, husbands and sons, uncles and brothers, have a responsibility to leave the sidelines now. We can ill afford to cede a single yard to abusive men, whether wearing an NFL uniform or a suit and tie. How we imagine and value manhood today will determine how we redefine masculinity tomorrow. As DA Sullivan has said, “I hope the many voices of our pledge ripple through our schools, workplaces, and communities to clearly say as men we will never condone or tolerate violence against women.”

Rob Okun of Amherst is editor of Voice Male (www. voicemalemagazine.org), a national magazine chronicling the global antisexist men’s movement, and cochair of the board of the Men’s Resource Center for Change. He can be reached at rob@voicemalemagazine.org.