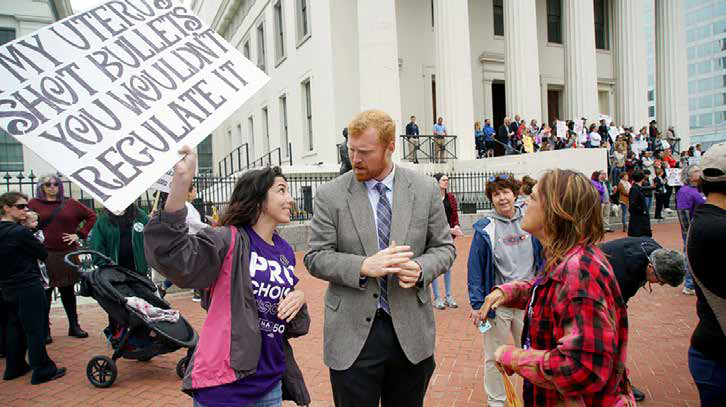 One of the key organizers of the Women’s Marches for Reproductive Rights, Rachel O’Leary Carmona, described the marches—catalyzed by the September 1 implementation of the draconian anti-abortion law in Texas—as a coalition effort. “This is not just a women’s issue,” she said. “It’s a racial justice issue. It’s an immigration issue.”

It is also a men’s issue.

The movement for reproductive rights has been long led by a multiracial, multiethnic collective of women. The vast majority of passionate activists are women. But men have a vital role to play.

For the past half-century, many of them have supported women’s right to choose, both in their private lives and at the ballot box. Some have donated money. Some have participated in public demonstrations, including the historic Women’s Marches in 2017 that were attended by hundreds of thousands of men.

Many others have provided personal assistance and care for women close to them who have experienced unintended pregnancies and needed access to a full range of options for medical care and services. But nowhere near enough of us have made this issue a priority.

In an open letter to men that was published after the state of Alabama passed a harshly punitive abortion law in 2019, Democratic New Jersey Senator Cory Booker acknowledged that women were at the forefront of fighting efforts to roll back their hard-won rights, “just like they have (been) in every single struggle for freedom in our country’s history.” As for men, he wrote, “It’s on us to listen, to speak out, and to take action. Not because women are our mothers, sisters, wives or friends—but because women are people. And all people deserve to control their own bodies.”

During the 2020 election, many political analysts said that prochoice women, outraged by the abortion ban legislation then sweeping through state legislatures, would be an important political force, perhaps more than in any single previous presidential election. But the idea that threats to women’s reproductive freedom are also an issue for men was only mentioned—if at all—as an afterthought. This has to change. 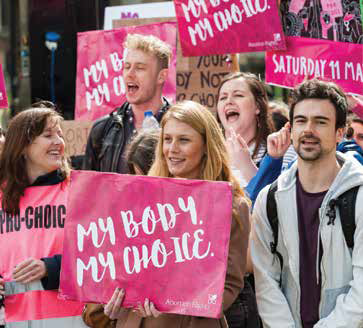 Moderate, liberal and progressive men who claim to care about gender justice need to get the message loud and clear that support for women’s and everyone’s right to comprehensive health care services—which includes access to safe, legal abortion—must move to a much higher place on their political agenda. Because without this right, there is no gender equality. And without gender equality, there is no real democracy.

Yet, as Sen. Booker argued, “Abortion is not something that many men feel the need or desire to talk about—it’s too uncomfortable. But that’s a trap—and one we need to get out of immediately. Men need to acknowledge that they benefit from abortion rights and reproductive health care, too.”

Much will be written in the coming months and years about the role of men in the movement, especially as a new generation of women, men and others across the gender identity spectrum become engaged in a cultural and political struggle that too many people naively thought was already settled. Inevitably, many men who are new to all of this will ask: “What can I do?” The good news is they don’t have to start from scratch. Many people have been thinking, writing and debating this question for more than 50 years.

There is already a body of scholarship, journalism and autobiographical reflection about some of the ethical as well as political complexities of men’s engagement with this topic. One of those complexities is the private nature of many women’s experience of abortion. Although according to the Guttmacher Institute, approximately one-quarter of American women will have an abortion by age 45, most of them keep this to themselves or within a close circle of intimate family members and friends.

As a result many men who have been involved in abortion decisions rightly hesitate to share and/or discuss this information with their friends, much less in more public venues. But many men have been through the experience. According to a 2011 multinational survey by Promundo, an international gender equality organization, between 40 and 90 percent of women said their male partner was involved in their decision to terminate a pregnancy.

While the researchers noted that not all of this reflected positive involvement by male partners, it is clear that tens of millions of men have participated in some way in a woman’s decision to have an abortion—meaning the issue is intensely personal for many men, as well as women and non-binary people.

I helped to organize an abortion speak-out for prochoice men in Boston more than 30 years ago as a way to give some of them a voice. The event featured a line-up of men who shared their stories in a way rarely heard in public discourse. They included the wrenching testimony of a man whose wife had died after she was rushed to a nearby emergency room with dire pregnancy complications, but doctors at the Catholic hospital refused to perform an abortion to save her life.

That story was similar to a tragic case in 2012 in Ireland, when Savita Halappanavar, a 31-year-old Indian woman living in Galway, died of septic miscarriage after doctors refused to perform a life-saving abortion. Her needless death helped to catalyze a women-led movement that resulted in the 2018 repeal of Ireland’s restrictive abortion law. Halappanavar’s husband and father both played influential roles in the repeal effort by making powerful public statements about Savita’s death and urging repeal of the law to prevent further preventable tragedies.

Beyond the understandable reluctance of many men to talk publicly about their experiences with abortion—unless expressly authorized to do so by the women in their lives—the very language we use to talk about pregnancy erases men’s participation— and thus their share of the responsibility for any outcome.

For example, too often we hear the question, “How many teenage girls got pregnant last year?” rather than, “How many men and boys impregnated teenage girls?” Switching from passive to active language would go a long way toward reframing the issue of unintended pregnancy as one in which men are actively involved, rather than silent onlookers, if not altogether invisible.

Finally, men’s participation in the movement for reproductive justice needs to include a focus on men’s responsibility to speak out about some men’s abusive and violent behaviors toward women that surround pregnancies and people’s responses to it. This includes reproductive coercion, which refers to men employing various types of interference with a woman’s autonomous decision-making with her reproductive health, such as birth control sabotage, or pressuring a woman to have or not have an abortion. It also includes inflicting physical, sexual or emotional abuse on a partner, pressuring or forcing a woman to have sex, and refusing to wear a condom or use other male birth control methods.

Although the Texas abortion law is shockingly regressive, it is only supported by a minority of people in the US. Nevertheless, for the prochoice majority, it should be clear by now that until this moment, men have not done their fair share in ensuring women’s basic reproductive freedoms. Women should not have to bear the brunt of fighting for their basic rights alone, even more so when men are—by definition—directly involved before, during and after the moment of conception.

Jackson Katz, a longtime member of Voice Male’s board, is internationally known for his pioneering scholarship and activism on issues of gender, race and violence. He is cofounder of Mentors in Violence Prevention (MVP), one of the longest-running gender violence prevention programs. With Media Education Foundation, he created the award-winning Tough Guise educational documentary series and The Man Card: White Male Identity Politics from Nixon to Trump (themancardmovie.com). A version of this article appeared in Ms. magazine’s blog. 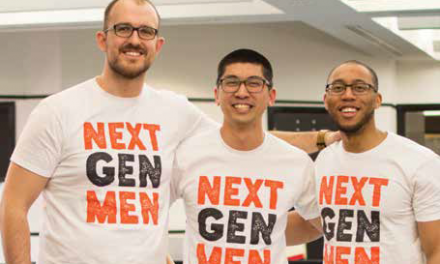 The Birth, Growth, and Future of Next Gen Men 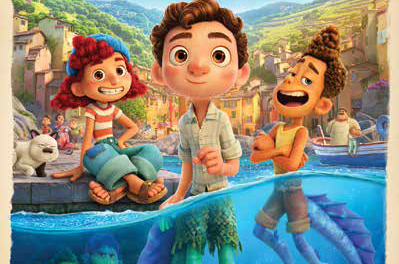