Men and the Masks They Refuse to Live With 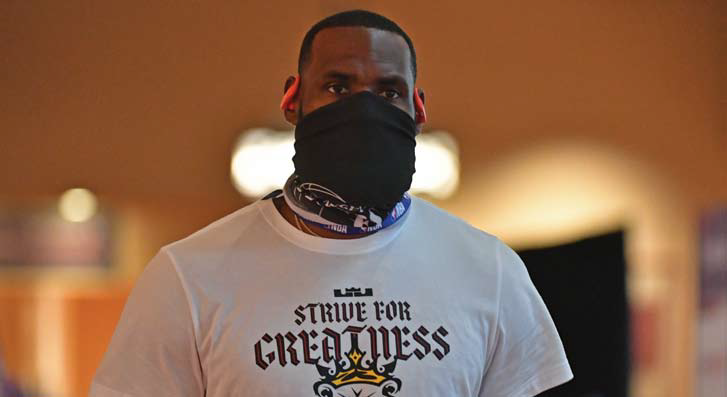 “Fellas, is it gay to not die of a virus that turns your lungs into soggy shells of their former selves, drowning you from the inside out? Is wearing a mask to avoid death part of the feminization of America? Is it too emasculating to wear a mask to protect others around you? Does staying alive make you feel weak? According to many American men, yeah.” So wrote journalist Alex Abad-Santos in a piece in Vox recently.

In reviewing poll after poll through midsummer, he found that far fewer U.S. men were likely to wear masks than were women. What follows is an edited version of his article.

For months health experts and medical professionals have stressed the importance of wearing masks, as more and more research has found that the virus spreads through face-to-face close contact like talking, sneezing, and coughing. As US cases and deaths continue to rise, scientists are finding that men are more likely to die from Covid-19 and still do not know why.

Attempts have been made to make masks aesthetically more stylish, more age-appropriate, and more sustainable in a hope to appeal to the maskless and change their ways. Sports heroes like LeBron James and Mike Trout have been photographed playing with masks on. And when Donald Trump finally wore one in public in July, his supporters rushed to praise him. (Nevertheless, in the following weeks he was never again seen donning a mask.)

Still, some see masks as weakness, and men, regardless of politics or race or sexuality, don’t like being seen as weak. This virus can’t do pushups or race cars, so the usual displays of dominance are meaningless. Instead, it can best be battled by, of all things, putting on little cloth accessories. 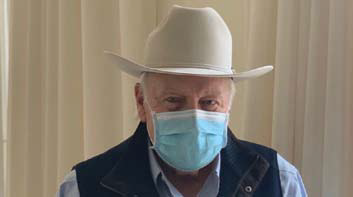 The coronavirus has issued an undeniable taunt to American men on their home turf, and some have chosen to prove their virility through risk with no foreseeable reward. It’s a narrow vision of manhood that ignores other tropes like self-sacrifice and being a protector. Performative masculinity for an audience of one puts many more people at risk. The solution would be so easy, if it weren’t left in the hands of the so-called manliest men in the country.

Americans can tell you how the coronavirus has completely changed their lives. From buying habits to social gatherings to commuting (or not) to the way we work out, the pandemic has altered our day-to-day existence. But not everyone’s behaviors have changed the same way.

The personal difference, experts say, comes down to how we respond to threats and stress. In crises, humans go into fight-or-flight mode, and we rely on our instincts. Those instincts tell us whom to listen to, which messages are important, and whose behavior to emulate. That notion about being sensitive to important messages and signals is central to why certain men are more likely to go against health directives and not wear a mask.

“The notion is masculinity is a status that you constantly have to prove,” Peter Glick, a Lawrence University professor and senior scientist at the Neuroleadership Institute, told me. Glick specializes in overcoming biases and stereotyping. “Any sort of stumble is perceived [as you losing your masculinity]. So if you do have a stumble, then you have to reestablish it. And if you perceive a mask as ‘Oh, I’m scared of this little virus’—that’s weakness.” The phenomenon is called “precarious manhood,” a term coined by Joseph A. Vandello and Jennifer K. Bosson, researchers from the University of South Florida.

In their research, they found that men experience anxiety when it comes to their manhood and masculinity, or masculine gender identity. Vandello and Bosson posit that this is because masculinity, or what society thinks is “manly,” is something that’s hard to achieve and easily lost. And when masculinity is slighted, men compensate by acting out in risky ways.

In the US specifically, American culture has a history of framing disease as an individual battle or competition in which there are victors and losers, triumph and defeat. Right-wing pundits and Republican lawmakers turned masks into a political issue, often framing masks as a slight on manliness. Gestures like Vice President Mike Pence’s maskless visit to the Mayo Clinic in April and actions like Trump calling Dr. Anthony Fauci’s credibility into question strengthen the mask-is-weakness connection. Especially among men who see Trump as a leader they want to emulate.

“Trump even kind of made fun of people who are wearing masks, right?” Glick said, referring to Trump’s mockery of Joe Biden wearing a mask. “In those situations where your masculinity is called into question, the question is embarrassing. And ostracism is extremely powerful. Embarrassment, ostracism—that’s what keeps us in line with social bonds.” 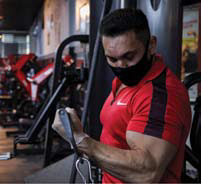 Sardar Ismail, an Iraqi Kurdish bodybuilding world champion, trains at a gym in a mask.
Photo by Safin Hamed/AFP via Getty Images.

Glick’s analysis lines up with research that people with sexist attitudes are less likely to take precautions against the virus. Tyler Reny, a postdoctoral research fellow at Washington University in St. Louis, found this by combing through data from the Democracy Fund + UCLA Nationscape project, a public opinion survey that’s been interviewing more than 6,000 Americans about the virus per week since March 19. “Those who had more sexist attitudes were far less likely to report feeling concerned about the pandemic, less likely to support state and local coronavirus policies, less likely to take precautions like washing their hands or wearing masks, and more likely to get sick than those with less sexist attitudes,” Reny said. “What I found is that sexist attitudes are very predictive of all four sets of [aforementioned] outcomes, even after accounting for differences in partisanship, ideology, age, education, and population density.”

There’s no set-in-stone rule that facemasks are a sign of weakness. Masks and masculinity existed separately long before the pandemic. Health officials have also consistently said shame doesn’t work to get people to change their behavior for the better. Yet the triggers of shame and slighted masculinity are so effective in getting people to abandon advice that could save their lives. So why, then, does shame work to deter men from wearing masks? It could be that men are more invested in their own masculinity than in their community.

Shaming people who don’t wear masks “doesn’t have the same power,” Glick said. “Are those people really experiencing shame? I don’t think they’re ashamed about their behavior. Shame is something you have to buy into.”

Alex Abad-Santos is a senior culture and entertainment reporter at Vox where a version of this article first appeared.

There’s an entire industry to masculinize inanimate objects to make them “worthy” of men using them. “War Paint” is makeup specifically branded for men. So were Kleenex’s “Man-Size” boxes and “Brogurt,” a yogurt for bros, before being rebranded after public mockery. And the Dude Wiper 1000, according to its semi-ironic, tongue-in-cheek website, “is not some ordinary bidet attachment,” as it has “blasters” to clean even the manliest of butts.

Going by capitalism’s penchant for man-plifying objects and knowing about men’s fragile relationship to their masculinity, it would seem that the obvious way to get more men to wear masks would be to make the manliest version of a mask possible. Maybe put guns on them, or a football team, or make a mask that makes men feel like a super-soldier spliced from Rambo and Captain America.

You can see the effect in sports and athletic wear, where companies like Nike and Under Armour are making masks that superheroes might don. They’re sleeker, curved like shark fins. In June, Under Armour launched its Sportsmask, which it promised would “reinvent” the facemask for athletes. The Nike Strike Snood, which kind of makes the wearer look like Bane or a ninja, is sold out. GQ’s pick for masks includes one that makes you look like “you’re in Mortal Kombat.”

For men concerned with masculinity, the appeal is for masks not only to look cool but also to allow you to do masculine things like run faster, lift heavier, and be stronger. At the same time, in Asia, designers are incorporating new tech and fashion into their masks. But according to health officials, appealing to consumerist impulses isn’t the best way to change men’s, or anyone’s, behavior.

Glick and Reny echoed a sentiment that health experts say: To get people to change behavior, masks have to become a socially accepted norm. Once people start accepting masks as normal behavior, like they do wearing seat belts and not smoking indoors, the number of people going against the norm decreases.

Getting to that tipping point is a lot easier said than done. Laws and mandates that the government used in the past in regard to seat belts and smoking took time for everyone to adjust to—time we don’t have due to how fast the coronavirus is spreading in the US. And while experts say people are likely to emulate behavior they see from leaders, Republicans like Trump and Pence haven’t consistently modeled good mask behavior or messaged how important they are to our health.

“So a good start would be to have stronger repeated signals from elites (particularly Trump) on the importance of mask-wearing as an easy and cheap way to slow the pandemic,” Reny said. “Having publicly ‘tough’ men (actors, athletes, some musicians) and other Republican elites also join in and wear masks would help.”

There’s evidence of this working.  Former vice president Dick Cheney’s daughter posted a picture of him wearing a mask with the hashtag #RealMenWearMasks. 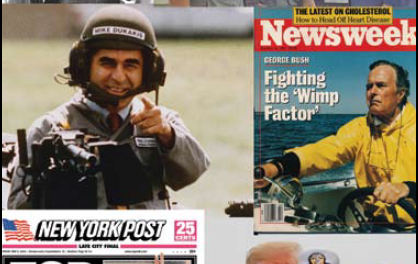 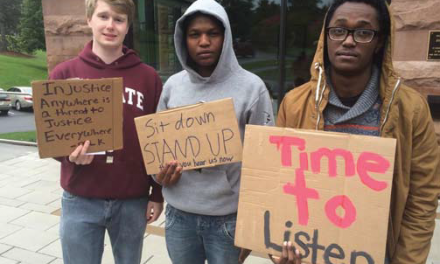 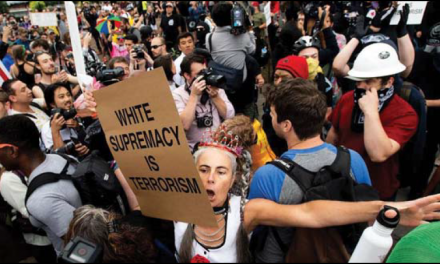