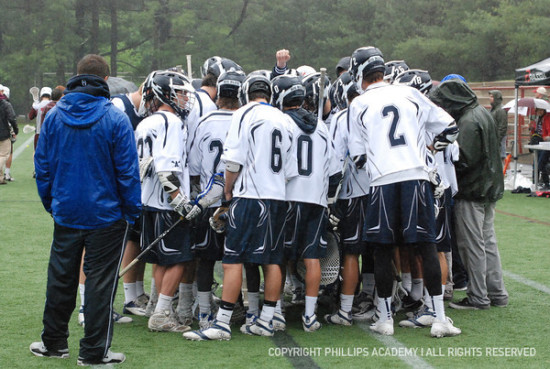 In a world where too many men stay silent in the face of discrimination against women—from sexual harassment to domestic and sexual violence—the public statement of a chorus of young Massachusetts male athletes not long before Father’s Day offers a sliver of new hope.

Twenty-two graduating senior athletes from prestigious Phillips Academy in Andover, Mass. signed a letter to the editor of the school newspaper on May 30 that explicitly endorsed feminism.

Saying it was “time to speak out” about the campus male athletic environment that fosters an “imbalanced hook-up culture, classroom dynamics and even defining the gender roles of females on campus that younger students emulate and eventually internalize,” Tyler Olkowski, captain of the crew team, was lead author of the letter saying he and his cosigners—which included the captains and leaders of every sport on campus—“realize our athlete culture has a problem.”

“This culture may not be our fault, but it is our problem to fix.”

Refusing to succumb to senior athlete reveries about scoring the winning goal or touchdown, the poignant letter instead underscores that the male athletes’ “collective character has been tainted by the objectification and sexism that pervade athlete culture. This culture may not be our fault, but it is our problem to fix,” Olkowski and company’s letter says. “It is time for Andover’s athletes to find new, constructive ways to bond and develop team camaraderie that aren’t based on conquering [at] dances and competitively targeting females; not by prodding teammates to “hook-up” and teasing those who don’t. The definition of “cool” doesn’t have to be a traditionally masculine figure who objectifies [his] sexual partners or who climbs [his] respective social ladders through hook-ups.”

Signers included the captains of the football, baseball, basketball, hockey and lacrosse teams

The letter, which has begun to circulate among profeminist men’s organizations, on gender justice websites, and among others advocating gender equality, is a hopeful indicator that another generation of men is learning to be allies to women—to be V-men—at a younger age. Since the signers included the captains of the football, baseball, basketball, hockey, soccer, lacrosse, track, cross country, golf, volleyball, water polo and squash teams, there’s every reason to believe these young athlete-leaders will arrive at college and university campuses this fall primed to take their commitment to challenge sexism and male (athlete) privilege to a new level. Their bold stand is inspiring and allies and leaders on their new campuses will surely be ready to embrace them.

Voice Male magazine joins these young athletes to keep the momentum building from their courageous statement.  The door of gender equality has been more widely opened because of these young men and now, before school resumes in the fall, is a perfect moment for their statement to be on the agenda not just of the athletic department at Phillips Academy but of those of departments across the country. Perhaps the student-athletes themselves have already sent (or will send) copies to the college coaches they’ll be playing for next year. Or, maybe Michael Kuta, the director of athletics at Andover will do so as an example of a new leadership model for male athletes.

After reading the Phillips Academy 22’s letter, can there be any question that male awareness of gender inequality is growing? In its wake, won’t it be more difficult to ignore voices advocating for a culture shift away from male domination and toward gender equality?  Those of us who have been working for decades on this shift proudly stand with these young men. Their voices embolden us to continue our work.

Now is the time to amplify those voices by encouraging colleges and universities to convene teach-ins and trainings on transforming student-athletes into student leaders for gender justice beginning as soon as this fall. Phillips Academy, which in 1996 established the Brace Center for Gender Studies might play a leading role in organizing or, perhaps, hosting such a gathering! It’s also time for athletic directors and school administrators in the U.S. to consider inviting Mentors in Violence Prevention(MVP) to conduct trainings on their campuses.

At Voice Male magazine we’re always on the lookout for good news like the young men from Andover made. There are lots more of those stories out there so we should all keep our antennae finely tuned to identify them. That way we’ll be ready to widely broadcast the next message promoting gender justice—whether it’s about One Billion Rising or one man changing.

As they all have just graduated high school, it’s probably premature to know if any of the Phillips Academy 22 will become fathers. I hope, though, that their fathers—and mothers—use this Father’s Day as an occasion to say how proud they are that their sons published the letter. Its last sentence asks next year’s senior class sportsmen to make a decision, to “silently perpetuate the culture we inherited, or choose the culture our teams and community deserve.” Their voices are exhorting the rest of us to choose, too, not from the sidelines or the field of dreams, but from our positions throughout the stadium of life.

Voice Male Editor Rob Okun’s new book, Voice Male: The Untold Story of the Profeminist Men’s Movement will be published this fall. He can be reached at rob@voicemalemagazine.org