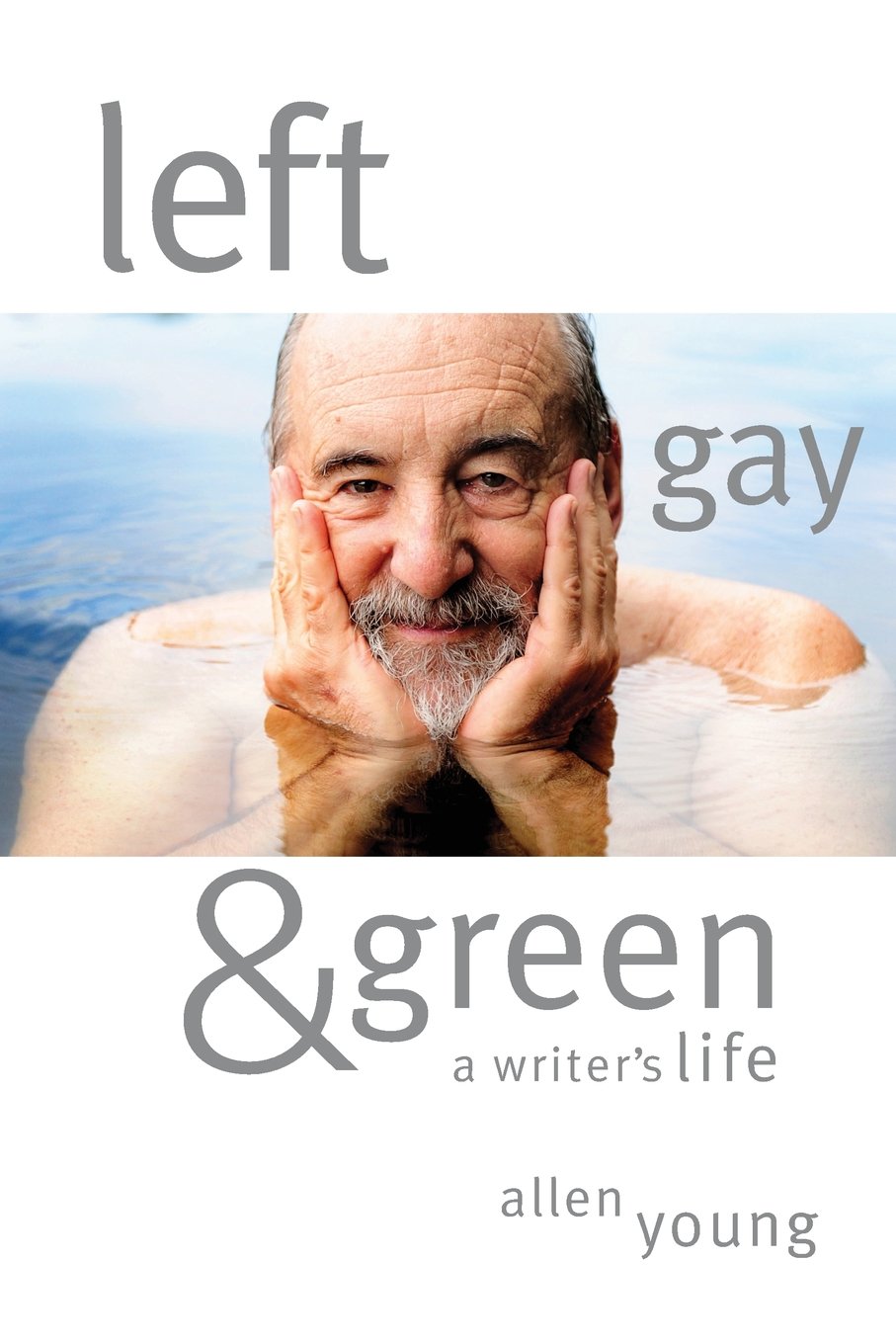 Review by Reviewed by Felice Picano

There have been so many books about LGBT lives cut short, and promising, even flourishing, careers upended by AIDS and other tragic circumstances. So when a book like Left, Gay & Green comes along, it’s a cause for celebration. Here is a life from before birth to the author now in his seventies, a volume I would recommend to any millennial wondering where is a past she can look to, searching for a gay person to admire. Because both are here.

Good luck and connections have to be allied to intelligence, ability, and ambition for one to lead a successful life. Allen Young had all of it. His background was humble—his parents were chicken farmers in the Catskills in upstate New York. His early scholarship got him into the Little Red Schoolhouse, in the 1940s and ’50s a bastion for “reds”— communists. Despite those precarious times for progressives, Young ended up at an Ivy League college, and his abilities and his interest in Latin America at Columbia University resulted in his attending several graduate programs in the U.S. and abroad: fellowships in Brazil, and reporting on the newly communist Cuba.

His work as a journalist was on two tracks: from his time as a Latin American correspondent for The New York Times and Christian Science Monitor—and briefly holding a staff position at The Washington Post—to his reporting for the burgeoning Liberation News Service, the New Left’s answer to the Associated Press. LNS ended up locating in Montague, on a western Massachusetts commune, a few towns over from where Young eventually settled.

Young describes all the ins and outs of ideological shifts vs. political constancy he both underwent and witnessed in those intense times, as well as the personal connections he made and the work he eventually got as a journalist in Washington, D.C. It could be said to be a meteoric rise.

Slowly it all shifted for Allen as it did for so many of us. Because even before the Stonewall Riot of 1969, he was grappling with not being heterosexual and that amazing protest brought it all to a head for him, as it did for so many others. Young joined the instantly formed Gay Liberation Front, which he accurately characterized as the “favorite hang-out of the freest of the gay people—those most likely to be labeled fag or drag queen.” He never regretted it. The GLF was succeeded by the Gay Activist Alliance, which had one focus—the abolition of all anti-gay legislation, which eventually succeeded. Within a few years, he and another member of that group, literature scholar Karla Jay, were putting together anthologies collecting the work of LGB authors who’d already written on a variety of subjects. Those books haven’t really been surpassed in their Gay Lib credentials, or in their range. Out of the Closet: Voices of Gay Liberation and After You’re Out became drugstore rack paperbacks that appeared all over the U.S., ensuring their influence for a generation. Their Lavender Culture followed, and each has since published a half dozen books.

Particularly absorbing in this hefty volume are Young’s descriptions of his time in Brazil in the turbulent 1960s, covering social movements, wrestling and exulting with his gay identity (including seeing a psychotherapist about his sexual identity and having a girlfriend), to uninhibited, shame-free liaisons with Brazilian men with whom he maintained friendships.

While all that was happening, another sixties movement attracted Young: the commune. Starting in various urban communes—there were plenty in Manhattan and Boston alone— he and several friends ended up purchasing a large piece of property in central Massachusetts. In order to remain there and continue building what eventually became Butterworth Farm, they had to find local work. Some became realtors in formerly abandoned New England mill towns, and then even politicians in those towns. The visually brilliant Carl Miller became a fabric designer who quickly rose to the top of his field. Young became a reporter for the local paper, The Athol (Mass.) Daily News, and later became the publicity arm of the area hospital. Reading about these men and other farms and communes is like reading another entire volume.

More recently, the land of which he is a co-guardian, as well as the lands around those acres, have become a prime focus of Young’s activism. The Quabbin Reservoir and its surrounding wetlands have become a crucial locus of his and other ecologists’ concerns. Equally so is retaining the established 19th century character of the mostly rural villages and towns in the area. Attempts by various industrial-commercial complexes to invade and alter that landscape have been staunchly resisted, but threats continue.

Allen Young has led a full life, filled with friends, family, work, relationships, and a longtime partnership. The book features numerous photographs going back to the early 1940s, a visual guide to family, farms, students, and young visitors in foreign lands, among others.

I met Allen at an early Gay Pride March in New York. I’ve stayed at his wonderful “Octagon House” at Butterworth Farm, swum in its nearby ponds and pools, hiked its hills, and shared in some of the author’s great losses and successes. Even so, I learned so much I didn’t know about his roots, his youth, and those around him, and even some of the times we shared. Obviously a “reporter” covering so much of his life in time and place can’t go as deep as someone writing a less ambitious text. There will always be a place on my bookshelf for Left, Gay & Green and, I hope, on yours too.

Throughout his career writer, publisher, and critic Felice Picano has encouraged the development of gay literature in the United States. A version of this review first appeared in Out in Print: Queer Book Reviews, outinprintblog.wordpress. com/2018/07/16/left-gay-green-a-writers-life-allenyoung- createspace/.

Against the Tide: Profeminism in the Twenty-first Century