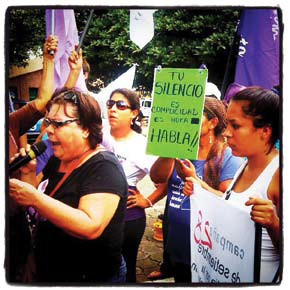 One of the reasons I was drawn to feminism was because its concern is not only with gender equality, but also with changes in all social structures that discriminate against people based on race, ethnicity, class, sexual orientation, age, nationality, ability and others. In the end, we are dealing with the same mindset of “power over” in which some think they are superior and therefore entitled to privileges, denied to “the others.” Many have internalized these beliefs, which are constantly reproduced by social institutions.

It is not a coincidence that the feminist women in Nicaragua, who in the early 1990s engaged me and other men in the feminist struggle, were former activists of the Sandinista revolution of the 1980s. They were committed to social justice and the human rights of the poor in my country: the peasants, the indigenous people, urban workers in unsafe jobs, and they opposed external, imperialistic powers. They understand that gender equality can develop only as part of a new social order and that for that to happen men needed to play a part. Oppression on the basis of gender is more damaging to the majority of women, but the majority of men are also oppressed, if not by gender then by other unequal systems of power.

It is in all of our best interests to join with women and with people from other genders to transform the status quo.

But we have a challenge here. Even when we join together—as is already happening to an extent in MenEngage and in other places—there are power issues within our movements and coalitions that we must name and confront. The exercise of positive and constructive power is still rare compared to the historical and pervasive use of negative power as a means to control others. Most of us grew up influenced by negative models of leadership. That is why one essential component of our work as profeminist male leaders is to constantly reflect on our personal practices. How are we exerting power within our organizations and with the communities with whom we work? How about in our families? Are we promoting gender equality in our speeches and in our writing, but retaining male privilege in our offices and homes?

I started reflecting on these questions during my participation as youth in the Sandinista movement in the late ’80s and early ’90s when I became disenchanted with the way many male leaders were using their power within the movement. They were reproducing the same model of domination that they were seemingly trying to change. Many were too busy trying to change the big social structures—fighting the “big battles”—that they neglected to remain vigilant of their own day-to-day patterns of domination, both in how they related to others and expended public resources.

One of the reasons why the MenEngage Alliance was created as a coalition of organizations working to engage men and boys in gender equality was precisely to support each other to increase our capacity to live our values in practice. We want to set high standards of feminist work to effectively contribute to the transformation of men and boys as allies both promoting gender equality and advocating for advancing a women’s rights agenda.

Our alliance is made of more than 600 organizations grouped in six regional networks across the globe which exchange experiences working with men and boys, including sharing lessons learned, and educational materials, and coordinating joint advocacy campaigns on specific issues. They include: men’s support for sexual and reproductive health and rights, preventing violence against women and children, and engaging men as involved, nonviolent fathers and caregivers.

In our work in Africa, MenEngage partners carried out capacity building activities in Kenya, Sierra Leone and Rwanda with parliamentarians, government representatives and uniformed personnel to strengthen their commitment to ending violence against women. All signed a pledge to work to find an end to this violence. It is especially strategic that we reach out and educate men to serve in political bodies. However, because of sexism many of these men disregard women’s voices.

As a consequence, men who consider ourselves allies to women must support women’s leadership, including speaking directly to these men, encouraging them to listen to women.

In Latin America, the MenEngage regional network recently organized online discussions, augmented by the participation of leaders and others from more than 15 countries. We discussed how men can support women’s access to sexual and reproductive health services, including advocating for women’s right to safe and legal abortion, and why it is important for men to assume greater responsibility in the area of contraception. These are low-cost initiatives, taking advantage of new technologies in communication which can be very powerful. (I still remember the moving testimony of a Mexican man who supported his partner going through a difficult pregnancy and then an abortion.)

In South Asia, our partners, in coordination with the International Association of Women in Radio and Television, are organizing a traveling film festival featuring 50 films selected to promote discussions and dialogue on issues of men, masculinities and gender equality. These films, and an accompanying facilitator guide, will be sent to all MenEngage networks around the world.

In order to promote changes in men and boys at different levels, from the intimate— digging in to men’s hearts and minds, and interpersonal relations men have with those in their families, workplaces, communities—we must address the most collective level of transforming social norms, laws and the institutional practices that shape men’s lives. Working at different levels requires a diversity of strategies. Power operates everywhere and men’s patriarchal power needs to be challenged, as do the institutional practices that perpetuate patriarchy. Men’s positive and constructive power needs to be supported and each of us has a role to play in supporting men’s transformation.

Oswaldo Montoya, the outgoing global coordinator of MenEngage, shared his vision for engaging men and boys at the Nordic Forum: “New Actions on Women’s Rights” in Malmö, Sweden, in June. This article is an edited version of his remarks.