In the War to Protect Masculinity, Hamas and Israel Make Strange Bedfellows

Amid weeks of horror and unconscionable suffering in the Gaza Strip there is a truth hiding in plain sight: Wild West manhood is being played out in the Middle East. Shoot first; ask questions never. Tough talkin’ man up bluster, both from Hamas leader Khaled Meshaal and Israeli Prime Minister Benjamin Netanyahu—poster boys for a strain of masculinity so toxic it’s infected thousands of young men on both sides.

The pair, and other male Israeli and Hamas leaders, have full-blown cases of mascupathy, a condition not yet found in any psychiatric manual. Psychotherapists Charlie Donaldson and Randy Flood describe such men as having few feelings (feelings are unmanly, feminine); loners (don’t get close to many people); exaggerate autonomy (asking for help invites mockery); and, always have to be in control (being vulnerable exposes you to fear and shame.) Sound familiar?

Toxic masculinity has many faces. Internationally, examples abound—from Russia and Ukraine to Egypt and Iraq, and, of course, the spiraling violence in Gaza, careening out of control as stubborn men with limited imaginations refuse to acknowledge the failure of their morally bankrupt policies. It’s not hard to connect the dots: for a month Meshaal and Netanyahu have been choreographing a new version of an old dance of destruction and death.

In the other war they’re waging—the one to protect conventional masculinity—the pair make strange bedfellows. Can’t you see National Rifle Association chief Wayne LaPierre introducing them at an NRA convention as they stand, hands clasped overhead like running mates in a political campaign? “The only thing that stops bad guys with rockets and drones,” LaPierre might say by way of introduction, “are good guys with rockets and drones.” Meanwhile, a growing chorus in the world community is rising up in anguish, crying out, “STOP! NOW!” trying to drown out the pair’s fiddling as Gaza burns.

What about men, at this painful moment? We have an opportunity—we’re being challenged, actually—to step forward—as men—to demand the male leaders on both sides end the violence. Despite males in every culture continuing to be socialized to follow conventional notions of manhood, attitudes are shifting; men on every continent are working to redefine masculinity—from university campuses in the U.S. to major cities across Asia. (A November symposium in Delhi on transforming manhood is en route to registering 600 delegates from 90 countries.)

At one point during NBC’s July 21st interview with Prime Minister Netanyahu, anchor Brian Williams recounted how the night before the network had “aired scenes of the largest hospital in Gaza having to turn away dead bodies at the hospital morgue…” He asked Netanyahu, “How does it strike you as a father, as a human being? (Emphasis added.) Netanyahu replied, “It’s very saddening. To see any of these civilian deaths is terribly saddening…” Not, “I’m saddened. Not, “I’m terribly saddened.” No doubt Hamas leader Meshaal would have answered similarly if asked about the Israeli dead.

Men can no longer afford to stand passively by as other men, like Meshaal and Netanyahu, assume positions of leadership, men so detached from their hearts they somehow speak about the disfigured corpses of children dispassionately, without a quiver in their voices, without choking back tears.

Men willing to end our silence about the damage caused by toxic masculinity have a real role to play in interrupting the Gaza war; all war for that matter. If the male leaders of Hamas and Israel don’t speak for us, we have to tell them so. Now.

Rob Okun is editor of Voice Male magazine and the new anthology, Voice Male: The Untold Story of the Profeminist Men’s Movement. He can be reached at rob@voicemalemagazine.org 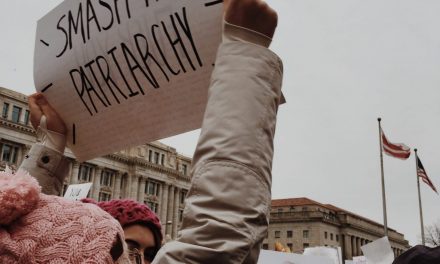