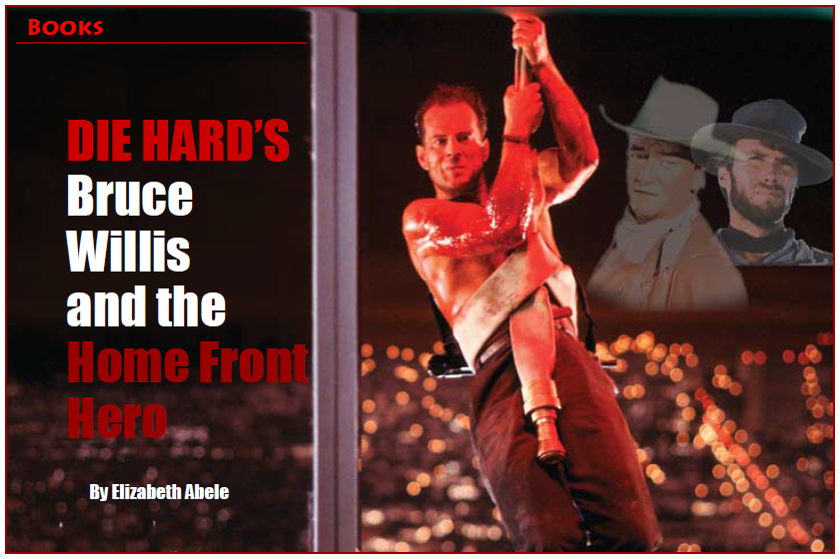 The horse opera and soap opera, then, embody two of the most important American traditions, the frontier and the hometown. But the two traditions are split rather than fused. They show radical  separation between business and society, between action and feeling, office and home, between men and women, which is so characteristic of industrial man. These divisions cannot be mended until their fullest extent is perceived. —Marshall McLuhan, The Mechanical Bride, 1951

From a half century ago when Marshall McLuhan first published The Mechanical Bride until today, depictions of the male hero in American popular culture have followed a winding road. It has included a number of detours along the way including the hysterical glorification of American manhood in the 1950s, the dark cynicism of post-Vietnam/post-Watergate America in the 1970s, and the reactionary recuperation of victory during the Reagan era. The common theme of these widely disparate texts is determining a man’s true responsibility to society, his family and himself: in other words, an attempt to answer that American command of “what a man’s gotta do.”

Cultural critics such as McLuhan, D. H. Lawrence, Leslie Fiedler, Michael Kimmel, and Jane Tompkins have noted American popular culture’s long preference for the hero who avoids romance and personal entanglements, putting duty before his own desires. However, since the late 1980s, Hollywood has regularly presented heroic figures equally  capable of romance, commitment, and family ties. For instance, in Die Hard (1988), Holly and John McClane (Bonnie Bedelia and Bruce Willis) were not stock characters—long-suffering passive woman and hard-bitten, stoic man (just “doing his duty”)—but a couple battling to understand themselves better and make their relationship work. (There just happened to be Eurotrash robbers around to contend with.)

Like Willis’s television character David Addison in Moonlighting, McClane is selfaware and articulate, improvising his way through crises while always keeping his eye on the “girl.” In Die Hard, Willis bridged the classical American divisions between the frontier and the hearth, between movie viewing for “guys” and “chicks.”

Although Arnold Schwarzenegger, Sylvester Stallone and their clones were still making a lot of money at the box office, films like The Hunt for Red October (1990), The Last of the Mohicans (1992), and Speed (1994) featured this different kind of heroic male, an active hero who still got the job done, but valued his personal relationships and his own desires in a way rarely allowed the “Duke”—John Wayne—or other ideal American masculine figures. Like Die Hard, these films combined the triumph of action movies with the quest for domesticity generally reserved for romantic comedies—or soap operas. This variation of the American hero, a “Home Front Hero,” was because of his active quest to become part of a home and a community. Rather than the traditional American hero (a stoic loner), the Home Front Hero refuses to sacrifice his personal desires for society, remaining committed to family and community in the most expansive definitions of these terms, while fulfilling the specific heroic requirements of the situation. 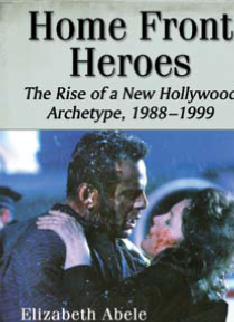 Instead of seeing himself as exceptional, the Home Front Hero prefers to work collaboratively, recognizing the abilities of the 1990s Robert Bly wild man—but a courageous male who puts self-knowledge and family first, who protects the home front as it protects him. Instead of an ideal masculine figure who prefers to act and live alone (focused solely on his duty and his exceptional position), the Home Front Hero values collaboration across gender and racial lines, affirming humanistic values of community, parenting, and intimacy. Looking critically at the version of American masculinity that evolves in these films allows us to make a distinction between Home Front Hero movies and more traditionally masculine representations in Hollywood action fare. Whereas the previous popular American heroic narrative involved the conquest of “uncivilized” land and people  for the benefit of others, the American heroic quest of the past two decades has often involved a reclamation of home, creating a place for the Hero at the hearth, as part of an intimate community, with less restrictive gender and racial boundaries. In McLuhan’s terms, we may be bridging the chasm between horse operas and soap operas, moving toward a better understanding of the potential of triumph and the hearth, and the benefits of being a man (or woman) who is able to experience both.

Though popular culture’s reframing of the Hero is certainly tied to the questioning of white, masculine privilege that became mainstream in the late 1960s and 1970s, the costs and limitations of this traditional Hero occasionally appeared prior to these movements. In 1962’s The Man Who Shot Liberty Valance—directed by John Ford— John Wayne’s character (Tom Doniphon) is the only one “man enough” to defeat the villain, Lee Marvin (Liberty Valance). His is a “victory” that forever separates Tom from the woman he loves as he gives the credit to the “more civilized” character portrayed by James Stewart (Ranse Stoddart). The fake Hero, Stewart’s character, is rewarded with a long marriage and a seat in the Senate, while the real Hero, John Wayne’s character, receives a pauper’s funeral, dying without his boots or his gun. This alienation, this exile from the hearth, becomes the overarching characteristic of the western’s Hero, the figure that for so long has been embraced as an American masculine ideal.

While the traditional, hardened protagonist was still featured in Hollywood action films, movies such as The Abyss (1989), The Last of the Mohicans (1992), and Forrest Gump (1994) presented action heroes who still got the job done, but valued their personal relationships and their own desires in a way rarely allowed the hard men played by John Wayne or Clint Eastwood. As in Die Hard, these films combined the triumph of action films with a quest for domesticity generally reserved for romantic comedies.

What sets Die Hard apart from these related films, however, is its wide influence and scope. Ultimately, its basic formula (an off-duty hero forced to liberate an enclosed space and his family members) is much less important than the film’s establishing a heroic model that portrays an alternate masculine ideal. John McClane may appear to be just another man who has been isolated from his family by his duty—and who has the traditional masculine resolve to singlehandedly save the day—but he actually triumphs over his opponents without sacrificing either his individual humanity or his personal desires.

Die Hard demonstrates also that society does not make it easy for the Hero to focus on home. John is separated from his wife and family because he could not let go of his identity as a New York cop and accept following Holly to Los Angeles for her career. In a Christmas party scene where everyone is more interested in celebrating money (or sex) than observing a traditional holiday, John still carries presents and plays with Christmas decorations. In this upsidedown world, he is not interested in violence for violence’s sake, avoiding it whenever possible, but in the film violence is hard to avoid that Christmas Eve. He is not explicitly out to save the day and defeat the terrorists: they are just in the way of his much-desired reconciliation with his wife. Although he simultaneously defeats the terrorist-robbers, his personal values expand the definition of the heroic man, setting him aside from the traditional screen hero. Instead of being presented as an allpowerful figure, he is rarely in control—from his confession that he is uneasy about flying, to having to fish for an invitation to stay with his estranged family (where he is only permitted to sleep in the guest room). John does not succeed on his own but relies on others throughout the film. His chief allies are two men who are not his physical equal: a skinny limousine driver and an overweight desk-bound cop. As individuals, the characters Argyle and Al demonstrate their commitment to family and friends over duty and “heroics.” But unlike John, when their time comes to be heroic, they do not miss. Instead of being assets, John’s developed body and sense of duty get in the way of his relationship with his family. Only through the humbling of his body and himself can John learn the priorities that Argyle and Al always had.

Remarkably, Bruce Willis’s white hero in Die Hard actually collaborates with previously marginalized characters: they are neither wholly in service to him nor in need of his rescue. In fact, the final heroic actions in Die Hard come from the black and female characters, while John McClane either misses the shot or ducks. His ability to let go of his self-control and to trust others is essential to his developing a more livable manhood.

As the title Die Hard suggests, McClane, like other Home Front Heroes, is not fainthearted, but committed to “stretching and growing.” As Hamlet understood, it takes a lot of courage “to be,” to grow and find your own path—or in Erich Fromm’s terms, to move from “having” to “being.” This is likewise a quest that film audiences may emulate more easily than saving the world from terrorists or aliens. Bruce Willis entered the ranks of Hollywood action heroes at a transitional time in American gender politics, bringing his
female fans with him from Moonlighting and then building a movie career that respected both traditionally masculine and feminine values. His success created a space in the American heroic tradition where the ultimate quest is not on the edges of civilization.

Other action stars who similarly moved from television to the big screen—including John Travolta, Denzel Washington, Will Smith, George Clooney, and Ryan Reynolds—have likewise created flexible personas as they have portrayed both traditional hardened Heroes and Home Front Heroes. The quest of these courageous male protagonists—and those that have followed—is to save themselves and those they love, creating along the way the beginnings of a new understanding of masculinity and a sustainable and rewarding life that starts from the shelter of hearth and home.

Elizabeth Abele is an associate professor at Nassau Community College in Garden City, New York, and is executive director of the Northeast Modern Language Association. This article was adapted from her new book, Home Front Heroes: The Rise of a New Hollywood Archetype, 1988–1999 (McFarland, 2013, http://www.mcfarlandpub.com/book-2.php?id=978-0-7864-7333-5).