Hanna Rosin and the End of Men 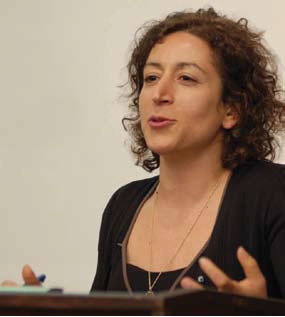 You’d have to have been napping – as those legions of stay-at-home dads often do – to have missed the hoopla over Hanna Rosin’s cover story in The Atlantic two years ago, provocatively headlined, “The End of Men.”

Well, now it’s a new book that, I believe, will be misread. Rosin’s been called a radical feminist for celebrating men’s demise, and an anti-feminist for suggesting that women have already “won” and that discrimination is a thing of the past. I think some of this misreading is deliberate —people read with agendas, after all. And I think some part of it has to do with the way the book is framed by Rosin and her marketers. After all, the central thesis of the book is contained not in the big, bold, headline, “THE END OF MEN” but in the smaller print subtitle “and the rise of women

.” I believe that the subtitle—and the subtext—of her work is entirely right, and the title just as surely wrong. I’ll explain in a moment. But first, a story.

I’ve been teaching gender studies courses at large public universities for 25 years. Being a sociologist, and teaching large classes of 300-450, I often do little surveys in class. When I started, 25 years ago, I asked my women students what they thought it meant to be a woman. Be nice, pretty, smile, cooperate—these were the typical responses I got. When I’d ask the men, they’d say—remember, this was 25 years ago—John Wayne.

When I ask them now, the women say “Huh? What does it men to be a woman? I don’t know. I can be anything I want. I can be an astronaut, a surgeon, Mia Hamm or Lady Gaga.” And, when I ask the men? “Ah-nold.”

Okay, so maybe not Arnold anymore. Maybe some other, as Rosin says, “cardboard” cut-out action figure. The women believe that the feminist revolution is over—and they won. They believe they can have it all, they can do anything they want, sleep with anyone they want, pursue any dream they want. And the men are still locked into the same ideology of masculinity that defined my era; that defined my father’s era.

In a sense, this change is what Hanna Rosin is writing about—the dramatic change in women’s lives over the past half century.

The question is what has been the impact on men of these enormous changes in women’s lives over the past half century?

To try to answer that, I want to tease out some assumptions in Rosin’s argument, and then point to a couple of areas in which I think a different framing might be lead to a more accurate understanding of the state of American masculinity.

One assumption is causal: The relationship of title to subtitle makes it appear that men ended first, and women have arisen to take their place. Surely this is backwards history. If men are ending, it is attendant upon, and a consequence of, the rise of women. They are women, we hear them roar and we shrivel right up.

The second assumption is logical. Rosin’s title and subtitle—indeed, the entire book until the conclusion—assume that gender is a zero sum game; that one rises and one falls, that neither can they rise together nor can they fall together. Even if she does not share the interplanetary theory of gender—that women and men are from different planets—she does believe that there is a battle of the sexes, a war between the sexes, and that, at present, as one of her male informants puts it, “our team is losing” (p. 61.)

This is what I also call the “either/or” assumption. Either women are winning or losing; either men are winning or losing. Either things are getting better or they are getting worse. Either we’re all bowling alone or we’re facebooking everyone we’ve ever known in a virtual friending frenzy, creating the densest social networks the world has ever known. Either hooking up is his wet dream (and her nightmare) or her sexual empowerment is at his expense.

We sociologists see things differently. We see things as “both/and.” Both statements are true. It is understanding the relationship between the two sides is that is our analytic tofu.

The third assumption is sociological: Rosin treats men—or as she calls her two-dimensional cartoon version, “cardboard man”—as some antediluvian dinosaur, unwilling or unable to adapt, slouching towards extinction.

But this assumption raises two questions. First which men is she talking about? When she writes that “men’s hold on the pinnacles of power is loosening” (p. 199), is she speaking of gay men, black men, Latino men, working class men, upper class men, Asian men, transmen, older men, boys? Assuredly not. Actually, even if was the “end of men” it’s really the end of middle class straight white men. And it’s not really the end of them, of course. It’s the end of their unquestioned entitlement.

Second, if men are ending, what is driving them towards this cliff of oblivion? Is it the rise of women? I don’t think so. I think it’s the archaic definitions of masculinity that are—and this is key—enforced and policed pretty relentlessly by other men. Rosin omits the central dynamic of masculinity—its homosociality.

In fact, not only does Rosin think that women’s rise spells men’s doom, but that women are also responsible for holding themselves back; as she puts it, “the internal barriers are likely to be the harder fight.” (p. 230)

Hanna Rosin does, I believe, focus the conversation on the right issues. Interestingly, in the book’s conclusion, she changes course. This isn’t the “end of men” at all! Men, she writes, “will learn to expand the range of options for what it means to be a man” (emphasis added, p. 263.) Cardboard man is becoming more plastic. And, adds Rosin: “I want to teach them to bend.” She can help, but basically nowadays the brothers are doing it for themselves.

Michael Kimmel is the author or editor of a number of books on men and masculinity including Guyland, distinguished professor of sociology at the State University of New York at Stonybrook, and a Voice Male contributing editor. A version of this article was the basis for some of his remarks at a conference on “ The End of Men” at Boston University Law School in October.