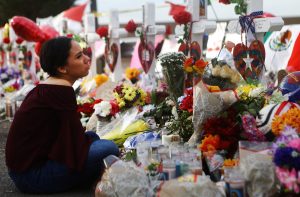 EL PASO, TEXAS – AUGUST 06: Yamileth Lopez sits while holding a photo of her deceased friend Javier Amir Rodriguez at a makeshift memorial for victims outside Walmart, near the scene of a mass shooting which left at least 22 people dead, on August 6, 2019 in El Paso, Texas. Rodriguez was a sophomore at Horizon High School and was killed in the shooting. A 21-year-old white male suspect remains in custody in El Paso, which sits along the U.S.-Mexico border. President Donald Trump plans to visit the city August 7. (Photo by Mario Tama/Getty Images)