From “MenEngaged” to Men —and Women—Being Enraged By Gary Barker 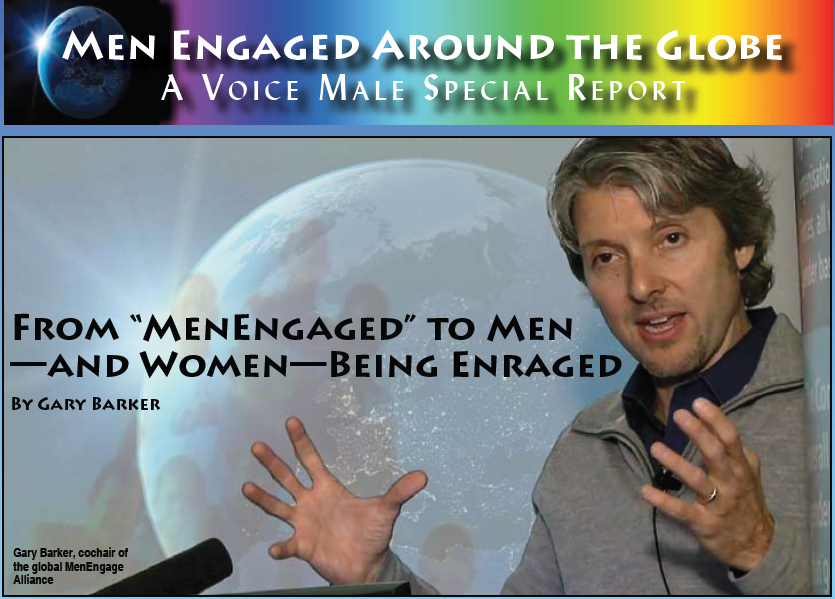 Engaging men and boys as allies in gender equality has become the buzz phrase in development circles. Donors are asking for it. The UN is talking about it. Emma Watson caused UN Women’s website to crash from the sheer volume of hits when she endorsed its new He-for-She campaign. And yet, 20 years after the Beijing conference on women, and five years since the first global MenEngage symposium, we run the risk that our once revolutionary cause becomes the next toothless fad.

As cofounder and cochair of the global alliance MenEngage, now some 600 NGOs strong, I often hear this observation: You must be pleased with how much attention the issue of engaging men is getting. Let’s  hold our enthusiasm in check. We should celebrate only when we see true and sustainable progress toward gender equality and social justice. Until then, MenEngage must be Men EnRaged.

Let’s start with violence. Global data confirms that about a third of the world’s women have experienced violence from a male partner. We have little evidence— with the possible exception of the U.S. and Norway—that any country has been able to reduce its overall rates of men’s violence against women. There are challenges with measuring violence, to be sure, but it’s far too early to claim that we have made real progress in reducing the daily threat to women and girls.

Men too are victims of violence in gendered ways. There are an estimated 55,000 direct conflict deaths and more than 400,000 deaths by intentional homicide annually—more than 80 percent of those murdered are men. In addition, there are 800,000 deaths from suicides each year; about two-thirds of those are also men. And we know which men commit suicide: men who are socially isolated, who feel they can’t reach out for help, whose sense of identity was lost when they lost their livelihoods. Men stuck in the gender box.

Let’s look at other social indicators. In education, there are notable improvements: 90 percent of girls are now enrolled in primary school, as are 92 percent of boys. The numbers get worse at the secondary level, with 63 percent enrollment for girls and 66 percent for boys. These figures represent sizable gains compared to 20 years ago. But then let’s consider what girls and boys too often face in school: sexual harassment, sexual abuse, homophobic bullying, and cultures of competition instead of a culture of cooperation and connection. We can celebrate when our schools are safe places not just to be but where all girls and boys can thrive.

In reproductive and sexual health, we have similarly seen limited advances, if at all. In 2005, women represented 75 percent of global contraceptive users and men 25 percent. By 2014, women represented 73 percent. Hardly numbers to celebrate and proclaim equality; indeed, that change does not even pass the confidence interval. Why does it matter? Well, last time I checked, reproduction involves women and men. Anything less than 50-50 in terms of contraceptive use cannot be called equality.

In the workplace, the challenges are just as daunting. Globally, 77 percent of men participate in the paid workforce, compared to just 50 percent of women—a proportion that has remained virtually unchanged for 25 years. Even when women are in the workplace, they earn on average 18 percent less than men for the same work. Some may scratch our heads at the lack of progress in terms of women’s employment, but we actually know what the reasons are: Women and girls carry out two to 10 times the amount of unpaid care work that men and boys do.

Few countries outside of Scandinavia have created policy incentives to encourage men to do a near-equal share of unpaid care work. With all the attention to the unpaid care work burden women carry, why are there not more people—including men—bold enough to suggest that males might actually do 50 percent of that work?

Unpaid care work illustrates the challenge deeply considering what large-scale, structural change to achieve gender equality would look like. Consider this: if women’s participation in the workforce were equal to men’s, the U.S. GDP would be 9 percent larger and India’s GDP would be 1.2 trillion U.S. dollars bigger! Rolling out microcredit and cash transfer programs is effective in the short-term but they are, as the word says, “micro” solutions. Want to see macro change? Add 9 percent to the world’s largest economy and $1.2 trillion to India’s. We should also be enraged by the fact that much of the efforts to “engage men and empower women” simply reinforces the gender binary instead of breaking it. On the one hand, too much of our work with men and boys is done apart from women and girls. On the other, too many of our efforts to empower women and girls rely on merely counting women as beneficiaries instead of truly changing underlying inequalities, or understanding the complex relationships in which women live.

Other times, we stare the gender binary in the face but do nothing to change it. Take the case of women’s income contributions to their families. Study after study confirms that income in a woman’s hands is more likely to be spent on her family, and to benefit children, compared to income in a man’s hand. But rather than trying to change this reality, we too often fall back on saying: “We must promote more women’s economic empowerment.” Of course we must invest in women’s income. But why are not more of us also enraged by men’s lack of contributions to their households? Why are we not funding and evaluating approaches to encourage— and when necessary, obligate—men to pay for the children they have and cajoling them every single day to be equal investors in the well-being of those children? Shame on us for not being imaginative enough to believe this simple truth: men can change. Shame on us, as well, for ignoring the potential (not just the obligation) men have to care for and contribute to maintaining their households and raising their children.

Our efforts to end gender-based violence run into similar barriers and show the same short-term thinking. Let’s start with language. When we say “gender-based violence” or “violence against women” we mostly mean men’s use of violence against women and girls. We need to, as Jackson Katz cogently reminds us, call it that. Doing so doesn’t take the focus off the harm women face. Rather, it makes us look at who uses the violence, why they use it, and what must happen to stop them from using it. At the same time, we must understand which women experience violence and why.

We should also be outraged by our lack of rigor in our well-intended violence prevention efforts. Sure, it is laudable—and high time—that men are also outraged by some men’s use of violence against women. But let’s be smart enough to know that just raising our voices and clicking on a website or carrying a poster once a year is not enough. There is a rapidly expanding research base in what works in preventing men’s violence against women. We must use that research to scale up effective efforts and not simply roll out ineffective, poorly thought-out programming. Our activism and our science can and must be intergrated. As we approach 20 years since Beijing and five years since the first MenEngage Symposium in Rio, I am not pleased that “engaging men” is trending on Twitter. Of course, I applaud He for She and its desire to get a billion men to support gender equality. But let’s be real: social media and online activism are tools, not ends in themselves. If we want to oust corrupt regimes and overcome structures of inequality, let’s remember that after we’ve clicked our likes, we have to head to the streets, roll out the training, implement the plans, collect the data, make the arguments, and live and measure the change.

Where do we go from here? To my brothers working to engage men in gender equality: Let’s get over ourselves. Michael Kimmel reminded us at the symposium in Rio that we too often suffer from “premature self-congratulation.” It’s easy to think the cause of gender equality didn’t exist until we came along and to ignore that women have experienced and led during these last 20 years (and well before). Humility and partnership go a long way.

To our women partners: it is sometimes a challenge to think that men need to be involved in the cause of gender equality. But we must be thoughtful enough to understand that men are implicated in gender inequalities, sometimes as obstacles, sometimes as victims—sometimes both at the same time. The patriarchy of poor men, as Naomi Hossain reminds us, is not the patriarchy of rich men. Boys dropping out of school is not cause for celebration. It is possible and necessary to talk about men’s gender-related health problems and vulnerabilities while simultaneously recognizing the inequalities women face. We can talk about male victims of sexual violence—in conflict, or in homes and schools—and not lose sight of the violence women experience. Indeed, the root causes are often the same. Our vulnerabilities as men create vulnerabilities for women and vice versa.

Celebrate 20 years since Beijing? Celebrate “engaging men”? Not this week. Not yet. Not until we move beyond binary thinking; us-versus-them thinking. There can be no progress until we affirm as women and men that gender equality requires understanding women and men. To say that, we must look both at the structural and the individual. To say that, we must use the best evidence available, and employ it in our activism. To say that we want to end patriarchy in the lives of women and in the lives of men. Anything else will be an incomplete revolution.

Gary Barker is founder and international director of Promundo-DC, the U.S. office of Instituto Promundo, a Brazilian NGO, based in Rio de Janeiro, that works locally, nationally and internationally to promote gender equity and to reduce violence against children, women and youth. He is also cofounder of the global alliance MenEngage, hundreds of NGOs around the world working with men and boys to promote gender equality. This article is an edited version of remarks he prepared for the MenEngage symposium in New Delhi in November.