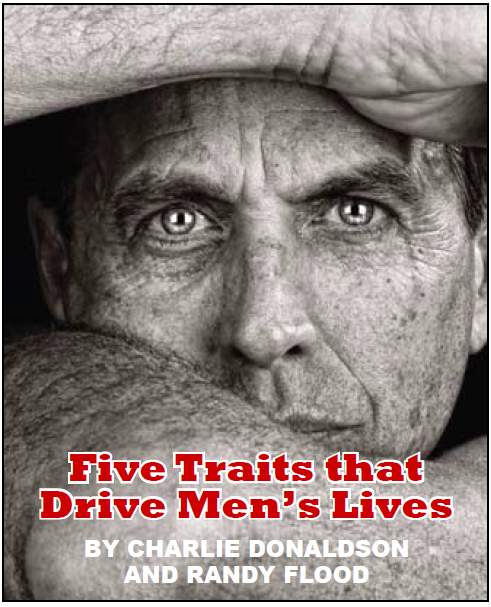 By Charlie Donaldson And Randy Flood

Not long ago we were having dinner with friends when the topic turned to the premise of our new book, Mascupathy: Understanding and Healing the Malaise of American Manhood. The turmoil in most men’s lives is a product of a socialized disorder we had dubbed mascupathy, where traits such as aggression and invulnerability are exaggerated, and those of openness and empathy are repressed.

Not everyone at the table agreed. Michael said flatly that the turmoil of men’s lives was all about sex. Randy responded that it was all about male socialization: the lessons of the man-pact—the ancient code that defines what’s masculine—that’s enforced by the “man-pack,” the unorganized but immensely powerful alliance to which virtually all men knowingly or unwittingly belong. Charlie weighed in that although narcissism and sex may be drivers, they’re not the paramount factors in men’s lives that lead them to intimidate each other, distance themselves from their partners, drink, and work too much. For Charlie, it came down to one core observation: men are lost.

The men around the table spent the next couple hours in a wideranging conversation, eventually agreeing on five traits that lead to the turmoil that so often typifies men’s lives.

1. Lost. In this time of seismic change in gender roles, men’s struggles have intensified as women increasingly take their rightful place in the world. Many men are unable to meet the challenges this new day presents, in part because traditional masculine behaviors have become both less acceptable and less functional, and men are no longer unquestionably ruling the roost. While some traditional gender roles remain entrenched, many of the ancient entitlements men have enjoyed are being challenged. The result: many men feel bewildered and fearful. Lost and depressed, they isolate themselves and become more insular and estranged.

2. Shamed. The age-old man-pact has established expectations for men that are impossible to meet. Men often feel they’re not strong enough, smart enough, or confident enough. They wear a mask that says, “Everything’s okay,” while harboring deep feelings of inadequacy and unworthiness. Their shame becomes overt depression—withdrawal, sadness, and lethargy—but can also result in what psychotherapist Terry Real calls covert depression—anger, assault, indignation, and violence.

3. Traumatized. Men live with unseen trauma similar to PTSD, harboring a reservoir of both conscious and hidden fears. In our work with men over several decades, more than anything else what we’ve seen is most men view the world as a deeply unsafe place. Virtually all men have endured repeated psychic injury. Boys who are victims often turn into bullies themselves, not only trying to minimize the trauma but also glamorizing it as a way to toughen up. The most serious impact of male trauma results from men’s failure to resolve their emotional pain and grief. They transfer their pain onto unsuspecting and innocent partners and children. And since many men have not addressed their own pain, they have little capacity for empathy.

4. Lonely. Most men are deeply lonely. Many are often out of touch with their loneliness, experiencing it as irritation. And, even if they have identified it, they try not to show it. Loneliness is perceived as an admission of needing others, a trait better suited for teenage girls and old people, not “real men.” Even men who surround themselves with other people often have superficial relationships, and their fundamental need for intimacy goes unmet. Men’s unmet need for connection makes them seek out non-relational sex, a form of pseudo-intimacy which ends, and then their loneliness returns like a runaway train.

5. Avoiding femininity. Despite progress in redefining our notion of manhood, much of male socialization still focuses primarily on training boys to be aggressive and violent. Displays of femininity open men to ridicule, ostracization, and humiliation. Anything girly is to be avoided. In fact, the most serious insults between men are not name-calling about physical weakness or being sensitive, but the taunts: “girl,” “bitch,” “sissy.” The use of words castigating femininity not only instructs men in their behavior; it also exposes deep-rooted misogyny in many men.

Like our dinner conversation that night, the list could have gone on longer. Our discussion had not only served to remind us of men’s struggles but it also reinforced what we had learned from years working as psychologists: there is hope for men. We have seen countless times their broken sense of self repaired in men’s therapy groups.

The shame of not feeling man enough diminishes when men are in the company of other men who refuse to engage in oneupsmanship. Men’s therapy groups help males overcome unhealthy traits and
develop a stronger sense of self, incorporating five new traits: selfawareness, authenticity, compassion, intimacy and egalitarianism.

When men learn how to incorporate these traits—21st-century rules of masculinity—they can help strengthen the new man-pack and join the larger social movement in which they can lead healthier lives for themselves and their families.

Charlie Donaldson is co-author (with Randy Flood) of Mascupathy: Understanding and Healing the Malaise of American Manhood. He is presently working on a new book, Reinvention Therapy, a treatment protocol for male substance abusers that incorporates resocialization from conventional masculinity as part of the recovery plan.

Randy Flood is co-director of the Institute for Prevention and Treatment of Mascupathy. Interviewed recently for his expertise about men and masculinity by the Christian Science Monitor, and Minneapolis Star Tribune, among other media outlets, he is developing a curriculum on boys, bullying and masculinity for schools in greater Grand Rapids, Michigan.