Several months ago I was on television speaking about rape culture. It was shortly after the allegations against Jian Ghomeshi (the former Canadian Broadcasting Corporation program host and musician) had come to light. He is on trial for seven counts of sexual assault lodged by six women. I was part of a panel discussing sexual assault and violence against women. I made sure to keep what I was saying pretty basic—not too radical, and completely based on easily available statistics. I wasn’t in “angry feminist” mode; I was more like “nice-girl-on-TV-who-maybe-smiles-too-much” I was aiming to came across as likable and reasonable.

Later, the television program uploaded the segment to YouTube. The first comment was a man saying that I deserved to be raped. I wish I would tell you that this comment was some kind of anomaly, but of course it wasn’t. Rape threats, death threats, and general threats of violence populate my inbox, Twitter mentions, and blog comments. I’ve had people target my family—one popular tactic is to threaten to report me to Children’s Aid as an abusive parent.

What makes these incidents even worse is just how common they are, not only for me, but for any woman who speaks out or takes up space, especially on the Internet.

“Men in formal and informal networks are engaging in targeted speech with the express intention of silencing women,” said Professor Joanne St. Lewis, of the University of Ottawa’s Faculty of Law and lecturer at the University of Southern California CREATE: Homeland Security Center of Excellence Executive Program on Counter-Terrorism.

We need to start calling things by their real names. This is gender terrorism.

A terrorist is, by definition, someone who uses violence or threats of violence in order to intimidate or coerce. With that in mind, these men are textbook terrorists.

In an era where the word “terrorist” is so frequently used to describe certain types of violence that the BBC recently warned its staff to employ “careful thought” when deploying the term, it seems unbelievable that people continue to be reticent about applying it to the online abuse and targeting of women.

“It might initially seem that referring to the online speech targeting and silencing of women as terrorism is overblown,” says Prof. St. Lewis. “However, these attacks are having real-time impact on the lives of individual women activists and result in preemptive censorship, by the women initially targeted and other women, to avoid further attack. This is limiting our ability to advance our rights, shape our activism, and participate in democratic policy-making processes.”

This past year has offered plenty of evidence of the real-life consequences of this type of online harassment. At the height of GamerGate, game developer Brianna Wu was advised by the police that she should leave her home after receiving repeated and detailed threats against herself and her family. She recently tweeted that she has received 45 serious death threats.

A talk by media critic Anita Sarkeesian at Utah State University had to be cancelled after someone threatened to carry out a “Montreal Massacre–style attack” (a reference to the 1989 murder of 14 women at Montreal’s École Polytechnique); Sarkeesian has also been driven from her home at several points.

When ModelView Culture (modelviewculture.com) founder Shanley Kane criticized the Linux community for their ongoing support of one of their leaders, a man with a long history of abusive and oppressive behavior, the home addresses of every member of her immediate family were published online. Kane herself received thousands of threats of violence, rape and death.

Writers and activists Feminista Jones, Sydette, Pia Glenn and Imani Gandy all recently spoke out in an article for Alternet about the gendered, racist abuse women of color face on Twitter just for being women of color in a public space.

These examples are only the tiniest slice of the violent harassment women face online. These are only the biggest, most egregious cases, the few that manage to make it into the news. The reality is that threats like these are being volleyed at women almost constantly. Sometimes they escalate to the point that law enforcement becomes involved; other times the outcome of these attacks is women stepping back, shutting down social media accounts, and retreating from online discourse.

But whether the result is a woman being forced to leave her house or a woman locking her Twitter account, the intent is always the same: to silence women. Not just one woman, but all women.

“These men want to shift the terrain from the realm of ideas where speech resides, to one of psychological and/or physical warfare,” Prof. Lewis asserts. “The stratagem of using sexual violence is not accidental—it is deliberate and gendered.”

All these threats are happening publicly, in broad daylight, by men using their real names. That is how minimal the consequences are for this type of harassment and abuse.

We continue to refer to these occurrences as “harmless threats,” and blame women for not being willing to engage in “robust debate.” The idea of free speech is often invoked, and women who are targeted are often told that if they can’t take a joke, they should get off the Internet. People will often say that men experience just as much online harassment as women, an argument which completely ignores the violent, gender-based threats that women receive.

“When we call it terrorism we are clearly stating that the harm to women online creates a democratic deficit for all of us,” St. Lewis countered.

“Women’s citizenship and entitlements to dignity and respect do not stop at the virtual border of the Internet. The word ‘terrorism’ should make people sit up and pay attention. It calls for acknowledging a serious problem, taking quick action, and providing resources and accountability. These are all overdue in this area where the trolls and cyberbullies thrive.”

This type of terrorism needs to be treated with the same degree of gravitas that we give other forms of domestic terrorism. There needs to be accountability, and there need to be swift and just consequences.

Above all, we need to recognize that these online threats are neither random nor harmless but rather part of a systematic effort to terrorize women.

Anne Thériault is a Canadian writer who writes for Ravishly and the Daily Dot, among other publications. She also maintains a blog about feminism, mental health, and other topics at bellejar.ca. She lives in Toronto with her husband and son. A version of this article appeared on Vice (http://www.vice.com/en_ca/read/lets-call-female-online-harassment-what-it-really-is-gender-terrorism-481) 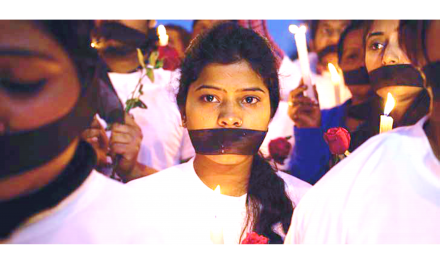 India: A Hard Place to Be a Woman