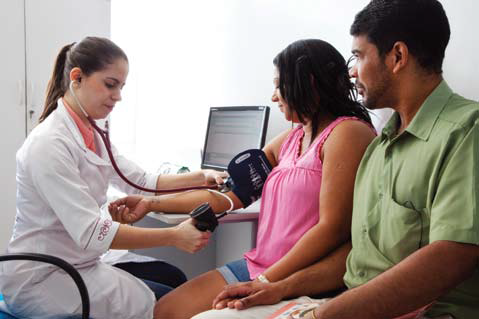 Cleber Leonardo Ramos accompanying his wife to a prenatal appointment at the Vila Joaniza health center.

They arrive one by one; fathers, mothers and childcare workers. They’ve been invited by leaders of the Stella Maris Municipal Daycare to talk about paternity and caregiving with an NGO that at that moment wasn’t very well known to them: Instituto Promundo.

Cleber Leonardo Ramos, 35, is one of the fathers who accepts the invitation. Like all participants, he is a resident of Vila Joaniza, one of 700 favelas in Rio de Janeiro that share the same challenges every day: precarious sanitation conditions, violence related to drug trafficking, police raids, and limited access to several basic services, among other struggles. The community is a portrait of both local and national public policies of abandonment. This fact is clear after taking a quick walk through the narrow streets and alleys snaking through the community.

Cleber is the stepfather of two girls; one is 10-years-old and the other a baby. He arrives with other dads also invited to the meeting. A combination of suspicion and curiosity is palpable in the air.

I introduce myself as the meeting facilitator and begin by asking the men if they believe fatherhood and caregiving are a part of their daily lives. The question is a visceral way of beginning a dialogue—understanding what they think about fathering and finding out if they are likely to be easily moved by discussing it. After a short silence, one man finally dares to speak, and then everybody wants to talk at the same time—a cacophony of sound, the rush of voices sharing all kinds of examples. Some talk about education, some about health, discipline, prejudice, or gender inequality. A new group was born that evening. The meeting, which was designed as an introduction, is my first memory of the group of the dads and moms of Vila Joaniza; it continued to meet periodically on weekends over the next eight months.

A couple of months earlier, Promundo and partner NGOs Cultura Salud in Chile, and Puntos de Encuentro in Nicaragua, had completed developing a new methodology on paternity and caregiving. It’s a manual for the practice of paternity and caregiving that offers advice for health professionals on how to engage fathers through health services, especially prenatal and postpartum appointments. It includes examples of exercises to do during group sessions of fathers and couples—something that can be done in parallel with prenatal appointments and also in the communities.

Finally, the manual features recommendations for activities community activists can try to spread positive messages and provide advice to a broader public.

Program content and the methods used were influenced by research that revealed extremely high rates of violence against pregnant women. Another study conducted by Promundo, the International Men and Gender Equality Survey (IMAGES), discovered that men who grew up in homes where male caregivers shared household labor and caregiving tasks with females tended to repeat such equitable behavior in adult life. Additionally, the study showed that 80 percent of the fathers interviewed confirmed they had attended at least one prenatal appointment.

Program P is a resource developed as part of the global MenCare campaign. For more information, visit www.mencare.org. To learn about the the regional Latin America MenCare Campaign go to ¡Tú Eres mi Papá!

So it seemed right to intervene, to mobilize the community and health partners, working as a strategic entry point to promote both individual change, and community and institutional behaviors and practices. In Vila Joaniza, we started testing the methodology of Program P, “A Manual for Engaging Men in Fatherhood, Caregiving, and Maternal and Child Health,” a resource developed as part of the global MenCare campaign.

As meetings became more frequent participants felt more comfortable to share their stories. In one session about sexual health and reproductive rights, sexual violence came up as a topic. A female participant felt safe enough to share her story of having been raped; it had quite an impact on the group. A powerful silence took over the room as Maria told her story. When she had finished, something had changed.

Fewer men showed up at the next meetings; Cleber was one of them. When he finally did return, Cleber said he had been “really upset with the situation and had felt helpless.” He had recognized that what happened was not just Maria’s problem, but everyone’s problem and he felt as if the group should do something about it. He believed it was possible to find ways to deal with such situations. Cleber had understood that experiences with violence, prejudice and absence of rights (some of which he previously hadn’t recognized as rights) don’t just affect him individually; they affect the whole community. He began to understand how they perpetuate sexist culture.

He bore the brunt of negative comments aimed at him as a stepfather working to support other men’s children, his two stepdaughters. Even though he shared domestic labor with his wife, he had limited participation in the hygiene of the girls. Because distrust and fear of sexual violence are pervasive feelings in the community, he believed men were not supposed to bathe children. This is why men like Cleber believe they should keep their distance. Even though this point of view is shared by a majority of Brazilians, bathing children is considered an important responsibility for men to take on; at least, a skill to learn so they know how to do it. That awareness had quite an impact on the group. 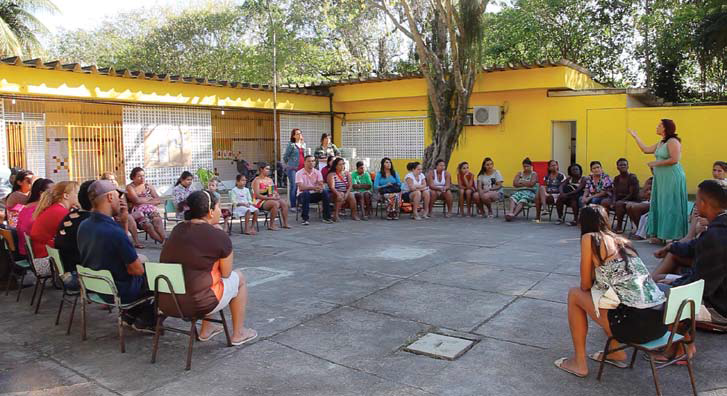 A meeting with parents in the Stella Maris Nursery to prepare for a Children’s Day event in Vila Joaniza, one of 700 favelas in Rio de Janeiro.

Today, Cleber is not afraid of bathing his stepdaughters. He also shared that several men who didn’t attend the meetings had heard stories told by women members of the group. They took ideas discussed in the group home with them and put them into practice. Cleber shared the story of Gabriela, one of the women in the group. She talked about the change in her sex life as a result of the discussions. As her husband started to share household labor with her, she would feel less tired and in a better mood at the end of the day, which in turn, made her feel more interested sexually. In addition, she reported her husband stopped talking abusively with their children and started enjoying the free time he had with them more.

Not long ago, the group decided to take their discussions beyond their meetings in the little daycare and to launch a campaign to engage men in the community. They chose to begin on October 12. Posters promoting positive paternity messages were posted by group members in places with the most visibility in the community—the Residents Association, at moto taxi stops, and the daycare itself, among other places. The group also organized a visit to the Family Health Clinic in the neighborhood. Their plan was to persuade the director to take the campaign into the health center. Among their efforts are encouraging fathers to attend prenatal appointments, including adapting the space so it feels friendlier and more welcoming to men.

In parallel with the Vila Joaniza experience, Promundo has developed research and interventions on paternity and caregiving in other spaces. For almost two years it has organized local and national meetings with partner NGOs and government representatives. Both in 2013 and this year, it organized two workshops on paternity, caregiving and health services, one local and one national and that featured representatives from the Ministry of Health and the Rio de Janeiro municipal government. These activities were part of the MenCare+ project, which aims to stimulate health institutions to promote paternity and caregiving practices. This support was requested by health professionals who didn’t know where to start, even though they understand that positively engaging men results in improving the population’s quality of life. Program P was introduced as the model. All the directors of health units in Rio de Janeiro were notified and the municipal government and Promundo were scheduled to offer trainings. Hopefully, before long we will have more stories of success to share. What about Cleber? His wife recently found out she is pregnant. They still don’t know if it’s a boy or a girl, but he already told us he will be a different dad. He invited us for lunch in his house next week. He wants to cook and show us how he takes care of his family.

Translated from Portuguese by Sebastián Torterola

Marco Aurélio Martins is a psychologist and deputy director of the Brazilian NGO Instituto Promundo. He is also the coordinator of the MenCare Campaign, MenCare+ and the MenEngage Network focal point in Brazil.

From “MenEngaged” to Men —and Women—Being Enraged By Gary Barker