Feminism is going to make it possible for the first time for men to be free.

Looking through the wall of windows behind the podium, I can sense spring coming to New England. On stage a group of male students hold banners that call for an end to violence against women. Flanking them like bookends are a male district attorney and male college president. The band of men surveys the large crowd assembled to commemorate International Women’s Day 2013 by celebrating the accomplishments of the New England Learning Center for Women in Transition (NELCWIT), founded in 1976 and one of the oldest organizations in the region providing services for survivors of domestic violence and sexual assault. From the stage Dave Sullivan, the Northwestern Massachusetts district attorney and Bob Pura, president of Greenfield Community College, are beginning a men’s pledge. I stand with the other men and recite the words the pair alternately lead us in, promising “never to commit, condone or remain silent about violence against women and girls” and to be “part of the solution to ending all forms of this violence.”

It is a poignant moment: men taking the White Ribbon Campaign pledge in the presence of a largely female audience at an International Women’s Day event. There was a time when it would have been unthinkable that even a single man would be part of the program (let alone a stage full of them) at an event to honor the work of a feminist organization founded by women sitting around a kitchen table not far from where we are tonight. That the White Ribbon Campaign—initiated by Canadian men after a man stormed a college in Montreal and murdered 14 women—is given a central place in an evening celebrating International Women’s Day is an expression of how far the movement for gender justice has come. This, I think, is the under-the-radar profeminist men’s movement beginning to come into view. 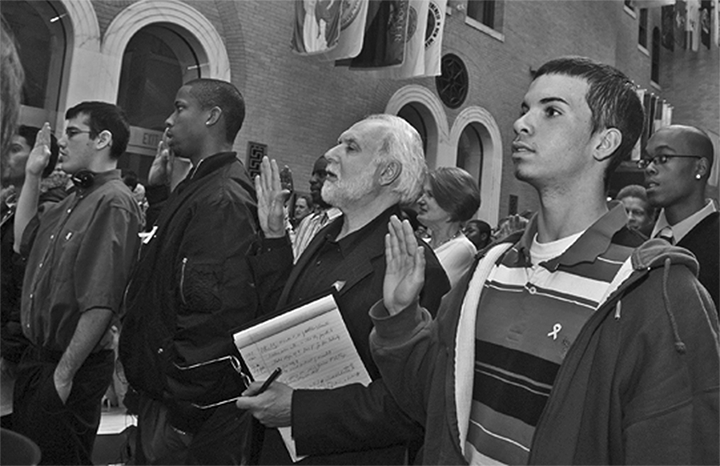 TAKING THE PLEDGE: Men affirm their commitment “to be part of the solution
in ending violence against women” at Jane Doe Inc.’s Massachusetts White Ribbon
Day, commemorated annually at the statehouse in Boston on or near International
Women’s Day. Voice Male editor Rob Okun is in center with notepad. Photo courtesy
Jane Doe, Inc.

For nearly two generations a growing number of men of all races and ethnicities in the United States and around the world have followed women both in working to prevent domestic and sexual violence and in redefining and transforming traditional ideas about manhood, fatherhood, and brotherhood. We’ve been called all kinds of names, but many of us describe ourselves as members of the profeminist* or antisexist men’s movement. This collection of writings from Voice Male magazine is an introduction to our work.

It has been nearly four decades since modern-day men began this transformative work, embracing many of the ideas (if not always the label) of profeminism. Through this wide-ranging collection of articles, essays, and commentary that appeared in Voice Male magazine over a quarter century, the breadth and depth of the profeminist men’s movement is revealed: from boys to men and fathering to male survivors and men of color; GBTQ men and men overcoming violence; men’s health and men and feminism. Woven together, they create a multilayered tapestry revealing a wide, rich swath of one of the most important social change movements you’ve probably never heard of.

Profeminist men hold the simple “radical” belief that gender and sexual equality are fundamental democratic goals and that women and men should each have the same rights and opportunities. Although marginalized and largely absent from the national conversation about gender in the mainstream media, modern-day profeminist men have been engaged in a sweeping critique of manhood and masculinity since the 1970s. The first large-scale organized effort was by the National Organization for Changing Men—now known as the National Organization of Men Against Sexism (NOMAS). It described its origins as “a loose-knit spontaneous social movement.”

In 1975 a group of male students in a women’s studies class at the University of Tennessee organized “The First National Conference on Men and Masculinity,” not in Boston, New York, or San Francisco but in Knoxville. Since that time, groups and organizations have sprung up across North America and in many parts of the world, following in the footsteps of the idealists in NOMAS, men in their twenties and thirties who had been inspired by the women’s movement. (Some early NOMAS figures went on to make important contributions to profeminism through books such as Refusing to Be a Man: Essays on Sex and Justice and The End of Manhood: A Book for Men of Conscience by John Stoltenberg, and The Making of Masculinities and A Mensch Among Men by Dr. Harry Brod.) What may have begun in part as a kind of “gentlemen’s auxiliary” to the women’s movement—providing childcare in part so mothers could participate in demonstrations—soon became an inquiry into a panoply of men’s experiences, in many cases reluctantly addressing the elephant in the room: male privilege.

Despite media messages that lag far behind on-the-ground truth, a progressive transformation of men’s lives is under way. As you will read in this chapter’s profiles of pioneering profeminist organizations, men’s involvement in antisexist activism grew out of a sense of justness and fairness heightened by men’s involvement in the civil rights and antiwar movements of the 1960s. For many those feelings easily carried over to women’s call for liberation, itself nothing less than a social justice imperative of obvious historical importance. (Acknowledging gay rights would come later.) Many men simultaneously felt threatened by and envious of women’s groups, women’s politics—the entire women’s movement. Most of us couldn’t keep up. Women’s bilingual fluency—speaking both “Emotionalese” and “Politicalese”—certainly made it challenging, but not impossible, for men to understand what was happening in those dizzying times, especially once we relinquished our heretofore unquestioned belief that in the world of gender there was only one official language: “Manspeak.” In those early days, some of us were confused and angry; some tuned out, choosing to ignore multiracial women’s marches toward liberation. Still, a small number of men began tuning in.

Acknowledging women’s fluency in Emotionalese, some of us haltingly began to talk about our struggles, our feelings, our inner lives. Trouble was, we were primarily doing so with the people we believed could hear and understand us best—women. Slowly, over time, more of us realized (often with a firm push from our partners, wives, or women friends) that who we really needed to be talking to was other men.

Despite the modest number of men involved, chinks in the armor of conventional manhood are visible, and, as our numbers grow, the chinks grow larger, threatening to crack open. Since the late 1970s, besides activities in the US and Canada, profeminist men’s work has been ongoing in Great Britain, Scandinavia, Brazil, Australia, New Zealand, South Africa, Mexico, and Central America. In more recent years India and Nepal have joined the growing list, as have a number of African nations. The roots of profeminist men’s work are deep. (See the Resource section, page 396).

In North America, antiviolence men’s centers and men’s programs have offered general-issue support programs for men, as well as groups for young men of color and GBTQ men. Fathers groups and a variety of programs for boys on the journey to manhood also are on the rise, as are programs addressing men’s health, including groups for male survivors of child sexual abuse. Groups for men acting abusively, known as batterers’ intervention, began in the late 1970s and now operate in most US states, often overseen by state departments of public health. There are also numerous educational initiatives engaging men in gender violence prevention efforts on college and high school campuses, in sports culture, and through a variety of community-based organizations.

Since the late 1970s, profeminist men’s activities have ranged from opeds and letters to the editor to newspaper signature ads, rallies, demonstrations and advocacy campaigns, as well as books and films—all aimed at offering an alternative to conventional notions of masculinities. As time and technology marched on, listservs were created, websites launched, electronic publications introduced, and social media campaigns inaugurated. (One of the most wideranging and comprehensive Internet resources is XYonline: Men, Masculinities and Gender Politics, long maintained by internationally respected profeminist scholar-activist Michael Flood.) As a sign of the growth of the movement, there are today ongoing collaborations with long-established women’s programs across North America and internationally, often through women’s initiatives at the United Nations. (Eve Ensler, the activist and author best known for writing The Vagina Monologues, made sure there was a “V-Men” page when she launched her organization’s V-Day website.)

In 2009, nearly 500 men and women allies from 80 countries met for four days in Rio de Janeiro at a symposium, “Engaging Men and Boys in Gender Equality.” The growing global movement, united under an alliance called MenEngage, now operates on every continent. Major conferences on related themes of men and women collaborating to prevent violence against women and promoting healthy masculinity for boys and men have been held in recent years across the globe. In North America there are numerous such events occurring each year from coast to coast, in our largest cities and at many of our most prestigious colleges and universities.

Recognizing the movement’s growth and potential to become even more of a force for social change in addressing gender justice issues, in 2013 the John D. and Catherine T. MacArthur Foundation awarded a two-year grant to establish the first Center for the Study of Men and Masculinities. Headquartered at the State University of New York, Stony Brook, it is being led by the sociologist and writer Michael Kimmel. The profeminist movement is beginning a new chapter. It’s been a long road to get here.

* Why the term “profeminist” rather than “feminist man” or “male feminist”? “Stripped to its essentials,” sociologist Michael Kimmel wrote in answering that question nearly a quarter century ago, “feminism involves the empirical observation that women and men are not equal in either the private or the public sphere and also the moral stance that such inequality is wrong and ought to be changed. Men may agree with this empirical assessment of women’s subordinate status and the moral imperative to work toward equality. In that sense men believe in feminism. But to be a feminist,” Kimmel wrote, “requires another ingredient: the felt experience of oppression. And this men cannot feel because men are not oppressed but privileged by sexism.”