Equal Protection for All Under the Law? 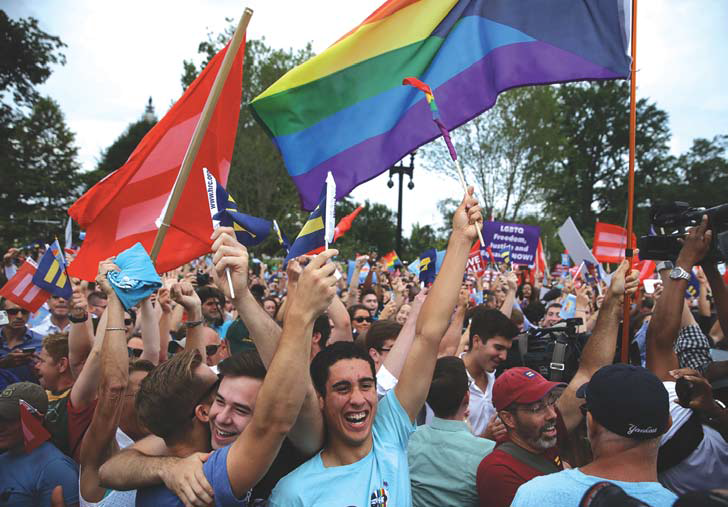 “At this point in the 2016 legislative session, we’ve seen hundreds of bills that target gay and transgender people introduced with fumbled attempts to validate their legitimacy,” said ACLU senior staff attorney Rose Saxe. “While the vast majority of these bills are dead in the water, several have passed, and more yet loom over us and threaten to chip away at the dignity and equality all of us deserve. We’ll continue fighting every bad law, and seeking affirmative protections.” The ACLU believes all people—including gay or transgender individuals—should be treated fairly and equally by the laws of their state, and should have the opportunity to earn a living, access housing, and participate fully in society.

1. Missouri, SJR39: The broad religious exemptions constitutional amendment that would allow religiously affiliated organizations receiving state funds, businesses, and individuals to discriminate against same-sex couples, children of same-sex couples, LGBT youth and more is dead in committee. In April, the bill was filibustered on the Senate floor for nearly 40 hours (a record), which earned it national attention and business, political and public condemnation. The ACLU is hopeful it won’t get resurrected.

2. South Carolina, S. 1203: A sweeping anti-trans bill that would force transgender people to use the wrong bathrooms in schools and government buildings and block localities from protecting transgender people from discrimination in sex-segregated facilities is dead in committee. Many opposed the bill, including Republican leaders and Governor Nikki Haley.

3. Tennessee, HB 1840/SB 1556: In April, Tennessee governor Bill Haslam signed into law a bill that allows counselors to turn away patients simply because they may conflict in some way with the counselors’ “sincerely held principles.” This could result in discrimination against not only gay and transgender people, but women and virtually anyone else with whom the counselor may disagree.

4. Mississippi, HB 1523: HB 1523, a broad bill that would allow officials to turn same-sex couples away, and permit widespread discrimination against LGBT people signed into law in April, continues to raise questions of legality and criticism. Hundreds gathered in protest in May to call on the legislature to repeal the measure.

5. Anti-transgender municipal ordinances: In late April, Oxford, Alabama’s city council passed an ordinance making it a crime, punishable by a $500 fine and possible jail time, for a transgender person to use the bathroom according to their gender identity. The ACLU is investigating a possible lawsuit to strike down the discriminatory ordinance. A copycat ordinance was introduced in Rockwall, Texas, but failed after protests by the local community and hours of testimony against the proposed ordinance.

6. Federal Title IX: In early May, Senators Al Franken (D-MN) and Tammy Baldwin (D-WI), together with 38 of their colleagues, sent a letter to Education Secretary John King urging the Department to issue comprehensive guidance on the scope of protections afforded to transgender and gender non-conforming students under Title IX (https://www.franken.senate.gov/?p=press_ release&id=3452). It urges the Department to clarify that state laws, such as North Carolina’s HB 2, that mandate systemic, statewide violations of federal bans on sex discrimination like Title IX run afoul of the law, and thus jeopardize states’ continued receipt of federal funding.

7. North Carolina, HB 2: Following protests at the end of April when the North Carolina legislature reconvened and nearly 200,000 signatures demanding the repeal of North Carolina’s anti-LGBT House Bill 2 were delivered to the office of Gov. Pat McCrory, there are continued and intensifying calls for full repeal of HB 2. In late March, the ACLU with partner organizations filed a lawsuit challenging the sweeping new anti-LGBT law and in April added new clients (https://www.aclu.org/news/three-more-plaintiffs-join-lawsuit-against-north-carolinas-discriminatory-anti-lgbt-law).

Allison Steinberg is the communications strategist for the ACLU. For more information, contact her at asteinberg@aclu.org.