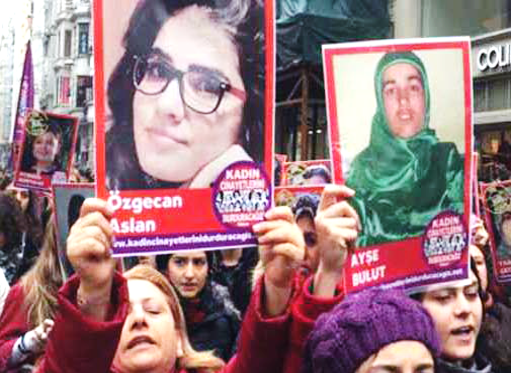 Patriarchy and masculine violence have secured their throne in Turkey, even though some (hilariously) hailed the president as a “revolutionary” who tore down the towers of hegemonic masculinity.

Last February, a 20 -year-old woman was reported missing in the Turkish city of Mersin. Two days later, her body was found; she had been burned by a bus driver aided by his own father and a friend. Such a tragic, inhumane, and maddeningly routine murder isn’t the first and won’t be the last.

In the past year in Turkey, men murdered nearly 300 women. These killings are in addition to thousands of incidents of rape, domestic violence, harassment and constraint. It is no surprise that people turn a blind eye to unreported incidents of violence, not to mention hundreds of LGBTQ individuals murdered, suicide victims, or survivors of legal negligence.

It isn’t that women and LGBTQ people are politically oppressed and left without an option, although the leader of “New Turkey” singled out feminists and LGBTQs while decreeing that men and women can’t be equal. (The first case the president took to court as the leader of Turkey was against a queer activist. If that weren’t appalling enough, in a meeting organized by a progovernment women’s organization, women crazily applauded his remarks.)

Patriarchy and masculine violence have secured their throne in Turkey, even though some (hilariously) hailed the president as a “revolutionary” who tore down the towers of hegemonic masculinity. Masculine violence is a virus, and like a virus seems incurtable at first, consuming joy and feeding on silence and fear.

Of course, it’s not only about Turkey and its reactionary politics that encourages acts of violence aimed at undermining diversity. From the approximately 2,500 brides burned in their kitchens in India so grooms don’t have to pay dowries, to Boko Haram kidnapping more than 300 schoolgirls in Nigeria, patriarchal beliefs are being asserted and reasserted. (Girls, the Nigerian outlaws say, should not go to schools but should be forced to marry at earlier ages. And in Russia, Human Rights Watch recently reported that authorities there have “effectively legalized discrimination against LGBT people.”

Rape has long been used as a systematic weapon against women by Serbian, Rwandan, Chilean, and American soldiers. Mainstream media outlets seem to be complicit, titillated as they broadcast reports spotlighting the pornography of violence.

Victims aren’t heard from unless they’ve come up with an “interesting angle” and then are squeezed in between commercials and what’s “coming up next.” Violence against women and LGBTQ people is on the rise globally and “gendercide” has never looked so frightening, or inequality between genders so crushing.

What do we want? We want to stop violence in all forms, no matter who perpetrates it and for whatever reason. We want to raise our voices: men, women LGBTQ—all together—against gendered violence and negligence. We want to unite and strengthen our ties with our allies so no one can hurt any one of us any longer. We want to maintain that we are here to fight against any form of gendered violence. Finally, we want to inspire others to do the same.

Murat Goc teaches English language and literature at Pamukkale University in Turkey and is a member of the Initiative of Critical Studies of Masculinity, a network of academics and activists who work to ensure gender equality.

Last fall, the Initiative organized an international symposium on masculinities, and it conducts workshops across Turkey and publishes a biannual academic journal.