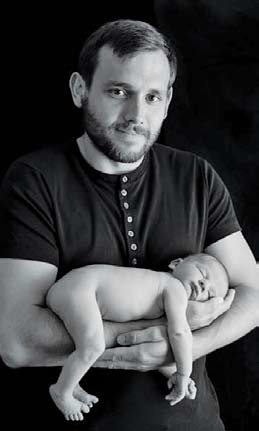 Al Ferguson with his son; documents his life as a dad on his blog The Dad Network.

“Aww, it’s so nice of you to babysit and give mom a break.”
“I guess you got stuck with the kids today.”
“You’ve got a good helper here!”

Comments like those above are just some of the things that have been said to dads who have been looking after their children, according to testimonies on Reddit, where the topic sparked a flurry of conversation after a father shared an image of a T-shirt bearing the slogan: “Dads don’t babysit, it’s called parenting.”

The man in the picture modeling the T-shirt is Al Ferguson from The Dad Network (thedadnetwork.co.uk). He posted a picture of himself online a while ago wearing the T-shirt, but the image resurfaced on Reddit, and it’s got people talking about parenting stereotypes.

“I’ve had people ask me ‘Are you looking after the kids today?’ Or, ‘I can tell you dressed the baby today.’

“It’s just out of date. The modern dad is more active in their family life than they were historically. It’s out of date to assume the mum is the primary caregiver,” Ferguson says.

Although the number of dads who choose to stay at home and care for their children is on the rise, a 2014 study by the Pew Research Center showed that only 16 percent of primary caregivers are men (www.bbc.co.uk/news/magazine-27626510). More than 3,000 people have responded to the suggestion that dads are only “babysitting” when they are, of course, parenting.

“It hurt really bad when I was a new stay-at-home dad and people would ask about me babysitting…. It really made me almost cry sometimes because it was like they couldn’t see me as a caretaker,” one dad wrote. Others broadened the conver-sation to talk more generally about the sexism that dads experience.

“Reminds me of all those ridiculous commercials where they make it seem like dads don’t know how to take care of their kids while mom is away,” said another father. “They make a mess, kids go crazy, they don’t know how to cook, clean, change a diaper…Where’s all the outrage?”

BBC journalist Emma Wilson can be reached at emma.wilson@bbc.co.uk. A version of this story appeared on the BBC’s news blog, http://www.bbc.com/news/blogs-trending-36144487.

A 2014 study by the Pew Research Center shows that the number of dads who choose to stay home and care for their children and families has quadrupled over the past 25 years.

Make no mistake—fathers who are the primary caregiver for their children are far from the norm. In fact, they are only 16 percent of all stay-at-home parents. But that number is up from 10 percent since 1989, when Pew started analyzing data. The steady growth since then suggests that these numbers represent a growing trend, not a fad.

“It’s up from 1.1 million to 2 million,” says Gretchen Livingston, one of the study authors. More significantly, the number of men who say they stay at home specifically to take care of their home and children is at an all-time high, more than four times the rate of fathers who gave that same answer in 1989.

“When I first started being a stay-at-home dad [in 2000], I was the only father in New York in Riverside Park,” says Jacques Elmaleh, about staying at home with his children. “Slowly there were more and more.”

In fact, a yearly meeting for Chicago-based stay-at-home dads that started in 1995 has now grown into a national non-profit organization with 70 chapters across the U.S. and several in Canada.

Through its annual conference and its active social media presence, the group helps dads connect and offers advice on the same types of things about which moms confer—diaper rash, teething pain, and playground politics. They also provide moral support.

“Stay-at-home dads have a unique situation—we don’t have role models so we are kind of doing this on our own and trying to figure out how to navigate the relationships that are different than we expected them to be when we first got married,” says Al Watts, former president of the National At-Home Dad Network (http:// athomedad.org/).

As women have taken on more high-paying careers, the assumption that they’ll stay home with the children has become less automatic. There is now more room for stay-at-home dads than ever.

For more about the Pew report, go to: http://www.pewsocialtrends. org/2014/06/05/growing-number-of-dads-home-with-the-kids/.

A Response to Concerns