Crying is a courageous act. That might sound paradoxical, but juxtaposed against the expectation of male stoicism, tears are subversive and powerful. And, at long last, more and more men are casting aside toxic masculinity’s restrictive norms to live into healthier male identities. Two recent political moments, to me, embody this movement and all its attendant challenges and triumphs. The first happened not long ago: In a speech decrying Donald Trump’s executive order banning refugees from seven nations, New York Senator Chuck Schumer— surrounded by refugees—choked up. His eyes filled with tears as he labeled the president’s action “mean spirited and un-American.” This poignant moment was not shocking, in and of itself. It shouldn’t be surprising that the Senate minority leader’s heart swelled with emotion as he spoke out against the ban, flanked by those who stand to concretely suffer from its implementation. What is notable, however, is the speed with which the president pointed out how Schumer transgressed traditional masculine bounds. As airports thronged with protesters, Trump blamed the ensuing chaos on “the tears of Senator Schumer.” Later, in an interview, Trump claimed that Schumer must have been faking the tears—ginning up emotion for the cameras—seemingly oblivious to why Schumer might be overcome with emotion. Trump’s dismissive and bullying attitude is simply a grotesque and overt iteration of the kinds of criticism men always risk by expressing their emotions.

If that exchange reveals the costs men engender by emoting openly, another moment showed exactly why men everywhere still ought to honestly share their feelings: In January, then-President Obama surprised Joe Biden and awarded him the Presidential Medal of Freedom. Biden was visibly overcome by the magnitude of the moment. What followed was a tender display of affection between the two men. The beautiful exchange revealed their deep love for one another, nurtured over the eight years they worked together. There was no shame in Biden’s tears, nor should there have been.

These vignettes are quite different from one another, but a common theme runs beneath: There is great power in men expressing their emotions. Not power in the Trumpian sense—power over others, power that denigrates and abuses—those are just facile and shallow expressions of aggression. Rather, emotional honesty carries far more radical potential. Trump is rightly afraid of Schumer’s tears because they reveal the inhumanity of Trump’s cold dispassion in the face of human suffering. Biden’s tears and Obama’s affection are emblematic of the emotional bond that helped forge the most consequential modern presidency since FDR.

I can’t remember exactly when I learned that, as a man, I wasn’t supposed to cry. There’s no pivotal moment I can point to, no crystalline memory of bullies mocking my tears, or of a male family member telling me to “man up.” In fact, I had it better than most. I grew up in a home that encouraged emotional expression. I had plenty of emotive male role models like my father and my pastor, who modeled healthy, expressive masculinity. And yet, despite these positive role models and the absence of any particular trauma, by the time I graduated from college I firmly understood that bottling my emotions was part of what it meant to be a man. 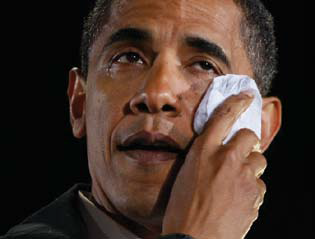 This expectation of stoicism didn’t only extend to painful feelings, either. Growing up, the “cool” guys were always the ones who shied away from any excess emotionality. Anything more expressive than baseline contentment could also serve as cause for ridicule. I remember, in my freshman year of high school, I took an elective architecture course and made the grievous mistake of becoming enthralled by the subject. I failed to recognize that most students took the class because they thought it would be easy, not because they found the topic interesting. I quickly found my enthusiasm and verve for drafting mocked by my classmates. One group of boys, in particular, liked to do impressions of my excitement. Sometimes they threw bits of lollipop in my hair. Quickly, I discovered that—to avoid their disdain—I needed to curb my passion, or at least its overt expression.

I became quite adept at the kind of emotional repression I had so often seen modeled and socially rewarded. I learned how to quell joy and squelch deep sorrow to mere dissatisfaction. I discovered that, with a little practice, I too could pretend I cared about nothing, and reap the benefits of seeming cool, aloof, detached.

What I failed to realize, however, is that emotional suppression leaves you empty and unfulfilled. Though it spared me from some verbal barbs, the price was far too great. Deep emotions are not incidental or superfluous, they represent the very best of who we are as humans. In an attempt to appear strong, I deprived myself not only of the ability to feel deeply, but also of its attendant power. Blunting my emotions damaged my ability to enjoy the best aspects of life: I was no longer able to feel deeply, and my aversion to being vulnerable diminished my capacity to love. For a while, I voluntarily capped my true potential, just to avoid possible ridicule. What a fucking mistake.

This is what Trump, and men like him, will never understand. Destroying one’s capacity to feel ought never be interpreted as a sign of strength. Shutting out refugees with callous indifference is weakness, nothing to celebrate. Treating women merely as objects to conquer makes you look pathetic, not virile. Viewing all personal interaction through a lens of dominance and submission blinds you to the fact that real fulfillment is borne from cooperation, not aggression. Trump is scared of those who look and act differently, afraid of deep personal connection, fearful of appearing vulnerable. Sad!

That’s the tragic irony of toxic masculinity: Though it develops from the desire to appear strong and confident, it leaves those who bear it weak and brittle. Far from invulnerable, this paleo-masculinity is exposed the moment it runs up against anyone courageous enough to feel. Children attempt to flee the violence of their homeland; one man says they might grow up to be terrorists and coldly turns them away, the other cries with them and offers refuge. You tell me who looks strong.

Benjamin Perry is a graduate of Union Theological Seminary, where he studied social ethics. He works as an associate editor for Time Inc.